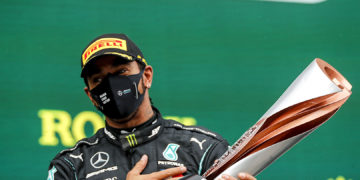 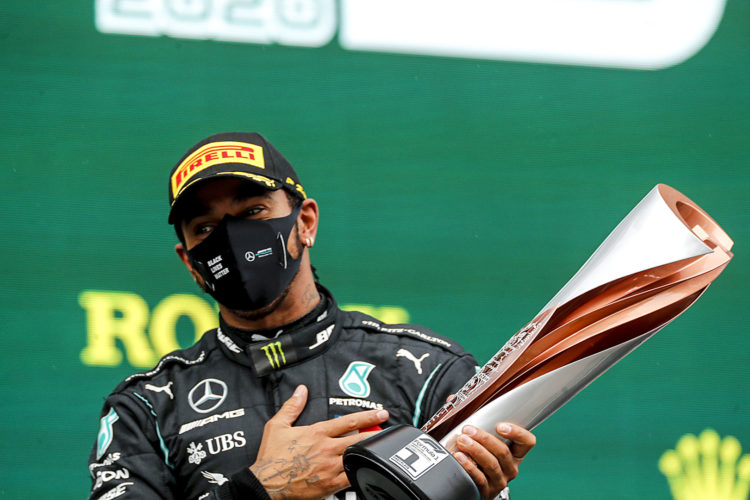 “I know often I say “it’s beyond my wildest dreams” but I think my whole life secretly I probably have dreamt as high as this,” said Hamilton about his record equalling seventh championship. “It felt so farfetched. I remember watching Michael [Schumacher] winning those championships, and all us drivers are always doing the best job we can and just to get one or two, or even three, is so hard. To get so seven is just unimaginable.

“But when you work with such a great group of people, you really communicate and trust one another, and listen to one another there’s just no end to what we can do together, me and this team. And I’m so proud of the work we’ve done. Them trusting me out there today, that comes with experience obviously but what a day, it’s a lot to take in.

For the first half of the race it looked like it was going to be one to forget for Hamilton as he struggled for grip on the wet tyres and was over a pitstop worth of time behind the Racing Points at the front.

“Today we knew coming here it was already such a difficult weekend, we weren’t really massively disappointed with our qualifying position. We knew that we were kind of on the back foot and we did the best we could but we learnt a lot. This is what we do as a team, there’s no blame game, we hash it out and we continue to try and improve our communication so that we can make moves forward.

“We don’t always get everything perfect, but today we had that small moment at the beginning of the race with the new tyres. And then I couldn’t get past Seb [Vettel] for a while, at that point I could see Albon pulling away and I was thinking “Jesus, this race is falling away from me. Falling through my fingers.” But I just kept my head down, just kept believing that I’d eventually pick up pace of some sort at some stage, and that’s what I did.”

As the race progressed the Mercedes driver made his mark on the race by weathering the difficult graining phase of his intermediates and learning from past mistakes to decide against a second pit stop as those around him were doing. From there, Hamilton just had to pass Sergio Perez, who had also opted not to pit again, before he was in clean air and able to pull out more than a 30 second gap to Perez over the last 20 laps.

As the Brit’s intermediates were worn down to slicks by the end, Mercedes attempted to call him in for a late stop as there was rain forecast for the last few laps, but again, Hamilton decided it was safer to stay out and deal with whatever may come rather than lose the gap and potentially have an incident in the slippery pit lane.

“There was a point that Seb [Vettel] was pulling away from me and I couldn’t figure out at the time what it was. I was checking my temperatures, I didn’t know whether it was because my tyres were overheating or they were too cold. I think I went through the real rough phase of the graining of the tyre and then it started to come back, the grip started to come back.

“The track was drying in areas and I was improving my driving lines the whole way through the race, I started to pick up pace and then Seb [Vettel] pitted. For me, I knew that wasn’t the right choice personally. I decided to stay out and as the tyres got more and more slick, that’s exactly what we needed but fortunately because of that intermediate tyre, it holds temperature.

If I went out on new slicks I wouldn’t have made it around, it was the best decision. You remember I lost a World Championship in the pit lane, so I learnt my lesson from 2007, that’s for sure. I felt like I really had it under control, the grip was feeling good and I was going to deal with the rain if it dropped.”

Hamilton was audibly emotional on the team radio after taking the chequered flag and again as he started his post-race interview.

“Definitely a bit lost for words. Naturally I have to always start with saying such a huge thank you to all the guys that are here and all the guys back at the factory, in both our factories, and all our partners for enabling us and giving us this opportunity. I wouldn’t be able to do this if I didn’t join this team and the journey we’ve been on has been monumental.

“I’m so proud of them. I want to also say a big, big thank you to Team LH for sticking with me all these years. And to my family, we dreamed of this when I was young when we were watching the Grands Prix. This is way, way beyond our dreams.”

Hamilton said that he hopes his achievements can help to inspire young people to follow their dreams no matter what challenges are in front of them, saying: “I think it’s so important for kids out there to hopefully see this and don’t listen to anyone that tells you you can’t achieve something. Dream the impossible and speak it into existence. You got to work for it, you’ve got to chase it, and you’ve got to never give up and never doubt yourself.”

How does it feel to be right in the middle of our World Championship celebrations?

The new seven time World Champion admitted that this year has been very hard on him mentally, as it has for many around the world. He is hoping for a better year in 2021 and will wait to celebrate his achievements until he can do so with his friends and family.

“I haven’t gone out, I haven’t gone to dinner, I’ve just been staying in my bubble. I get room service every day and not really anything exciting. That’s really because I’ve a championship to fight for so I didn’t want to take any risks. I think this year I sacrificed more than I have in my whole life, and that’s made it quite difficult. I’m going to go home tonight, most likely it’s not going to be the most exciting thing.

“I’m probably just going to maybe watch the race, I usually have a minestrone soup and definitely have a bottle of wine. Making memories like this, I’m going to wait until I can be around my family and be around with my friends because I want to be able to share it with them. So there are no plans. I didn’t make any plans going into this weekend because I don’t like to give that added pressure of the what ifs. I just came here to do the job that I’ve done today. I’m really hopeful for a better year next year and I would love to stay.”

Hamilton added that he felt very proud of this race and how he used what he’d learnt from mistakes and disappointments over the years to secure the win and take the World Championship in the best way possible.

“Out of a lot of races that I’ve done, I feel so proud of this one today. There were a lot of challenges along the way. I was thinking about Monaco 2008 and what I did with the tyres back then, and I was thinking about China 2007 when I lost the World Championship. All these things that I learnt along the way, I was able to apply today and that’s why you saw the gap in the result that I got.”

Looking to the future, the Mercedes driver doesn’t feel ready to retire just yet but is passionate about using his platform, and encouraging Formula 1, to do what they can to become a positive force for change in human rights issues and sustainability.

“I feel like I’m only just getting started, it’s really weird. I feel like we’ve got a lot of work to do here. We’ve only just begun our work to hold ourselves accountable as a sport, to realise that we’ve got to face and not ignore the human rights issues that are around the countries that we go to. How can we engage with those countries and help them, empower them to do more to really change and not ten years from now or twenty years from now, now.