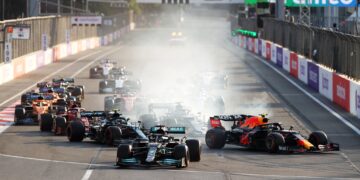 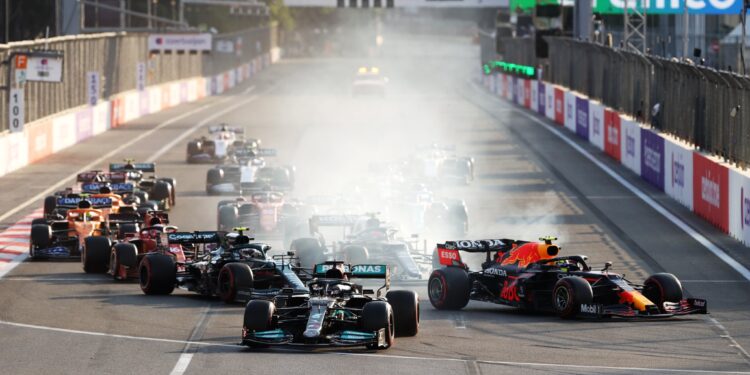 Azerbaijan Grand Prix – Mercedes’ Lewis Hamilton has explained that he accidentally clicked a button that “switches the brakes off” which caused him to lock up into Turn 1 at the restart.

The Azerbaijan GP was red flagged with just a handful of laps left due to Max Verstappen suffering a huge tyre blowout on the pit straight and crashing into the wall. This was eventually converted into a red flag and the cars lined back up on the grid to complete the remaining laps in a dramatic sprint to the finish.

With Verstappen out, Hamilton only had Red Bull’s Sergio Perez between him and victory. When the cars got going again, Hamilton initially made a good start and was wheel-to-wheel with Perez. However, the Mercedes driver locked up and ran wide into the runoff area. The Briton eventually finished down in 15th place.

The 36-year-old has explained that he had accidentally clicked a switch that “basically switches the brakes off”.

“On the restart I think when Perez moved over towards me, I clicked a switch and it basically switches the brakes off,” said Hamilton speaking to Sky Sports. “It just went straight. I had no idea that I’d even touched it.

“I put everything on the line and I fought as hard as I could today. “It’s very hard to take, but mostly just really sorry to say to men and women in the team.

“We’ve worked so hard for these points and, but we’ll regroup and come back stronger.”

With his main Championship rival Verstappen retiring from the race, Hamilton had looked to capitalise on the Dutchman’s misfortune and seize back control of the championship. However, Hamilton was pragmatic after the incident considering that Mercedes looked to be struggling earlier in the weekend.

“Actually it’s a quite a humbling experience to be honest,” said Hamilton. “We’ve worked so hard this weekend to come back out of the top 10 and it was looking so good.

“It was very unfortunate for Max. I would say today is a good stroke of bad luck.”