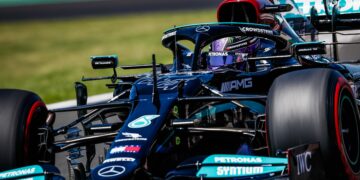 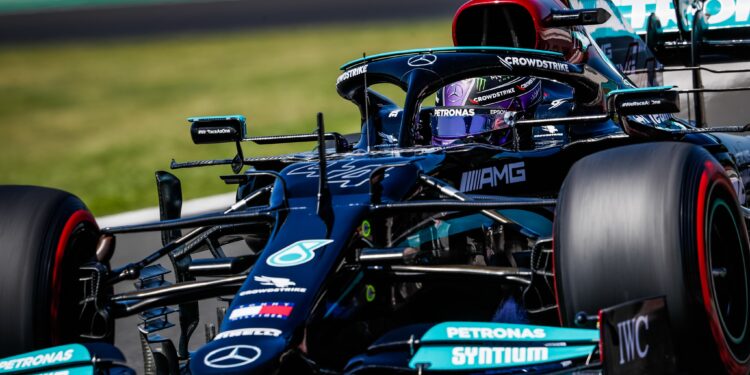 Hamilton’s time of 1:15.419 was three tenths faster than his teammate Valtteri Bottas. Championship rival Max Verstappen will start in third place ahead of his teammate Sergio Perez. The Mexican was unable to cross the line in time for a final qualifying run and will start in fourth.

Hamilton and Verstappen went out on their final runs but were unable to improve their times. However, the front running teams split their strategies ahead of tomorrows’ race. Both Red Bull’s qualified on softs in Q2, Mercedes’ Hamilton and Bottas set their fastest Q2 times on the medium tyres.

Pierre Gasly regains some qualifying form and will start his AlphaTauri on fifth place ahead of McLaren’s Lando Norris in sixth.

Charles Leclerc will start in seventh place and will be the only Ferrari to start in the top ten. The session was red flagged when, in Q2, Carlos Sainz lost the rear at the final corner and ploughed into the barriers. He was unable to get going again and will start from 14th place. This will be a blow for the Spaniard, who set the fourth fastest time in Q1.

The Alpine duo of Esteban Ocon and Fernando Alonso will start in eighth and ninth respectively ahead of the Aston Martin of Sebastian Vettel.

Daniel Ricciardo was unable to break into Q3 and will start down in 11th place, but will have free choice of tyres for the Grand Prix on Sunday. Lance Stroll in the other Aston Martin will start in 12th.

Both Alfa Romeo cars reached into Q2 with ex-World Champion Kimi Raikkonen in 13th and teammate Antonio Giovinazzi in 14th. The formers’ fate was unknown after Free Practice Three as he was involved with two incidents – however the Italian escaped a grid penalty.

Yuki Tsunoda was unable to match his teammates’ pace and qualified his AlphaTauri down in 16th place.

The two Williams drivers of George Russell and Nicholas Latifi will start in 17th and 18th respectively ahead of Nikita Mazepin in 19th for Haas.

Mick Schumacher was unable to take part in qualifying due to a heavy crash in Free Practice Three. His Haas team were unable to repair his car in time.