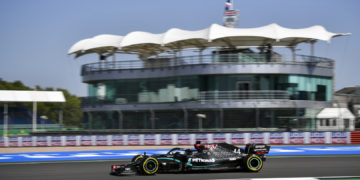 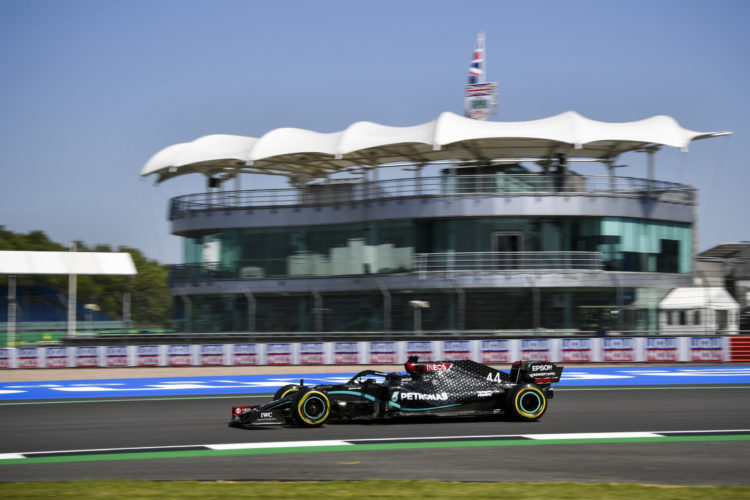 British Grand Prix – Lewis Hamilton has taken victory at Silverstone, despite suffering a late puncture that saw him cross the line on three wheels.

Click here for the complete results from the 2020 British Grand Prix.

Lewis Hamilton has led the British Grand Prix from start to finish, converting his pole position into victory despite his tyre failing on the final lap.

Hamilton led the race from start to finish, shadowed closely by teammate Valtteri Bottas from P2. It was a straightforward race for Mercedes, with the only headache being having to stack their drivers for a pitstop under the Safety Car quarter of the way through the race.

The long second stint caused some last minute drama, with Valtteri Bottas suffering a left front puncture within sight of the chequered flag. He managed to get back to the pits for a change of tyre and emerged outside of the points. Starting the final lap, the same problem hit Lewis Hamilton – his left front failed and he completed the entire lap watching his lead ebbing away.

Max Verstappen tried to hunt down the lead Mercedes to steal the win, but was just too far behind. Ironically, this was due to a late race pitstop to take the fastest lap point away from Mercedes, meaning that they were further behind than they would have been otherwise.

Hamilton thus took victory by 5.8 seconds over the chasing Verstappen, with Charles Leclerc inheriting the final podium spot with a solid drive for Ferrari. Daniel Ricciardo finished P4 for Renault, having won out in the battle with the McLarens. Lando Norris claimed P5 at his home race, three seconds behind Ricciardo and four seconds clear of Renault’s Esteban Ocon.

Pierre Gasly finished P7 for Alpha Tauri, with teammate Daniil Kvyat being the cause of the aforementioned Safety Car. The Russian appeared to suffer a tyre failure into Maggotts, and had a huge crash that brought out the Safety and Medical Cars while the race was neutralised. He was uninjured, but appeared to have gotten a fright in the crash as he pushed a cameraman out of his way behind the barriers.

Alex Albon finished P8, recovering strongly after a first lap clash with Haas’ Kevin Magnussen that took the Dane out of the race. Albon was given a five second time penalty, and wound up at the back of the grid following an early pitstop for Hard tyres.

Lance Stroll finished P9 for Racing Point, the only one of the pink cars to take part after the team failed to get Nico Hulkenberg’s car fired up ahead of the race.

The final point went to Ferrari’s Sebastian Vettel after a dismal race from the German after multiple issues and struggles throughout the weekend.

Valtteri Bottas was resigned to P11, trying desperately to steal the final point away from Vettel on the final lap. His puncture has cost him dearly in the Driver’s Championship with Hamilton holding on to take the full 25 points. George Russell finished P12 for Williams, with Carlos Sainz falling down to P13 as he also suffered a left front puncture on the penultimate lap.

Antonio Giovinazzi finished P14, having picked up a five second time penalty for a Safety Car transgression during the race. The Alfa driver just about held off Williams’ Nicholas Latifi, who settled for P15, ahead of Romain Grosjean. The Haas driver was shown the black and white during the race for unsportsmanlike driving while defending against Renault’s Daniel Ricciardo. Grosjean was the only driver not to pit under the Safety Car, meaning he was out on old Medium tyres and trying desperately to hold drivers behind him on considerably fresher tyres. Kimi Raikkonen was the final classified runner, having had a miserable race. While running last, he suffered a front left puncture as his front wing failed and sliced his tyre at Becketts. He took on fresh tyres but didn’t have time to make any progress towards the end.