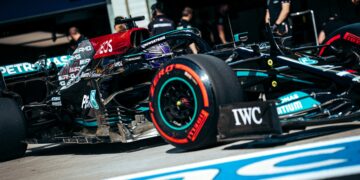 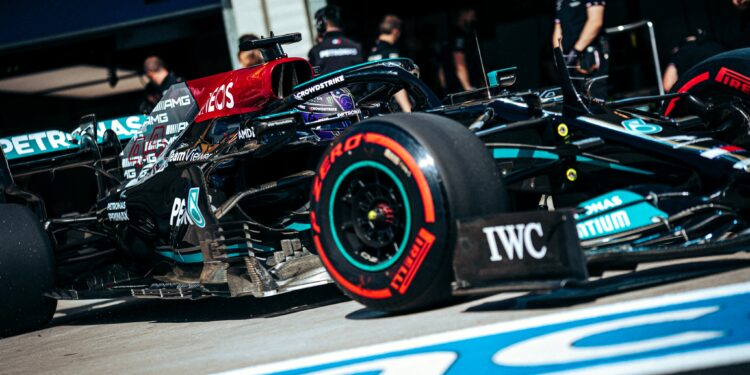 The Briton, who will receive a 10-place grid penalty for an engine change, set a time of 1:23.804 which was just a tenth and a half faster than an impressive Charles Leclerc in the Ferrari.

With the grippier surface for this season compared to last, the teams had to get up to speed with much faster laptimes compared to what was predicted. Windy conditions saw many of the drivers struggling in the breaking zones, and the threat of rain for the rest of the weekend means that this could be the only dry running.

McLaren’s Lando Norris set the sixth fastest time ahead of the two Alpine cars of Fernando Alonso and Esteban Ocon. The latter stopped out on track after the chequered flag when his car was overheating on the practice start.

Pierre Gasly continued his top-ten form for AlphaTauri and finished in ninth, ahead of Antonio Giovinazzi in the Alfa Romeo.

AlphaTauri teammate Yuki Tsunoda set the 11th fastest time, a second off the benchmark. Carlos Sainz, who will take a new engine for this Grand Prix set the 12th fastest time.

Lance Stroll set the 13th fastest time for Aston Martin, ahead of Daniel Ricciardo in the McLaren. Kimi Raikkonen, in his last season in F1, set the 15th fastest time in the other Alfa Romeo.

Sebastian Vettel was down in 16th for Aston Martin ahead of the two Williams cars of Nicholas Latifi and George Russell. The two Haas drivers of Mick Schumacher and Nikita Mazepin were 19th and 20th.