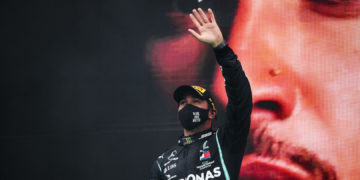 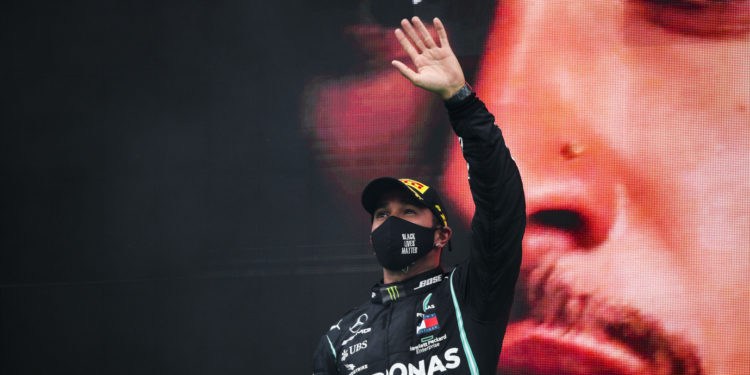 Portuguese Grand Prix – Lewis Hamilton had to contend with a damp, slow start and deal with a cramp on his way to making Formula 1 history.

Starting on pole, Hamilton dropped down to third on the first lap after rain and low temperatures meant he struggled for pace on the medium compound tyres. While the tyres were getting into their working range, the two Mercedes found themselves trailing McLaren’s Carlos Sainz around the Portimao track.

The usual order was reestablished by lap 6 with Valtteri Bottas leading Hamilton but by lap 20 the Brit had sailed past his teammate. From then on Hamilton was unstoppable, sailing to his record-breaking 92nd race victory and lapping all but the top four as he did.

“They said it was going to rain straight after the race but we got some spitting just at the start,” said Hamilton. “I had a good start but then going into turn 7 had a huge oversteer moment and I didn’t know what was next so I really backed off massively.

“Arguably I should have probably tried to defend from Valtteri, but I was like, ‘I’ll come back later on’ and fortunately that’s what I was able to do. Today was tough but it was all about temperatures today and that’s something I was able to, with the setup, I preempted.”

The only opposition Hamilton faced in the latter part of the race was himself, as he had to deal with racing with a cramp in his leg for the final ten or so laps.

“It’s an incredibly physical sport but I had a cramp in my right calf, I had to lift, I was lifting quite often down the straight because it was about to pull. Pretty painful, but I had to somehow get through it because it is what it is and you can’t lift the whole lap.”

Hamilton credited the incredible success he and Mercedes have seen over the past few years to the teamwork and work ethic shared between the team and all their partners. “I really owe it all to these guys here and back at the factory for just their tremendous work. They’re continuously innovating and pushing the barrier even higher every year, the target, it’s just been such a privilege working with them and I’m so grateful for all the moments.

“The reliability has been absolutely incredible thanks to Mercedes, and to Petronas, and all our partners who continuously are pushing. No one’s sitting back on the success, everyone’s pushing, pushing and pushing and pushing. That’s the most incredible thing to be surrounded by because it inspires you, that collaboration, there’s nothing quite like it.”

When Hamilton joined the Mercedes team in 2013, they had only recorded one victory from the six podiums they had achieved in three years, while the Brit himself had 21 wins. Once 2014 and the hybrid era arrived though, it became more rare to see a Mercedes off the podium.

“I never, I could only have ever dreamed of being where I am today,” commented Hamilton. “I didn’t have a magic ball when I chose to come to this team and partner with these great people but here I am and what I can tell you is that I’m trying to make the most of it every single day.

“Everything that we do together, we’re all going in the same direction and that’s really why you’re seeing the success that we’re having. My dad’s here which is amazing, and my stepmum Linda’s here, and Roscoe so it’s a very blessed day.”

This afternoon’s victory means that Hamilton is now out on his own at the top of the number of Formula 1 victories table, but in the post-race interview he wasn’t able to put into words how he felt about the incredible achievement. “It’s going to take some time for it to fully sink in. I was still pushing flat out coming across the line so I’m still very much in race mode mentally but yeah, it’s going to be, I can’t find the words at the moment.”