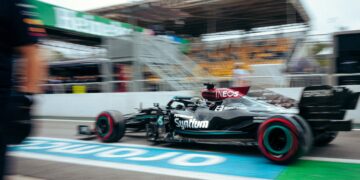 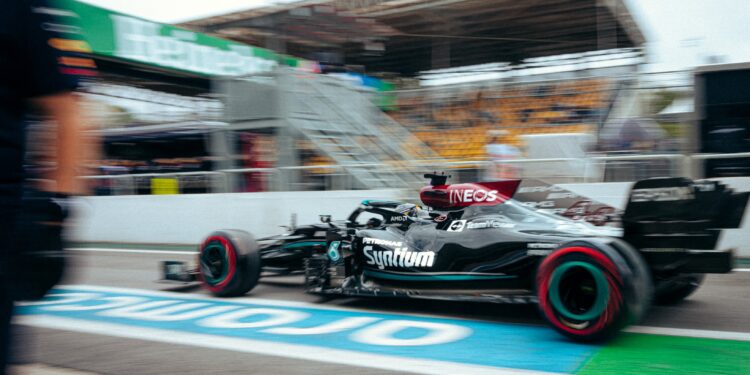 Sao Paulo Grand Prix – Lewis Hamilton will start at the back of the pack for Saturday’s Sao Paulo Sprint after his Mercedes cars’ DRS mechanism was found in breach of technical regulations.

FIA Technical Delegate Jo Bauer noticed that the Drag Reduction System (DRS) mechanism on Hamilton’s Mercedes seemed to open up more than the allowed gap of 85mm. The matter was referred to the stewards for investigation where is was deemed that the wing was in breach of regulations.

Hamilton’s rear wing was impounded by the FIA following qualifying with Mercedes permitted to swap the wing for Free Practice Two on Saturday.

Using a specialist tool, Hamilton’s rear wing was assessed and it was found that the rear wing did in fact open up more than the 85mm that is allowed and as such was in breach of Article 3.6.3 of the technical regulations.

The stewards have therefore disqualified Hamilton from Friday’s qualifying and he will start at the back of the pack for Saturday’s Sprint Qualifying. This will surely hurt Briton’s hunt for a eighth title whose woe is compounded by a five-placed grid penalty for Sunday’s Grand Prix after an engine change.

Red Bull’s Max Verstappen was also called to the stewards office after he was witnessed touching the rear wing on Hamilton’s Mercedes during Parc Ferme conditions after qualifying. The Dutchman was fined fifty thousand euros with no further action taken.

This promotes Verstappen to first for the Sprint, with Mercedes driver Valtteri Bottas in second. Red Bull’s Sergio Perez will line up third ahead of the Sprint later on Saturday.

Hamilton’s five-place grid penalty for the engine change will take place after the Sprint and will be applied for the Grand Prix grid on Sunday.