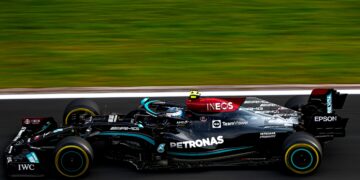 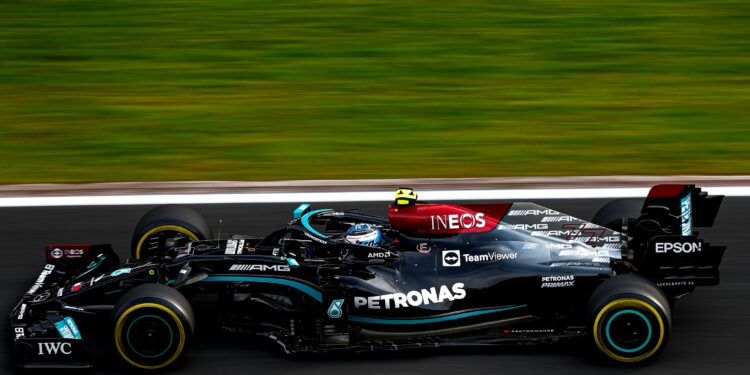 Hamilton set the fastest time of a 1:22.868, however pole will go to Bottas as the Briton will take a 10-place grid drop following an internal combustion engine change.

Championship contender Max Verstappen put his Red Bull in third place, but will be promoted up into second place, with Charles Leclerc for Ferrari in third.

Following the wet free practice three session, the teams were eager to get a lap on the board before the imminent arrival of further rain. Even before the green light went on to start the session, there were queues at the exit of the pitlane.

In Q1, several drivers struggled for grip on the damp surface with Verstappen spinning and Hamilton going off the track several times. The Mercedes and Red Bull drivers were able to get competitive laps in just as the rain started to fall.

AlphaTauri driver Yuki Tsunoda briefly brought out the yellow flags when he took a snap of oversteer at Turn 1, skimming across the grass and clattering an advertising board. The Japanese driver was able to continue with his car seemingly undamaged.

However the rain didn’t arrive in force and drivers were able to complete their qualifying times on soft slick tyres. There were two big shocks as McLaren’s Daniel Ricciardo was knocked out of Q1, with Mick Schumacher getting his Haas into Q2.

In Q2, the medium tyre was the choice as all drivers bar Tsunoda and Schumacher took the yellow walled compound. Red Bull’s Sergio Perez had a spin at Turn 1 on his hot lap; the car was ok, but his medium tyres took some heavy flat spots.

Charles Leclerc brought out the yellow flags with five minutes remaining as he spun his Ferrari just as he was starting his fast lap. Teammate Carlos Sainz, who will take a new engine for this Grand Prix, didn’t set a time.

As the sun came out for Q3, the top ten shootout began. First blood went to Bottas has Hamilton completed a Mercedes 1-2. Verstappen was just a quarter of a second behind on the first runs.

On the final runs, Hamilton set the fastest time, with Bottas in second. However, the Briton will receive his ten-place grid penalty promoting his teammate into pole position.

Sebastian Vettel put his Aston Martin into 11th place, ahead of Esteban Ocon in the Alpine. George Russell was unable to improve after running wide on his final run, putting his Williams in 13th place.

Schumacher set the 14th fastest time in his Haas, ahead of Sainz in the Ferrari. The Spaniard will start at the back of the grid following engine change penalties.

Ricciardo set the 16th fastest time, with Nicholas Latifi down in 17th for Williams. The two Alfa Romeo cars of Antonio Giovinazzi and Kimi Raikkonen came in 18th and 19th. With Nikita Mazepin at the back of the grid in his Haas