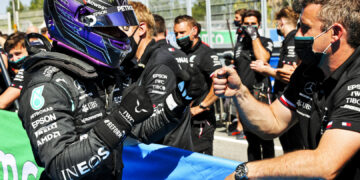 Hamilton: good gamble and great strategy by the team

Hamilton: good gamble and great strategy by the team 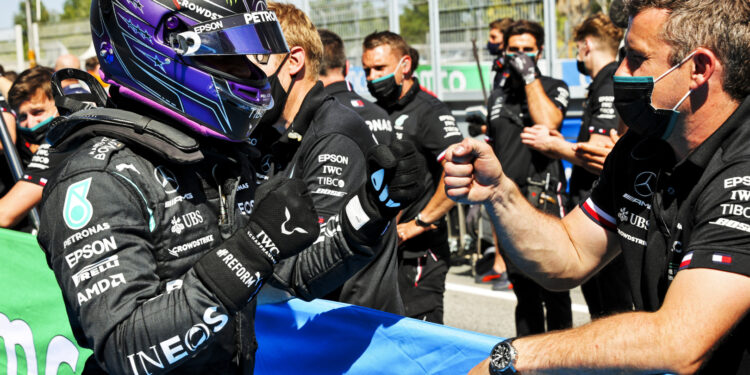 Although the Mercedes driver started the day on pole, the 100th time in his Formula 1 career however, Hamilton didn’t get to enjoy the clean air at the front of the pack for long as Max Verstappen got a better start and took the position at the first corner.

There was no change after the first round of pit stops but the Mercedes was right on the Red Bull’s tail and seemed primed to make a move when Hamilton ducked into the pitlane after quite a short stint. The reigning champion reemerged 23 seconds behind Verstappen and then steadily used his fresher tyres to reel leader in and make quick work of him once he caught up.

“Such a close start,” said Hamilton. “There was a lot of rubber down on the right hand side and the Red Bull got a great start, then after that just hunting. I was so close for so long and I didn’t think in doing that I’d be able to make the tyres last but I just managed to just keep them in somehow and it’s a long ways to come back from 20 odd seconds back but it was a good gamble, really great strategy by the team.”

Hamilton said that Mercedes had had an eye on the two-stop all weekend and actively saved the tyres for it. Although, as the second pit call came Hamilton was just ready to regain the lead on track and said that the opportunity did make him feel conflicted about following the strategy call, but his trust in the team and experience with the track won out over the short-term gain.

“It had been the plan all weekend for us to make sure we had two mediums to do a two stop. Even though a one stop potentially looks better I know from experience here that a one stop is very, very hard to pull off.

“I was about to have a shot at getting past him before I pitted right at the end and I was really conflicted, do I come in or do I ignore the call and stay out? Obviously I did what the team asked and naturally that’s because there’s a great trust between us. It’s a remarkable job by everyone here in this team through and through.”