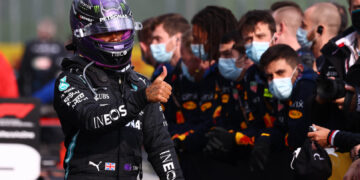 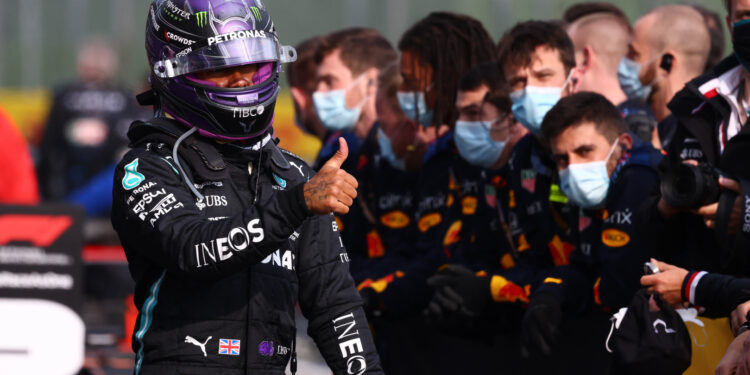 Emilia Romagna Grand Prix – Lewis Hamilton recovered to the podium despite hitting the wall and going a lap down half way through the race.

Starting from pole in tricky conditions, Hamilton didn’t get off the line as well as the Red Bulls behind him. The Brit went into the first chicane with Verstappen on the inside but there wasn’t space for the two of them and Hamilton went off track and had to bounce over the kerbs on the inside of the second part which secured the lead for Verstappen and caused some damage to the Mercedes’ front wing.

Coming up to the first pit stops, Hamilton had gotten up to pace and tried to overcut Verstappen, putting in a quick lap when the other pitted but that effort came to nothing when the Mercedes team had a slow stop and the top two continued in the same order.

As the two worked their way through traffic, Hamilton got on a wet patch as he was passing Russell and slid into the gravel. The Mercedes front wing, which had been slightly damaged on the first lap, got more damage as it came in contact with the barrier but after a long few seconds, Hamilton engaged reverse and managed to avoid beaching himself as he recovered back on track.

“There was only one dry line,” said Hamilton. “And I guess I was in a bit too much of a hurry to get by everyone. Coming to the inside I could see it was wet and I was trying to stop but the thing wouldn’t stop and sent me off. A bit unfortunate but I’m really, really grateful that we got to get going again and to get some points for the team was really important today.”

The British driver headed to the pits to pick up a new front wing and was a lap down in ninth when the red flag was brought out for the clash between Bottas and Russell. That meant luck was on Hamilton’s side as he was able to recover the lap before the race restarted and then it was up to him to recover as best he could by hunting down and passing the drivers in front.

When asked what he was thinking about during the red flag pause, Hamilton said he spent the time getting over his uncharacteristic error and refocusing on the job that was still left to do.

“I was trying to get over the gutting kind of feeling it is when you make a mistake and just moving on from it, and just learning from it really quick. You don’t have time to dwell on it so that’s what I did, get back into racing spirit. I didn’t know whether or not we’d be able to overtake because, again, offline was going to be wet but still had some really good fun battles with all the guys.”

After sending Lando Norris an encouraging message following the younger driver’s error lost him a career best qualifying position yesterday, Hamilton had a close fought battle with Norris for 2nd place. Post-race, Hamilton congratulated both his fellow podium finishers and was pleased to see his old team on the podium again.

“Firstly congratulations to Max, he did a fantastic job today, just solid work from him and also to Lando, what an awesome job and so great to see McLaren back up there. On my side it was not the greatest of days, first time I’ve made a mistake in a long time but I’m grateful I was able to bring the car home still.”