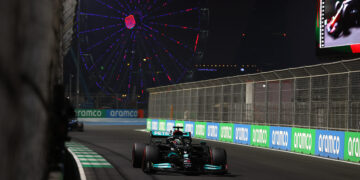 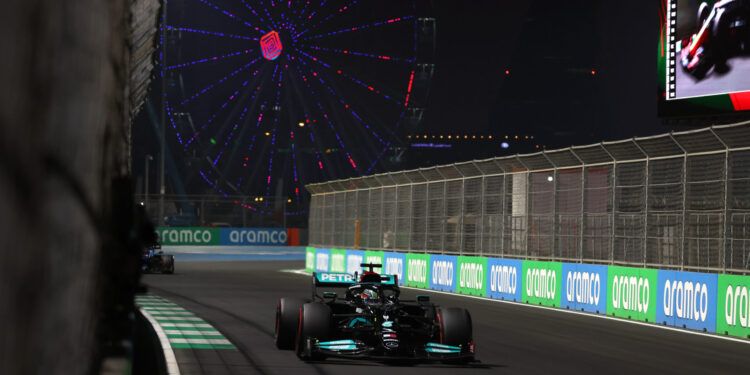 Saudi Arabian Grand Prix – Mercedes’ Lewis Hamilton will start on pole for the inaugural Saudi Arabia GP ahead of his teammate Valtteri Bottas .

Hamilton set a time of 1:27.511 which was a tenth faster than Bottas, but it was drama for Red Bull’s Max Verstappen who looked on course for pole, but slammed into the wall on his last run.

After the drivers’ first runs, it was Verstappen who was fastest with a 1:28.136. Championship contender Hamilton was unable to set a time after going off on his first attempt.

Perez was the man up in second place setting a provisional one-two for the Red Bull squad. A quick Lando Norris for McLaren was in third place, with Bottas the best Mercedes in fifth.

However, Hamilton got his head down and set a faster lap on his second run with a 1:28.466 going two tenths faster than Verstappen. McLaren looked quick and went up into third and fourth. But it was Ferrari who lit up the timing sheets with Carlos Sainz going fastest with a 1:28.330, a tenth and a half faster than Hamilton.

On the second runs, Verstappen popped up into first place with a time that was just half a second faster than Sainz in second. But it was Bottas moments later who stole the show with a 1:28.057 to go two tenth clear up top.

The pendulum swung towards Red bull as Perez got himself up into first place. Bottas looked to be going quicker, but narrowly missed out on pole by going just 0.036s slower than Perez’s time.

Verstappen had to abandon a run after a collection of cars were queued in the final corner. The Dutchman peeled into the pits albeit down in fifith. Bottas complained of engine misfiring on his engine and came into the pits, but came to a halt in the pitlane.

The drivers knocked out in Q1 were:

After his issues in the previous session, Bottas was able to get out in Q2, much to the relief of his Mercedes team.

The mediums were the compound of choice as drivers elected to start the race on a harder tyre.

On the first runs, Verstappen crossed the line to set a 1:27.953 to go first, nearly seven tenths faster than Leclerc in second place. The Dutchman was nearly a second clear of his teammate Perez in third place.

The yellow flags were brought out for a dramatic spin for Sainz who narrowly missed the wall at the end of the first sector. There was some slight rear wing damage to the Spaniard’s Ferrari, and Sainz returned to the pits for further checks.

On the second runs, Perez went just 0.007s faster than his teammate to go top of the timesheets. Hamilton got himself into third place, a tenth down on the Red Bulls. Bottas hung on a further tenth behind in fourth place.

The AlphaTauri pair of Yuki Tsunoda and Pierre Gasly were best of the rest in fifth and sixth respectively. Norris, who felt he was held up by Perez, set the seventh fastest time ahead of Leclerc.

After his spin, Sainz set about improving his position after his car was repaired. However, further up, Hamilton improved his time to go fastest with a 1:27.712 to go two tenths clear than Perez.

Sainz had another wild moment and lost the back end of the car, but was able to save it to continue with his lap. Unfortunately, the Ferrari driver was unable to improve.

The drivers knocked out at the end of Q2 were:

Bottas set the pace on the first timed laps with a 1:28.143, but all eyes was on his teammate Hamilton who lost the rear in sector one and had to take to the runoff. Tsunoda was second, with Leclerc up in third place, three tenths off Bottas.

Hamilton’s second attempt was good enough for provisional pole having set a 1:28.035 to got a tenth clear than his teammate.

However, it was Verstappen who was lighting up the timing screens who set a blistering laptime to steal provisional pole from Hamilton by nearly four tenths of a second.

Bottas managed to pip his teammate on his second run and went 0.061s faster than his teammate. But the Finn was unable to match the pace of Verstappen. Perez was in fourth ahead of Norris, Tsunoda, Leclec, Ocon, and Giovinazzi.

On the final runs, Hamilton managed to pull something out of the bag to get into provisional pole, a tenth and a half clear of Verstappen.

However, Verstappen’s fightback began with a fastest first sector time, a fastest second sector time, and slammed into the wall in the final sector to lose the chance or pole.

Bottas finished in second to claim a Mercedes one-two, Verstappen set the third fastest time but it isn’t known whether he will need any repairs.

Leclerc will start in fourth place ahead of Perez, Gasly, Norris, Tsunoda, Ocon, and Giovinazzi.