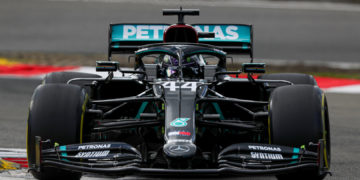 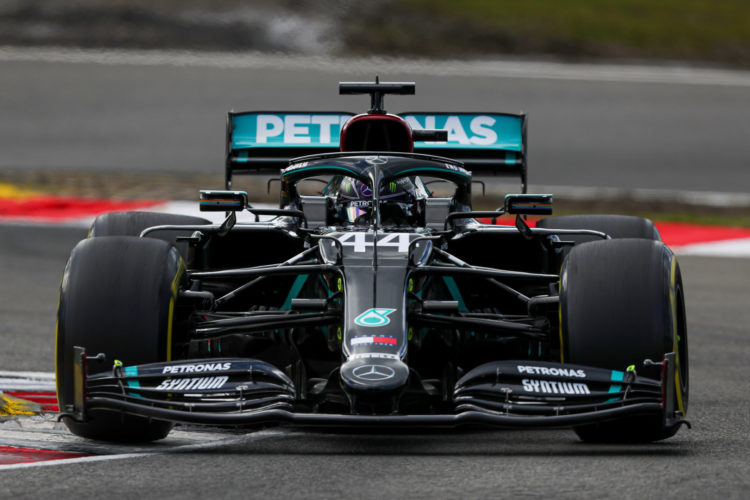 Eifel Grand Prix – Lewis Hamilton has held off a strong challenge from Max Verstappen to win at the Nurburgring, as teammate Valtteri Bottas retired.

Click here for the complete results from the 2020 Eifel Grand Prix.

Lewis Hamilton has made history by matching Michael Schumacher’s outright F1 race record of 91 victories, after taking victory at the Nurburgring.

Having started on the front row, Hamilton made a good start to draw level with pole sitter Valtteri Bottas into Turn 1, with the Finn resisting the challenge into Turn 2 and hold onto his lead. Bottas set about extending his lead to 1.5 seconds and all looked good for the Finn until he locked up into Turn 1. This allowed Hamilton to catch him and pass him around the outside of Turn 2 to take the lead.

With Bottas forced to pit as a result of his lock-up, he fell down to P4 behind Hamilton, Verstappen and Renault’s Daniel Ricciardo. Quickly despatching Ricciardo to reclaim P3, the Virtual Safety Car was deployed to cover the recovery of George Russell’s Williams after he was taken out of the race by Alfa’s Kimi Raikkonen. With Hamilton and Verstappen pitting under the VSC, Bottas fell to ten seconds behind the leading pair, but his race quickly soured further as he encountered a power unit issue. Initially, he just started falling down the order, but he was eventually forced to pit and retire as the issue intensified.

Hamilton was able to cover Verstappen and opened up a lead of six seconds, with this lead closing down again as the VSC was deployed again towards the end to cover the recovery of Lando Norris’ stricken McLaren. The British driver had a power unit issue that also just got worse and worse, with McLaren saying a sensor issue was to blame. He had been running in P3 when the problem first struck.

With Ricciardo having pitted relatively early to take on the Hards, his struggle to reach the end comfortably was helped by the late VSC. This allowed him to pit, as did the chasing Sergio Perez. When the race resumed, Ricciardo’s initial pace was such that he challenged Verstappen for P2 but was able to settle into a comfortable P3 with Perez settling for P4.

With Lando Norris gone, it was left to Carlos Sainz to lead the McLaren challenge and he finished in P5 ahead of Pierre Gasly’s Alpha Tauri. Charles Leclerc finished P7 after a strong race for Ferrari, having looked fighty in P4 in the opening stint. Nico Hulkenberg, on super-sub duty as he stood in for Lance Stroll, came home in P8 after starting from P20. Romain Grosjean finished P9 for Haas, with Antonio Giovinazzi taking a point for Alfa Romeo by taking P10.