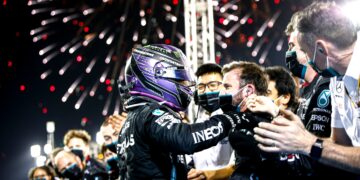 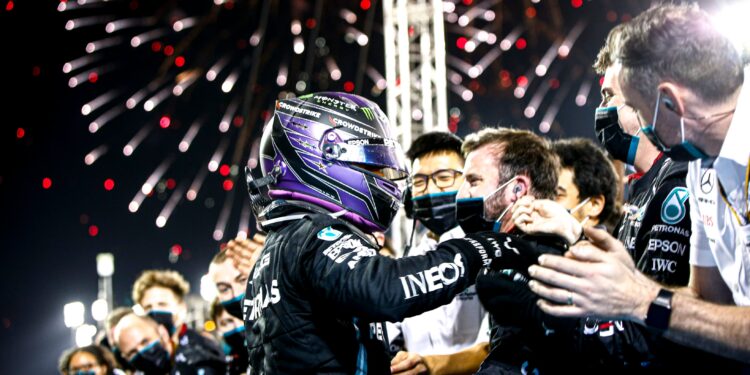 Verstappen, who had complained of problems with his differential, was undeterred and managed to get past the seven-time World Champion late in the race. However, the Dutchman ran wide at turn four and yielded the position back to the Briton.

The duo had swapped positions several times as their different pitstop strategies played out, but it all came down to a final push from Verstappen who piled the pressure on Hamilton on his older tyres. With a move around the outside of the Hamilton at turn four, Verstappen exceeded track limits and was advised by the team to yield the position back. However the Dutchman was unable to get close to make a move for remaining tense laps.

Valtteri Bottas had a low-key afternoon who was passed by Ferrari’s Charles Leclerc at the start. The Finn suffered a slow pitstop on lap 32. Bottas whose strategy played out differently to his Mercedes teammate, pitted on the penultimate lap of the race to bag the fastest lap and finish in third place.

It was a chaotic start which saw Red Bull’s Sergio Perez stop out on track on the formation lap causing an aborted start. The Mexican, who was awarded Drive of the Day, seemingly losing complete power and managed to get his car going again – he ended up starting the race from the pitlane.

Once the race got going again the Safety Car was called out deal with an accident for Haas’ Nikita Mazepin who spun at turn three and punted into the barriers. The Russian lamented the accident and took full blame citing his cold tyres as the cause.

After the restart, the Virtual Safety Car was called out to deal with a strikingly similar accident with Haas teammate Mick Schumacher who also spun on the outside kerbs at turn three. Schumacher was able to carry on and finish the race.

Alpha Tauri’s Pierre Gasly was also caught up on the lap four incidents and needed to pit for front wing repairs after clipping Daniel Ricciardo’s McLaren at turn four.

McLaren’s Lando Norris had a solid race starting in seventh and finishing in fourth place ahead of a recovering Perez. His teammate Ricciardo finished in seventh for a double points finish for the Woking squad.

Charles Leclerc finished in sixth for Ferrari after a quiet afternoon, with his teammate getting more involved in the action and finishing in eighth.

Rookie Yuki Tsunoda became the first Japanese driver to score points since 2012 and finished in an impressive ninth. Whilst Aston Martin’s Lance Stroll rounded out the points paying positions in tenth.

The Alfa Romeo pair of Kimi Raikkonen and Antonio Giovinazzi finished in 11th and 12th respectively.

Esteban Ocon, who was the sole finishing Alpine, finished in 13th and had his race was compromised by a collision with Sebastian Vettel. The four-time World Champion simply drove into the back of the Frenchman under braking. Both recovered but Vettel needed to pit for front wing repairs.

George Russell, who was running as high as tenth at one point, got his Williams into 14th place ahead of Vettel in 15th. Schumacher finished at the back of the back.

There were four retirees – Nicolas Latifi and Pierre Gasly pulled into the pits late on in the race whilst Alonso retired his Alpine on lap 34 with debris in his brake ducts. Mazepin was the fourth retirement.