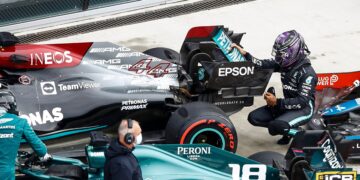 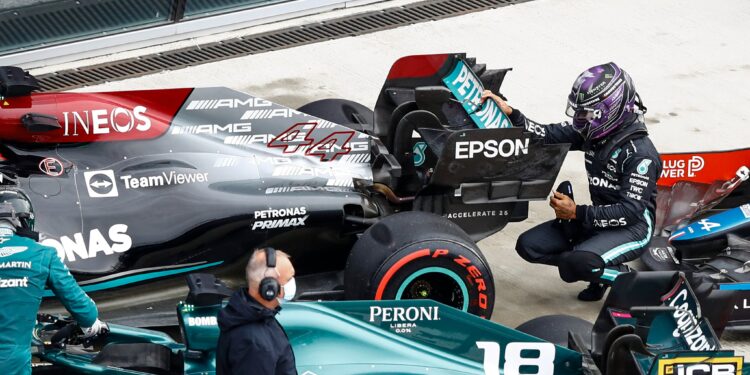 Russian Grand Prix – Lewis Hamilton held his hands up, taking full responsibility for his qualifying error and apologised to his Mercedes team.

With yesterday’s announcement that the main rival to Hamilton’s championship defence, Max Verstappen, would be starting from the back of the grid after changing his power unit all the Mercedes driver needed was a smooth weekend. That would allow him to score the maximum points, make up the five he currently trails the Dutchman by and retake the championship lead.

All was proceeding as planned with Hamilton only slower than his teammate during the Friday practices, and then going fastest in Q1, Q2 and the initial Q3 runs. Halfway through that final session however is where things fell apart. Heading into the pits to swap from intermediate to soft tyres the British driver hit the wall on entry and broke his front wing.

“I made a mistake in the pit lane,” Hamilton said. “And I’m incredibly disappointed with that. Up until then, I was in the groove, I was in the zone and I am really sorry for all the team that are here and back at the factory because obviously that’s not what you expect from a champion. It is what it is, and I’ll do my best tomorrow to try and rectify it.

“It was right on the cusp of timing of coming in so I was really trying to rush to get in and out as quick as possible. 100% my fault. I’m really sorry to the team. Ultimately really disappointed with myself as up until then I was clean every lap, no problem. But then, yeah, silly one but you live and you learn.”

That meant that Hamilton had to wait while the team retrieved a new wing and then lost more time when, before attaching it, they moved him out of the way to change Valtteri Bottas’ tyres. While this was happening, Hamilton’s newly attached soft tyres were cooling down and made it even harder for the seven-time world champion in his attempt to get them into working range and ready to set a quick time.

The pain didn’t stop there as on his sole flying lap on the slick tyres Hamilton spun, ended up rear-ending the barriers and finishing qualifying in P4 with the time set on the intermediates at the start of Q3.

It was a messy end to Q3 for @LewisHamilton

A tangle with the pit wall led to a race against time for his second flying lap, which ended with a bit of a spin 👀#RussianGP #F1 pic.twitter.com/PaSUmxHDNs

“At the end, it was so slippery when you don’t have any temperature and without the time for that second push lap, we couldn’t set the time of the guys ahead. There’s nothing I can do about the past now, I just hope the car can be fixed for tomorrow and I’ll give it everything I’ve got.”

Hamilton said he’d spend the night coming to terms with his mistake and try to turn it into a positive for tomorrow’s race. He also made time to congratulate first-time polesitter, Lando Norris.

“Those cars up front have got good pace and it definitely won’t be easy tomorrow. I’m just going to say my prayers and hope that our car can be fixed to be OK for tomorrow. These things are sent to try us, and as much as I feel terrible right now, I’ll turn it into a positive and try to do the best we can. But we’ve got a Brit on pole which is great, so congrats to Lando.”