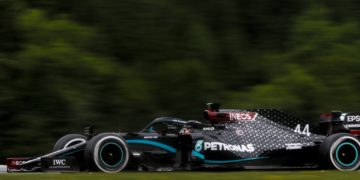 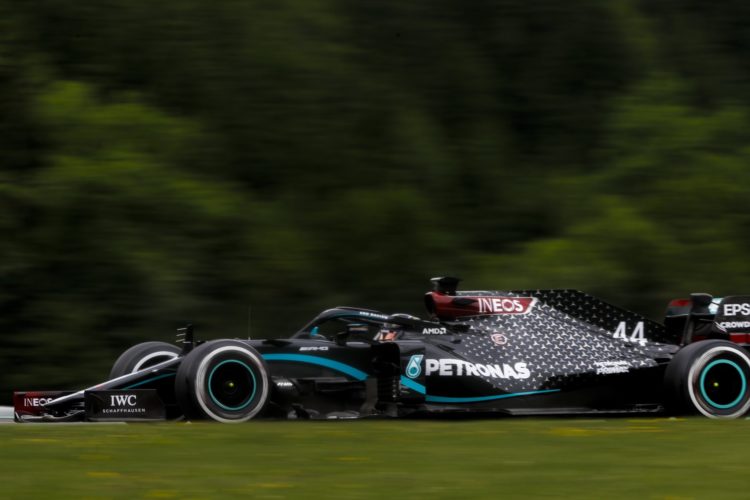 Lewis Hamilton has led a Mercedes 1-2 in first practice at the Red Bull Ring. The Mercedes driver set a 1:04.816 on the Soft tyres to go fastest, more than quarter of a second ahead of teammate Valtteri Bottas.

After a damp start to the session, the final hour of FP1 saw the times slowly ramp up as the drivers shook off almost eight months of rustiness. But there was no surprises at the top of the times as the new, black Mercedes W11 went fastest.

Max Verstappen was the closest competitor to the two Merc drivers, albeit 0.602 from the front. The Red Bull driver spun at the first corner during his first Soft tyre run, but recovered to set his eventual fastest time.

Carlos Sainz finished P4 for McLaren, having been consistently near the front throughout the practice session. He used the Soft tyres as well, and was 0.013 slower than Max Verstappen. Sergio Perez led a strong session for Racing Point, and he finished in P5. He was 0.696 from the front time set by Hamilton.

Alex Albon was P7 for Red Bull Racing, while Daniel Ricciardo finished P8 for Renault. Kevin Magnussen was P9 for Haas, while Charles Leclerc was the fastest Ferrari after a subdued session from the Scuderia. Neither Ferrari used the Soft tyre for their fastest times, but Leclerc’s quickest time was 1.108 from the front – Pirelli say the tyre delta difference between the Soft and Medium compounds is 0.3/0.4 seconds.

Lance Stroll finished P11 in the second Racing Point, ahead of Sebastian Vettel’s Ferrari. Esteban Ocon was P13 in his first session back in Formula 1 since 2018, but the Renault driver withdrew early from the session after some bodywork broke away from his car going down the pit straight. Antonio Giovinazzi was best of the Alfa Romeos as he finished P14 ahead of Kimi Raikkonen.

Pierre Gasly finished practice in P16 for Alpha Tauri, with George Russell and Nicholas Latifi in P17 and P18 respectively. Daniil Kvyat was P19 in the second Alpha Tauri.

Romain Grosjean was bottom of the timesheets, having only managed a handful of laps. The Haas driver had a brake fluid leak early in the session, that resulted in him staying in the pits until the closing seconds of practice.