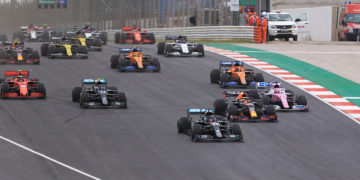 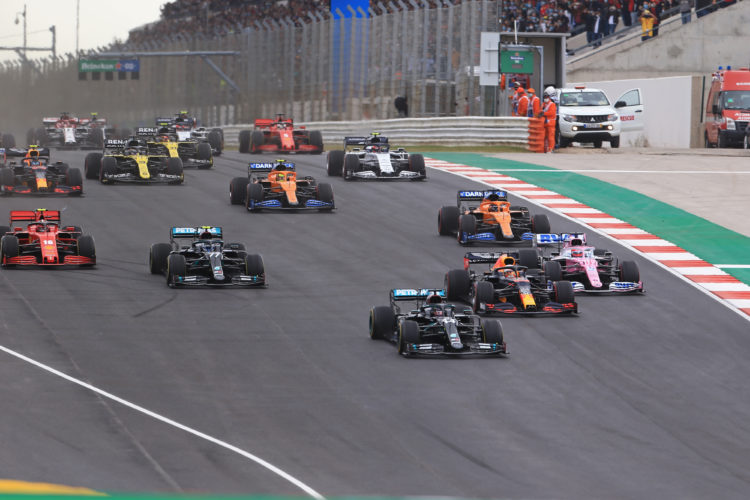 Click here for the complete results from the 2020 Portuguese Grand Prix.

Lewis Hamilton has claimed victory at Portimao, taking his 92nd career victory. This win places him ahead of Michael Schumacher’s all time record, which Hamilton equalled last time out at the Nurburgring.

Sainz initially pulled away from Bottas and Hamilton, while Max Verstappen struggled for pace initially and collided with Racing Point’s Sergio Perez. While the Mexican was spun around and forced to pit, Verstappen was able to continue without any damage.

However, the Medium-shod cars began to come to life as they got temperatures into their tyres, and Bottas was able to hunt down and pass Carlos Sainz, with Hamilton following suit. Bottas appeared to be enjoying the Mediums a little more than Hamilton in the early stages, opening up a gap of 2.5 over Hamilton.

However, Hamilton seemed to be biding his time and caught back up on Bottas to swoop past his teammate into Turn 1 and claim the lead.

From there, Hamilton was untouchable. He extended out his first stint and got quicker and quicker on his Medium tyres, before Mercedes pitted him on Lap 40 for the Hard compound. Bottas followed suit a lap later and, despite requesting the Softs, was put on the Hards. Hamilton cantered home with a 25 second lead over Bottas at the chequered flag.

Max Verstappen claimed P3 for Red Bull Racing, having briefly looked like he might come under pressure from Charles Leclerc’s Ferrari for the position. Leclerc enjoyed much fresher tyres for the second stint, but wasn’t able to close up enough by the end to put the Dutch driver under pressure, but the Ferrari driver still claimed a strong P4.

Pierre Gasly took P5 for Alpha Tauri, claiming the position as he overtook Sergio Perez’ Racing Point towards the end. Carlos Sainz, who had such a strong start to the race on the Soft compound, wound up coming home P6 as he followed Gasly through past Perez, while the Racing Point driver was resigned to P7. Having run a very long stint on the Mediums, he didn’t enjoy the Softs to the end, and lost out to Gasly and Sainz as a result.

Esteban Ocon finished P8 for Renault, having had a cracking battle with Perez, and finished ahead of Daniel Ricciardo after starting behind his teammate on the grid. The final point went to Ferrari’s Sebastian Vettel, with the German one of the few drivers to start on the Medium compound.