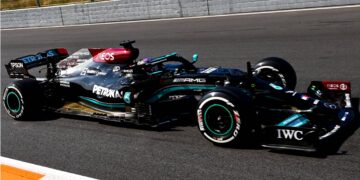 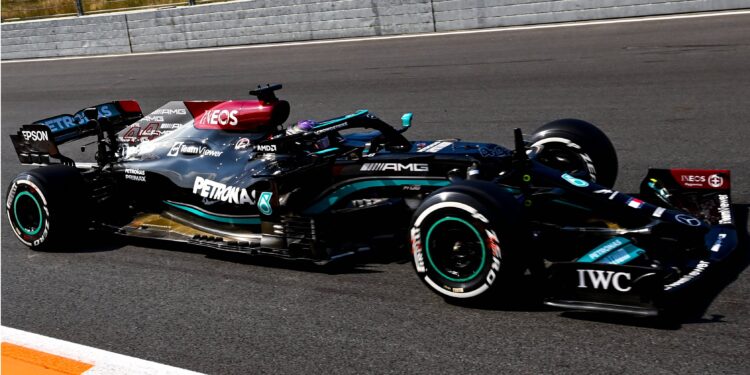 Dutch Grand Prix – Lewis Hamilton was fastest ahead of home hero Verstappen in a shortened session with less than 30 minutes of running.

After a washout last weekend, all drivers were quick to head out into the Dutch sunshine for their first taste of the Zandvoort track. It was only a couple of minutes before the first yellow flag of the session appeared, when Yuki Tsunoda, with an aero rig on the front of his AlphaTauri, spun at T10 but was able to continue without incident.

There were a few other moments with Esteban Ocon locking up and having to take his Alpine into the runoff while, in the other AlphaTauri, Pierre Gasly ran wide and lost his left mirror as a result.

Times fell quickly at the start of the session going from 1:14s down to a best of 1:12.679, by Lando Norris, by the time the red flag was flown after eighteen minutes. That session stoppage was caused by Sebastian Vettel who pulled his smoking Aston Martin in at the pit exit. The German had radioed in that he had MGU-K issues and had just returned to the track after pitting to deal with the issue.

Vettel played fireman for his own car and there seemed to be some confusion between himself and the marshalls as the Aston Martin driver wanted a specific type of extinguisher but there didn’t seem to be one available. For a car stopped at the pit exit, it caused a lengthy stop to the opening practice as the car must have been live and dangerous to touch as it took nearly twenty minutes before mechanics with rubber mats and gloves arrived to check the current levels.

The car was then able to be removed from the track and the session was back to green with just six minutes left on the clock. It was a slow drip of cars returning to the track however, despite all the drivers lining up at the pit exit, they were giving themselves a gap to the car in front. Given the track is so short though, all it ended up with was having the early cars, up to speed but having to slalom through the others who were just getting up to speed.

It was a manic final few minutes and even had Gasly going side-by-side with Valtteri Bottas and then with Mick Schumacher as they raced to get to the line before the chequered flag. There was also a close moment between Ocon and Norris when the faster McLaren driver tried to pass but got pushed off track when the Alpine closed the door. Needless to say Norris was unimpressed and the commentators would be unsurprised if the stewards decided to have a look at the incident.

Bottas was P5 in the second Mercedes with a 1:11.738 and it was another four tenths back to the Alpines with Fernando Alonso in P6 ahead of Ocon. Antonio Giovinazzi was P8 for Alfa Romeo 0.859 seconds slower than Hamilton’s time while the sole remaining Aston Martin, with Lance Stroll, was P9.

The top ten was rounded out by Gasly with a 1:12.515 while his teammate, Tsunoda, didn’t get to set a time after the team found an issue on his car.