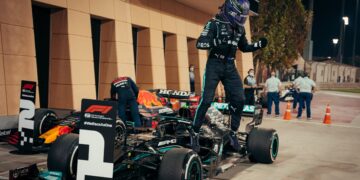 Hamilton: “one of the hardest races” but “I love the challenge”

Hamilton: “one of the hardest races” but “I love the challenge” 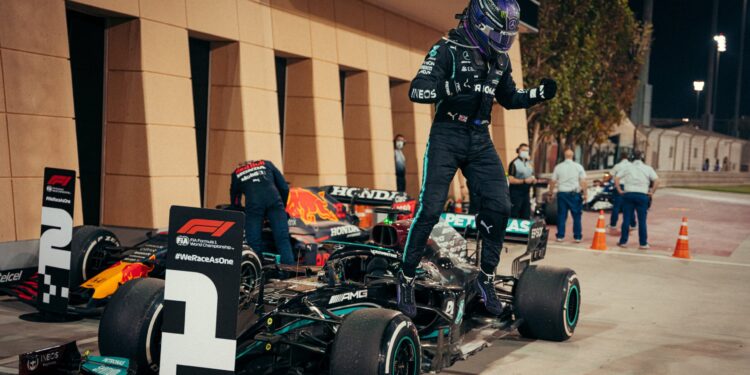 Bahrain Grand Prix – Lewis Hamilton took the first win of the season after a close fought battle between himself and Max Verstappen.

The battle for the lead fought between strategists and in the pit lane for the majority of the race but after Verstappen made his final stop he reeled Hamilton in the two put on a tense show for the final laps of the grand prix.

“Stopping early we knew was going to be difficult,” said Hamilton. “But we had to cover Max, they’ve had amazing performance all weekend so it was going to take something pretty special.

“We stopped for that last stint and trying to find the right balance between not pushing too much and having tyres at the end of the race was difficult. Max was all over me right at the end, so just about managed to hold him off. It was one of the hardest races I’ve had for a while so I’m really grateful for it.”

Mercedes look like they will have to fight this year if they want to hold onto their championship titles as Red Bull seem to have the pace on them but, Hamilton says the team is up for the challenge and will relish it.

“Each year they’re talking about when you’ve hit your peak and, I think timing is everything, I think I’m kind of probably at that. Max is really doing well at the moment too so it’s going to take everything and more for us to put in performances like this, but we love the challenge, I love the challenge, still love what I do.”

Hamilton praised the spirit and work his team had put in since pre-season testing to close the gap to Red Bull.

“Massively thankful to the men and women back at the factory, and the guys here also, for continuously pushing the boundaries and never giving up even if we do feel we’re behind.

“This is a really good start for us. Through testing we thought we were going to be six, eight tenths behind so the work that’s gone on the last week has been spectacular. I’m just so proud to see everyone so hyped for today as well.”