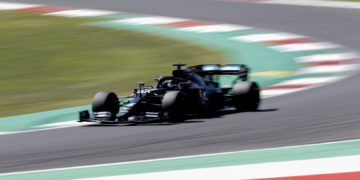 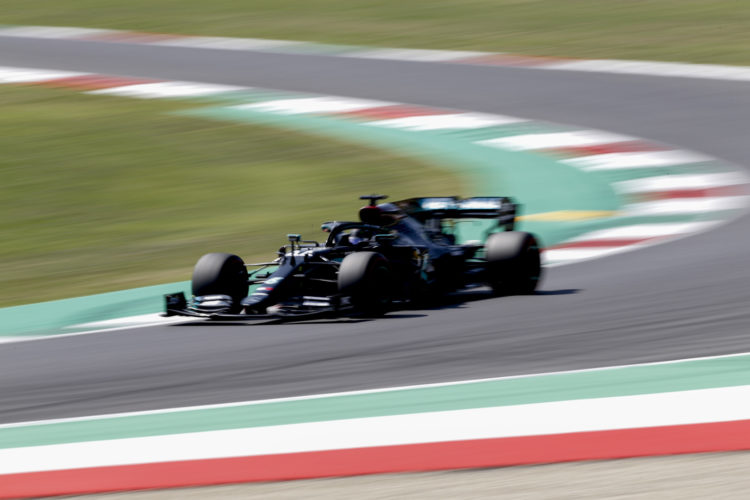 Having admitted to having some trouble to adjusting to the Mugello circuit on Friday, which is hosting an F1 race for the first time this weekend, Lewis Hamilton rose to the occasion to take pole position for the inaugural Tuscan Grand Prix, after setting a new lap record of 1:15.144 at Mugello. This was set on his first run in Q3, and put him 0.059 clear of Valtteri Bottas.

There were no improvements on the second runs, although any opportunity of drivers doing so was hampered by a late yellow flag as Renault’s Esteban Ocon went off the circuit and into the gravel at Turn 2.

Max Verstappen was able to take P3 for Red Bull Racing as the team resumed their usual position of the closest challengers to Mercedes after a subdued weekend at Monza last time out. Encouragingly for Red Bull, Alex Albon was able to keep up with his teammate and claim P4 to make it an all Red Bull second row.

Charles Leclerc put in a stunning lap in his Ferrari to place his SF1000 in P5 at the team’s 1000th Grand Prix, offering some hope of some competitiveness in an otherwise miserable season. Sergio Perez finished P6 for Racing Point, an impressive feat to out-qualify teammate Lance Stroll as the Canadian is running an updated version of the RP20 this weekend. There was less than half a tenth between the pair. Perez, however, will start from P8, due to picking up a grid penalty for a practice clash on Friday.

Daniel Ricciardo finished P8 for Renault, ahead of Carlos Sainz in the McLaren. Ocon finished in P10 and didn’t set a time as a result of his off in the closing stages of the session.

Lando Norris will start from P11, and the first driver with free choice of tyre for the race start, having just missed out on Q3 for the first time this year. Daniil Kvyat will line up in P12, having made an error through Turn 7 on his final run in Q2. He was the highest placed Alpha Tauri driver after last weekend’s race winner Pierre Gasly was knocked out in the first part of qualifying.

Kimi Raikkonen was P13 for Alfa Romeo, just ahead of Ferrari’s Sebastian Vettel. The 4 time World Champion could only beat Romain Grosjean’s Haas in Q2, with the French driver in P15.

Behind Gasly in P16 is Antonio Giovinazzi for Alfa in P17, with George Russell in P18 for Williams. Nicholas Latifi was P19 in the second Williams, with Kevin Magnussen bringing up the rear for Haas.