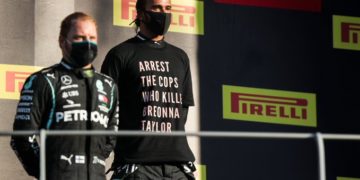 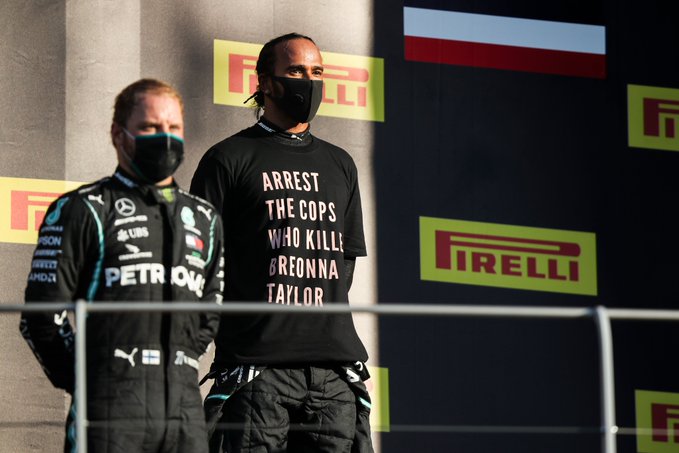 Lewis Hamilton wore a t-shirt with a different message for the anti-racism moment of recognition ahead of the race at Mugello. Now part of the pre-race ritual for F1 races in 2020, Hamilton’s message up until now has been ‘End Racism’ and ‘Black Lives Matter’. All twenty drivers have publicly shown their support for the ‘End Racism’ message, and attend the pre-race ceremony. Mercedes have also weighed in behind their Champion driver, sharing his message on social media.

For the Tuscan Grand Prix, Hamilton opted to push a different message. Emblazoned on his t-shirt was the message ‘Arrest the cops who killed Breonna Taylor’. This is in reference to a shooting incident six months ago in the United States, in which three plainclothes Louisville Metro Police Department officers carried out a no-knock search warrant on the home of Taylor. The 26 year old emergency medical technician was killed during the operation, following shots being fired by the police officers in response to Taylor’s boyfriend firing on them, believing them to be intruders. Taylor was shot eight times in the raid.

The officers who carried out the raid have not been arrested – instead, they were placed on administrative re-assignment and are being internally investigated. However, protests around the world have continued to try to highlight the situation, particularly with the escalation of protests following the killing of George Floyd in May.

Hamilton took the opportunity to say ‘justice for Breonna Taylor’ at the end of his initial interview after winning the Tuscan Grand Prix.

Later, he was asked whether he had changed his message of anti-racism, but the reigning Champion said he was doing it to highlight the situation and he wanted to raise awareness around the world.

“Not much of a change, it’s still fighting the same thing.” said Hamilton. “It’s just… it took me a long time to get that shirt and I’ve been wanting to wear that and bring awareness to the fact that there’s people that have been killed on the street and there’s someone that got killed in her own house, and they’re in the wrong house, and those guys are still walking free and we can’t rest, we can’t… we have to continue to raise awareness with it

Hamilton praised Naomi Osaka at the U.S. Open, as she wore seven different masks with seven different names on them in order to highlight the racial injustice against black people in the United States, saying that she was using her voice and prominent position in an inspirational way: “Naomi has been doing amazing, so huge congratulations to her, and I think she’s an incredible inspiration with what she’s done with her platform. I think we just have to continue to push on the issue.

It’s been 6 months since Breonna Taylor was murdered by policemen, in her own home. Still no justice has been served. We won’t stay silent. #JusticeForBreonnaTaylor pic.twitter.com/7zinVHiYcH