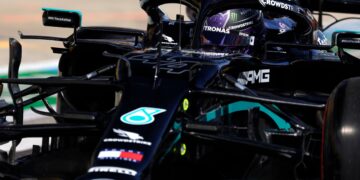 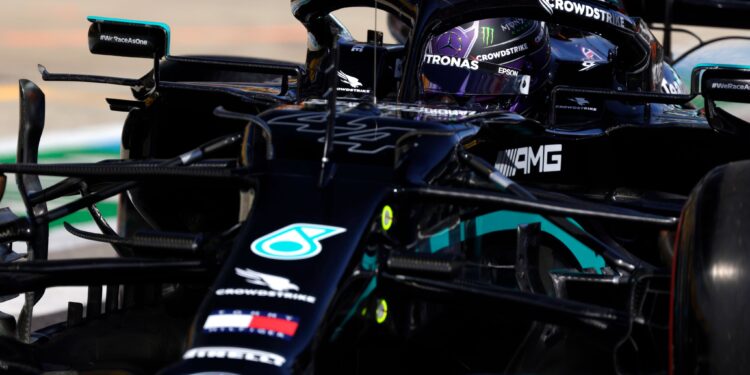 Red Bull’s Max Verstappen came through from the back of the grid to finish in second place, with Ferrari’s Carlos Sainz in third.

It was heartbreak for McLaren as Norris took a gamble to stay on on a wet track. Unfortunately, the rain was just too heavy and the Briton was just too slow and had to eventually pit for wet tyres.

At the start, Norris got off the line well, but on the long 800m straight Sainz took full advantage of the slipstream and made a move on the McLaren into Turn 1. Championship contender Hamilton lost out at the start and dropped down to 6th, behind a fast starting Aston Martin of Lance Stroll and McLaren’s Daniel Ricciardo.

Championship leader Max Verstappen managed to get his Red Bull up to 16th but crucially still behind Valtteri Bottas’s Mercedes who took an engine penalty before the race and started in 17th.

Once the race start settled down, Sainz was two seconds ahead of Norris by Lap 6. Further back, Russell was still in third and holding a train of cars at bay, including the Aston Martin of Lance Stroll, Ricciardo, Hamiton, and Sergio Perez.

On Lap 6, Vertsappen made a move on Bottas and it looked rather easy for the Dutchman who moved into 14th place. Released into clear air, the Red Bull driver started to set fast sector times to eat into Hamilton’s lead up the road of nine seconds. Luckily for Verstappen, the next car up the road was the sister team of AlphaTauri and the Dutchman passed Pierre Gasly on Lap 9.

Sensing a switch to the two stop, Norris started to pick up the pace and got within DRS range of race leader Sainz. As Ferrari’s Charles Leclerc tried a move on Sebastian Vettel’s Aston Martin, a quick Verstappen close behind tried a move on both of them on Lap 10, but had to back out fearing a clash. There was no damage to the Dutchman’s front wing as Leclerc lost out to both cars and dropped to 13th.

Stroll was the first of the front runners to blink and came into the pits on Lap 13 who came out just behind Bottas in 15th. On Lap 13, Norris went on another push lap and took the lead of the race at Turn 15 under the slipstream of Sainz’s Ferrari.

By Lap 16, Verstappen managed to get himself up into sixth place, being able to run longer on the harder tyres. The Dutch driver continually set fastest laps and was a second a lap faster than the cars ahead – crucially eating into Hamilton’s lead ahead down to six seconds.

On Lap 21 Hamilton came on over the radio to urge his team to prepare a for a pitstop in order to undercut Verstappen. Ricciardo came into the pits on Lap 22, however a disastrous pitstop for the McLaren team meant that the Australian rejoined behind Alpine’s Esteban Ocon in 13th. Ricciardo, on fresher rubber, immediately overtook the French driver and started to chase after Russell ahead.

Meanwhile, in clear air, Hamilton started to set quick laptimes and set the fastest lap of the race on Lap 25, which was immediately bested by Ricciardo. The gap between Hamilton and Verstappen had held at around five seconds as the teams tried to vie for a clean space to pit their drivers.

On Lap 26 Hamilton and Verstappen came into the pits for their stops, the Mercedes on hard tyres with the Red Bull on mediums. Hamilton rejoined in ninth, ahead of Ricciardo, Verstappen joined behind Russell in 12th.

Race leader Norris came into the pits on Lap 28 – a more slick stop for the Briton ensured that the McLaren came out in fourth ahead of Gasly, Sainz, and Hamilton.

Sensing a race win, Hamilton put his foot down to chase down net first place Norris. By Lap 31, the Briton had made moves on Sainz and Gasly to move up to fifth place. Verstappen was back in 10th and made a move on Stroll for ninth.

On Lap 33, Haas needed to retire Mick Schumacher due to a ‘decaying’ issue with the US based squad unable to resolve the issue with his car.

On Lap 34, Norris made a move around the outside of Turn 3 on Leclerc to move into third place. Meanwhile Gasly came into the pits for fresh tyres and rejoined down in 16th. A lap later, Hamilton managed to make his way past Leclerc to move up into fourth place, this prompted Ferrari to pit the Frenchman for new hard tyres joining him just ahead of Bottas in 14th.

Red Bull pit Perez on Lap 36 with Fernando Alonso coming in for Alpine promoting Norris back to the lead – however less than three seconds separated Hamilton and the McLaren.

A slow stop for Perez ensured that both Sainz and Ricciardo were able to jump ahead of the Mexican. He joined just ahead of Verstappen. Alonso managed to get in front of Verstappen on Lap 38, nudging the Dutchman down into seventh place.

With 10 laps to go, the duel between Norris and Hamilton saw the gap between the two down to just 1.2 seconds. Rain threatened to arrive in the final few laps and there were reports of a few spots arriving on Lap 45.

On Lap 45, Perez managed to make a move on Ricciardo, pushing the Australian down in fifth, meanwhile Leclerc made a move on Stroll for eighth.

The rain arrived on Lap 46 with the crowd reaching for the ponchos and umbrellas. On Lap 48 Perez managed to get past Sainz for the last podium.

A dramatic conclusion the rain started to arrive with a number of drivers deciding to pit for intermediates. However, Norris decided not to pit but Hamilton swapped his hards for intermediate tyres. In the drama, Alonso got up into third place.

The rain came down heavily with just three laps to go and it was disaster for Norris who spun on the wet track. The Briton eventually came into the pits but had to tiptoe around the circuit. When he did come into the pits he rejoined behind Raikkonen in eighth.

Ricciardo finished in fourth place ahead of Bottas in fifth. Alonso finished in sixth with Norris eventually recovering to seventh place. Alfa Romeo’s Kimi Raikkonen finished in eighth place for his first race back since contracting COVID-19. Perez finished inside the points for ninth with Russell rounding out the top ten.

Stroll, who collided with his teammate when Vettel tried a move around the outside finished in 11th with the German in 12th.

Gasly finished in 13th place ahead of fellow countryman Ocon. Leclerc, who also gambled on dry tyres, finished down in 15th place. Antonio GIovinazzi finished in 16th for Alfa Romeo with Yuki Tsunoda finishing in 17th for AlphaTauri. Nikita Mazepin finished his home race last of the runners for Haas.

Nicholas Latifi for Williams and Schumacher were the only non-finishers.