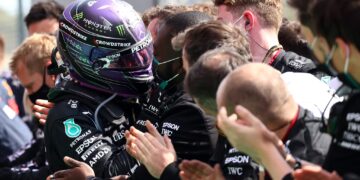 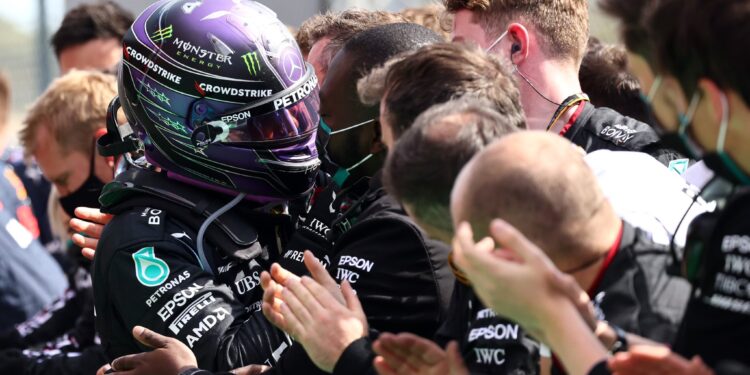 After starting on pole, it was Bottas who got the advantage during the early stages of the race, but was quickly passed by Hamilton on track and Verstappen at the pitstop.

Hamilton, who now extends his lead in the drivers’ Championship, cruised to victory once he got in front. The Briton did struggle with lack of grip from his tyres but managed his race perfectly to claim his 97th career win.

Verstappen should be pleased with second place after starting the race in third on the grid; however he lost out a bonus point to Bottas due to his time being deleted for exceeding track limits at turn 14 – something which he seemed unhappy about post-race.

At the race start, the two Mercedes cars bolted off the grid and whilst Red Bull’s Sergio Perez made it up to fourth passing Ferrari’s Carlos Sainz.

However, the Safety Car was immediately brought out to deal with an accident between the Alfa Romeo cars on the second lap. Kimi Raikkonen clipped Antonio Giovinazzi’s rear left, ripping the wing off the Finnish driver and forcing him to retire from the race.

Once the danger was cleared, the race resumed on lap seven – Verstappen made the most of the restart and passed Hamilton into turn one taking second place. However, the Dutchman made a mistake later in the lap and this allowed Hamilton to retake second place.

Further down the field, McLaren’s Lando Norris managed to pass Perez for fourth place; the Mexican feeling Norris had overtaken him off the track. Perez managed to reel in the McLaren driver and overtook him a few laps later.

With a few faster laps, Hamilton closed in on race leader Bottas and scythed past his teammate on lap 20 to take the lead at turn one.

When it came to the pitstops, Verstappen was the first to gamble and came in on lap 35 swapping his medium tyres for hards. Mercedes brought Bottas in to respond and initially came out in front of the Dutchman, but with his tyres nicely warmed up, Verstappen passed Bottas to retake second place. Hamilton pit a lap later and managed to comfortably rejoin in the lead.

Perez nursed his tyres perfectly and was the last of the front runners to pit. After being slightly wrong-footed by Haas driver Nikita Mazepin when trying to lap the Russian, he elected to fit the soft tyres and joined in fourth, ahead of McLaren’s Norris.

Charles Leclerc had a solid race for Ferrari who managed to overtake his teammate Sainz and finish in sixth place. The Spaniard was unable to hold on to his medium tyres and finished outside of the points.

Esteban Ocon and Fernando Alonso finished a strong seventh and eighth for Alpine. The car has been quick all weekend and Alonso stamped his authority towards the end of the race making moves on Daniel Ricciardo and Pierre Gasly.

Ricciardo overcame is difficulties in qualifying and stormed his way from 16th on the grid to finish in ninth, whilst Gasly rounded out the top ten.