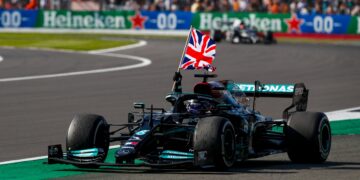 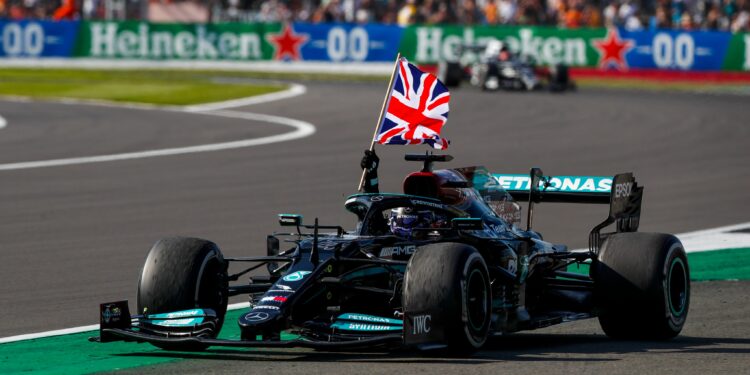 British Grand Prix – Mercedes’ Lewis Hamilton has won his home race after a late charge to take the lead from Ferrari’s Charles Leclerc and an early collision with rival Red Bull’s Max Verstappen.

The Briton managed to take victory despite colliding with Verstappen on the first lap, and receiving a 10 second time penalty for the incident. Whilst clawing his way back through the field, a late charge on Leclerc saw Hamilton take the win with two laps to go.

At the start, Hamilton managed to make a better start than Verstappen as he charged into Turn 1 in the lead. However, Verstappen fought back and went around the outside of the Briton at the complex.

The pair fought side-by-side, and when Hamilton attempted a move up the since of the Dutchman, the pair touched. Verstappen careered off into the barriers taking heaving damage to his RBR16B and retiring from the race. Hamilton was able to continue, but racing stopped as a Safety Car was converted to red flags to deal with the damage.

Verstappen endured a 502G impact to his leg and was sent to hospital for checks.

Meanwhile, Ferrari’s Charles Leclerc took the lead of the race just before the racing was stopped.

Both teams started to raise complaints with the stewards, with Toto Wolff and Christian Horner taking to the FIA to explain their stance. The stewards deemed Hamilton to be at fault and slapped the Mercedes driver with a 10 second time penalty.

The race then resumed after a long wait to fix the tyre barrier from the Hamilton and Verstappen accident. Leclerc managed to keep the lead as the lights went out a second time, and behind McLaren’s Lando Norris managed to take third place from Mercedes’ Valtteri Bottas.

The race then settled down into a rhythm as Leclerc managed to maintain a gap to Hamilton in the opening set of laps. However, things looked grim for the Monegasque as Leclerc started to report issues with his engine over the radio and Hamilton closed within DRS range of the Ferrari. Despite this, the Ferrari still kept going and even set the fastest lap on Lap 20.

Norris became the first of the front runners to pit on Lap 22, but an issue at the right rear caused the Briton to remain idle for six seconds. He was released behind the Alpine of Fernando Alonso. Mercedes then elected to bring in Bottas a lap later to capitalise on Norris’s slow stop.

Bottas emerged in behind Alonso, but crucially in front of Norris. The Finn managed to pass Alonso a few corners later and pulled out a gap to Norris that he would be unable to close for the rest of the race.

Hamilton then pit on Lap 27 and served his time penalty. The Briton emerged behind Norris in fifth and went about hunting down the McLaren.

Ferrari were running first and second at this point with Carlos Sainz behind his teammate. The Spaniard pit on Lap 29 but endured a horrible stop staying stationary for 12 seconds. Sainz joined well down the order and behind Ricciardo.

Leclerc came into the pits on Lap 30 and rejoined back in the lead of the race. Meanwhile, behind, Hamilton made his way past Norris for third place.

The sole remaining Red Bull of Sergio Perez started the race on the hard tyres and ran long into the race. He was unable to make good progress and came into the pits on Lap 39. The Mexican rejoined in 17th place, but on fresh medium tyres.

Meanwhile, up front, Hamilton started to catch Bottas and came over the radio to complain about his teammates’ dirty air. The team then radioed Bottas to yield the position to Hamilton which was done at Turn 15 on Lap 41.

Hamilton then set about pumping in fastest laps to catch Leclerc ahead by one second per lap. The Mercedes driver caught and passed Leclerc on Lap 50 to a roaring capacity Silverstone crowd.

Pierre Gasly was running in the points for AlphaTauri, but a puncture on Lap 48 saw him come into the pits and drop out of the top ten.

Perez, who pitted late in the race to fit softs, claimed the fastest lap of the race from Hamilton. However, the Mexican is under investigation by the stewards for an incident with Alfa Romeo’s Kimi Raikkonen on Lap 48. The incident will be investigated after the race.

Aston Martin’s Sebastian Vettel retired from the race on L41 with a problem with his car, whilst Verstappen was the only other retiree.