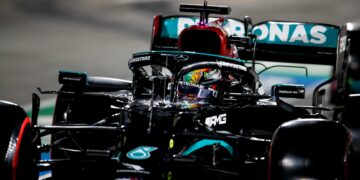 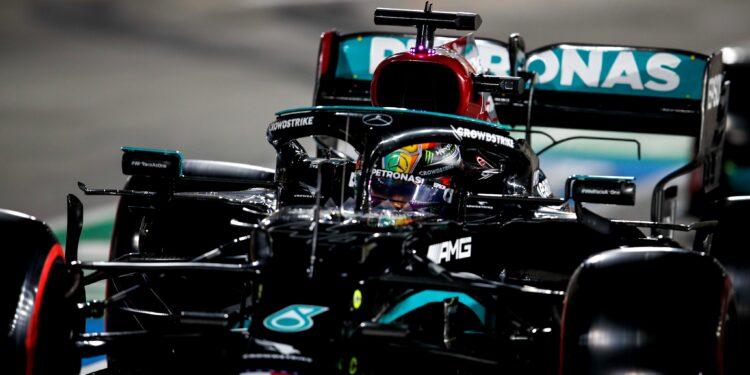 Qatar Grand Prix – Mercedes’ Lewis Hamilton has taken a lights to flag victory at the Qatar GP to reduce the gap to Red Bull’s Max Verstappen in the championship to just seven points.

Verstappen finished in second place after a heroic start which saw the Dutchman to move from seventh to fourth on the opening lap. However, Red Bull had no answer for Mercedes as Hamilton crossed the line to take a dominant victory. A Virtual Safety Car brought out to deal with late tyre failures on both Williams cars ensured the Verstappen would take the fastest lap and an extra point.

A stellar drive from Alpine’s Fernando Alonso saw him claim his first podium for the team and of the season, seeing off Sergio Perez in the Red Bull in fourth place.

Drivers were keen to stick to the right side of the track, even on the formation lap, due to the low grip. At the start, Hamilton got away well, but Verstappen was the big winner who moved up from seventh to fourth place. Bottas in the other Mercedes had a disastrous start and fell from sixth to 11th place on the first lap.

As Verstappen started to contend with other cars in front, Hamilton built out a gap of four seconds over the rest of the field. Fernando Alonso in the Alpine managed to move up into second place, leapfrogging Pierre Gasly in the AlphaTauri.

In a move that seems premeditated, Verstappen breezed past Gasly shortly after getting over the radio to his team to exclaim he was being held up.

Verstappen fought his way up into second place, but struggled to chase down Hamilton and was some eight seconds behind the race leader. Sensing an undercut, Red Bull elected to bring Verstappen in on Lap 20 to switch to a one-stop strategy. The Dutchman came out clear in second place on fresh hards.

Hamilton pit a lap later to mirror Red Bull’s strategy and maintained his lead over the Red Bull. Strangely, Red Bull chose to pit Perez and switch to softs, putting him out into traffic. However, the Mexican was able to fight his way up into fourth place, disposing of Alonso with a move around the outside of Turn 1.

On Lap 34, Bottas brought out the yellow flags as he suffered a spectacular front left puncture and had to limp back to the pits for new tyres and a new front wing. The Mercedes driver came out in 14th place having done 33 laps on his medium tyres.

On Lap 42, Verstappen came into the pits for fresh medium tyres, rejoining clear in second place. Red Bull looked to be forcing Hamilton into a two stop, and the Mercedes driver looked to be holding firm.

Perez pit a lap later disposing his hard tyres for mediums. Mercedes chose to bring Hamilton in for some used medium tyres immediately after and maintained his lead up front. Perez came back out onto track down in seventh place as the Mexican chased down the Aston Martin of Lance Stroll in sixth. In the pitstop chaos, Alonso got promoted back up into third place, albeit, nearly 40 seconds down on the leader.

A new fastest lap from Hmailton on Lap 45, ensured that the Mercedes driver put himself nine seconds clear of Verstappen behind. However, Verstappen clocked in a 1:25.030 to steal the extra point and reduce the gap to below nine seconds.

The drama didn’t end as Williams teammate Nicholas Latifi was another driver to experience a front left puncture and had to crawl back to the pits, bringing out the yellow flags.

The Virtual Safety Car was brought out with two laps remaining as Latifi’s Williams had yet to be recovered. This allowed Verstappen to come into the pits for fresh tyres

But Red Bull has no answer for Mercedes as Hamilton crossed the line to claim victory from Verstappen.

Esteban Ocon finished in fifth to round out a good day for Alpine, with Lance Stroll having a strong race for Aston Martin in sixth.

The Ferrari’s finished in seventh and eighth with Carlos Sainz getting the better of his teammate Charles Leclerc. Norris managed to salvage some points for McLaren finishing in ninth place, with Sebastian Vettel in the Aston Martin rounding out the top ten.

Gasly was unable to make good on his second place start and finished outside the points in 11th ahead of McLaren’s Daniel Ricciardo in 12th. Yuki Tsunoda in the other AlphaTauri finished in 13th place ahead of the two Alfa Romeo cars of Kimi Raikkonen and Antonio Giovinazzi.

Mick Schumacher finished in 16th place for Haas, with Russell 17th after the late tyre drama. Nikita Mazepin was the last of the finishers in 18th for Haas.

Latifi and Bottas were the only two retirements from the race.