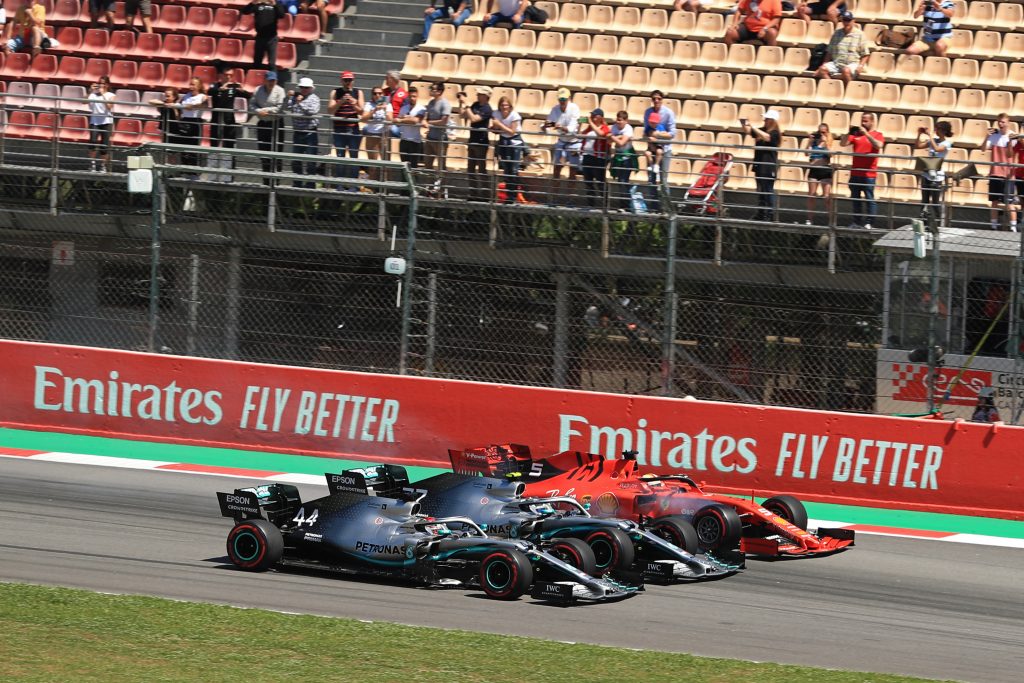 After being beaten to pole position by his Finnish teammate on Saturday, Lewis Hamilton proved untouchable on Sunday as the Spanish Grand Prix began. Hooking up his initial getaway better than Bottas did, Hamilton was able to take the inside line into Turn 1 and took the lead. Bottas ended up being sandwiched into the first corner as Sebastian Vettel got his Ferrari alongside the Mercs but was stuck on the outside.

As a result of being positioned on the outside, Vettel lost position as he ran a little wide through Turn 1. This baulked the progress of teammate Charles Leclerc through Turn 2, allowing Max Verstappen to sweep around the outside of both of them and into P3 behind the two Mercedes drivers.

After being released into the lead, Hamilton proved unstoppable as he opened up a lead over Bottas. Verstappen was able to keep Bottas under pressure throughout the opening stint but the Ferraris behind were not enjoying their predicament. Vettel had flatspotted his front tyres during the opening battle and wasn’t particularly fast. This meant that Charles Leclerc behind had to try getting ahead as the obviously quicker driver. Vettel eventually released his teammate but, at this point, Mercedes were over ten seconds clear up the road.

Vettel was the first of the leading pack to pit on Lap 19 when he came in and swapped to the Mediums. Max Verstappen followed suit a lap later, but took on another set of Softs, while Charles Leclerc, Valtteri Bottas and Lewis Hamilton all waited a few more laps. While both Mercs went Medium for the middle stint, Charles Leclerc took on the Hard tyre in an evident one stop.

This tactic proved to be in vain as a Safety Car came out with twenty laps to go. This was to cover a collision between McLaren’s Lando Norris & Racing Point’s Lance Stroll at Turn 2. With Sebastian Vettel and Max Verstappen having just pitted for the second time for Medium tyres, Lewis Hamilton & Valtteri Bottas were able to come in under the Safety Car and take on used Soft tyres to get to the flag.

When the race resumed, Hamilton quickly stretched his lead back up to three seconds over Bottas and crossed the line to claim the victory. Verstappen finished in P3 ahead of the two Ferraris with Vettel ahead of Leclerc. Pierre Gasly finished P6.

Best of the rest went to Kevin Magnussen. The Haas driver came under serious pressure from teammate Romain Grosjean close to the finish and the pair made contact at one point while fighting into Turn 1. Grosjean initially looked to have more pace than Magnussen but faded badly after that attack as he was passed by Carlos Sainz and Daniil Kvyat. Sainz claimed P8 for McLaren, four seconds behind Magnussen and less than a second ahead of the Toro Rosso. Grosjean held on to take the final points place.

Outside the points, Alex Albon finished in P11 in the second Toro Rosso while Daniel Ricciardo made scant progress from his P13 qualifying position. The Australian was P12 and finished just ahead of Nico Hulkenberg. The German driver started on the Medium tyre from the pitlane and used a one stop strategy to work his way up to P13. Kimi Raikkonen finished P14 for Alfa Romeo on a disastrous day for the team with poor race pace, and an early race mistake from the Finn that sent him flying through the gravel at Turn 4.