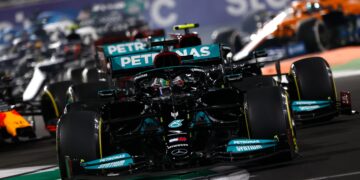 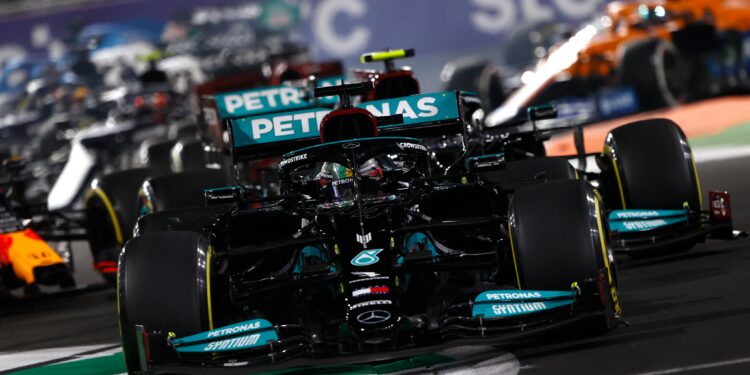 In a race marred with stoppages, Hamilton crossed the line ahead of Verstappen to go level on points heading into the final round at Abu Dhabi.

It was a perfect start for Hamilton as the top three held station when the lights went green The Mercedes driver lead from his teammate Bottas and championship leader Verstappen at the lights.

After the first few laps, the field started to spread out with the top three outside of DRS range of each other. Two seconds separated the Mercedes drivers on Lap 10 with Verstappen nipping at their heels just over a second behind.

As the Safety Car came out, Hamilton entered the pits followed closely by Bottas as Mercedes elected to double-stack their cars. Verstappen carried on to take track position and the lead of the race.

There was brief controversy just as the Safety Car came in. Red Bull seemed irked by Bottas’s pace on the lap before he pit, seemingly to slow down the pace and allow for a gap between himself and Hamilton for the double-stack pitstop.

The Red Flags were shown three laps later and the news was music to Red Bull’s ears. With Verstappen able to change tyres, the Dutchman was effectively on pole for the second half of the race.

With the barriers damaged, Race Director Michael Masi elected to halt the race so circuit officials could replace damaged elements. The session resumed at 21:15 local time.

The cars lined up for a second restart, with Verstappen feeling as though Hamilton was going too slow on purpose on the formation lap.

At the start Hamilton got the better getaway, but Verstappen hung on around the outside, but left the track at Turn 2 and bounced across the kerbs pushing Hamilton wide. Alpine’s Esteban Ocon seized the initiative and passed Hamilton into second place.

The Red Flags were immediately brought out to deal with another smash as Red Bull’s Perez got tagged from the rear by Ferrari’s Charles Leclerc. In the melee, Haas driver Nikita Mazepin ploughed into the Williams of George Russell, unsighted as cars in front slowed for the incident.

Red Bull were given the opportunity to start from grid position two by Michael Masi and the team accepted on the basis that Ocon would start on pole. However the FIA clarified that Verstappen would start behind Hamilton. Red Bull eventually chose to accept the new grid of Ocon, Hamilton, Verstappen.

After a lengthy delay to clear up the debris, the session resumed at 21:40 local time with the FIA electing to go for another standing start.

At the third start of the evening, Verstappen was able to snatch second from Hamilton after Ocon and the Briton briefly touched going three wide into Turn 1. Hamilton was able to take second place from Ocon a lap later and set about chasing down the Red Bull.

On Lap 21, Hamilton dragged his Mercedes to under one second back from Verstappen, which allowed the Briton to use DRS.

The virtual safety car was brought out to deal with Yuki Tsunoda’s stricken AlphaTauri. The Japanese driver tagged the back of Sebastian Vettel’s Aston Martin punting both cars into the barriers. Tsunoda was able to limp back to the pits, minus his front wing. Tsunoda received a five second time penalty for the incident.

With Tsunoda replacing his wing, the VSC was disabled and the drivers resumed racing on Lap 24. Hamilton set the fastest lap on Lap 25 putting him within DRS range of Verstappen ahead. The Mercedes seemed to have the edge on the straight, but lost out time in the twisty sector one.

The VSC was deployed again to deal with an incident between Alfa Romeo’s Kimi Raikkonen and Vettel. The pair got close which left debris strewn across the track. The carbon fibre was cleared quickly and racing resumed.

On Lap 29, the VSC was brought out again as the track was still littered with carbon fibre from the Alfa Romeo and Aston Martin. Alpine’s Fernando Alonso was particularly vocal calling for a full safety car to clear the track.

After a long VSC period, the racing resumed on Lap 32. Verstappen set the new fastest lap of the race on Lap 33, but it was immediately beaten by Hamilton by just 0.08s.

Another new fastest lap from Hamilton with a 1:31.199 put the Mercedes within DRS range, however the Briton’s charge was halted by yet another VSC to recover a piece of Vettel’s Aston Martin on the track.

The racing resumed quickly and Hamilton went for the move into Turn 1 but Verstappen didn’t yield. Hamilton looked to be ahead in Turn 1, but the pair touched. The drama didn’t end as Verstappen was told to yield the position, and the Dutchman looked to slow, but Hamilton clipped the back of the Red Bull and damaged his front wing.

The damage didn’t seem to hinder Hamilton who set the fastest lap and closed within 1.6s. However Verstappen did yield the position into the last corner, but overtook Hamilton immediately on the back straight. Verstappen would yield the position a lap later, but received a five second time penalty for leaving the track and gaining an advantage.

With Verstappen unable to pit for fresh tyres due to Ocon behind being within pitstop range, Hamilton was free to cross the line to take victory.

Bottas was able to narrowly secure a double podium for Mercedes by pipped Ocon at the line for third. Daniel Ricciardo came home in a solid fifth place for McLaren with Pierre Gasly finishing in sixth for AlphaTauri.

The Ferrari pair if Charles Leclerc and Carlos Sainz finished in seventh and eighth respectively, with Antonio Giovinazzi in ninth for his penultimate race for Alfa Romeo. Lando Norris managed to scrap his was up into the points for McLaren finishing in tenth.

Lance Stroll finished in 11th for Aston Martin with Nicholas Latifi in 12th for Williams. Alonso finished in 13th ahead of Tsunoda in 14th. Raikkonen was the last of the finishers in 15th.

Vettel, Perez, Mazepin, Russell, and Schumacher were the retirements.