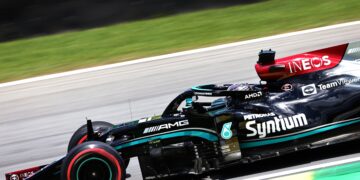 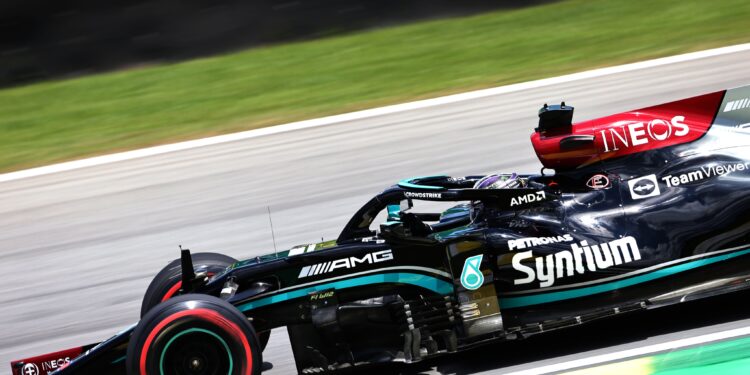 The Mercedes driver crossed the line in first to close down the gap to title rival Max Verstappen to 14 points. The Red Bull driver finished in second place, ahead of Valtteri Bottas in the Mercedes.

It was a tense race which saw drama as Hamilton and Verstappen came off when the Red Bull driver forced Hamilton wide after the Mercedes driver tried a move around the outside.

However, Hamilton made the move stick on the second time of asking and, with 10 laps remaining, took victory at Sao Paulo.

At the start Verstappen scythed into the lead down the inside of Turn 1 getting past the Mercedes of Bottas. Further around Lap 1, Bottas ran wide at Turn 3 which allowed the other Red Bull of Sergio Perez to climb up into second place.

It was disaster for McLaren’s Lando Norris who had a clash with a Ferrari’s Carlos Sainz taking a puncture and having to come around the track to pit for a fresh set of boots.

Meanwhile, Hamilton, in just one lap, dragged his Mercedes up into sixth place, passing four cars from his starting position.

On Lap 3, Hamilton jumped up into fifth place passing Ferrari’s Carlos Sainz into Turn 1. A lap later, he took the other Ferrari of Charles Leclerc, before passing his teammate Bottas to move into third place. The move was planned from the team as the Finn was instructed to pass

The Safety Car was deployed on Lap 7 to deal with the debris that was strewn across the track following a clash between AlphaTauri’s Yuki Tsunoda and Aston Martin’s Lance Stroll. The Japanese driver tried a move down the inside of the Canadian at Turn 1, but came in too fast and ploughed into the side of the Aston Martin. The incident was investigated by the stewards and Tsunoda was slapped with a 10 second time penalty.

Tsunoda had to pit for a new front wing and both drivers were able to continue.

The Safety Car was music to Mercedes’ ears as it allowed Hamilton to close right up to the back of the Red Bull pair. It was good news for sister team AlphaTauri and McLaren too as Tsunoda and Norris were able to rejoin the back of the field after their earlier incidents.

The Safety Car came back into the pits on Lap 10 and at the restart it was as you were with Verstappen leading Perez, Hamilton, and Bottas.

There was drama for Mick Schumacher who damaged his front wing defending with Alfa Romeo’s Kimi Raikkonen. The wing was stuck underneath the German’s Haas and the resulting debris on the track brought out a Virtual Safety Car. The Haas driver returned to the pits for repairs and the VSC ended on Lap 13.

Lap 16 and it was all square up front with Hamilton within DRS range of Perez’s Red Bull. Perez got over the radio to implore his team to slow Verstappen down to give the Mexican DRS to defend from Hamilton. However the Dutchman wasn’t compliant and pulled out a gap of 3.7 seconds.

Hamilton managed to dive down the inside of Perez on Lap 18, but Perez wasn’t going to be bullied and re-passed the Briton into Turn 3. The Mercedes driver tried again down the pit straight a lap later and managed to get passed Perez to move up into second place. The Briton made the move stick and set about chasing after Verstappen by setting a new fastest lap of 1:14.300.

It was nip and tuck up front as the leading pair were separated by just 3.6 seconds. However, Hamilton started to eat into Verstappens lead and got the gap down to 3.4 seconds by Lap 21.

Pierre Gasly was the first to blink who brought his AlphaTauri into the pits for fresh tyres on Lap 25.

On Lap 26, Hamilton came into the pits to attempt the undercut on the Red Bull cars up front. The Briton rejoined in fifth place, however, Verstappen pit a lap later coming out just in front of Hamilton in third.

The pitlane was a flurry of activity with Leclerc also coming in to the pits, dropping him down to ninth place, just in front of Norris. Perez came into the pits on Lap 28, but came out behind Ricciardo’s McLaren in fifth place.

With fresh tyres and a sense of purpose, Hamilton set a new fastest lap of the race with a 1:13.364 putting him within 1.2 seconds of Verstappen up front.

The Virtual Safety Car was deployed on Lap 30 to deal with debris which was flung from Stroll’s Aston Martin. This allowed Bottas, Ricciardo, and Alpine’s Esteban Ocon to pit. It was a prime move from Mercedes who got Bottas out in front of Perez in third place.

The VSC was brought in a lap later and Hamilton was on the hunt getting himself within DRS range of Verstappen. The Red Bull driver responded with a new fastest lap of 1:13.225, but it was immediately beaten by Bottas who set a 1:13.002.

At the half way point, it was still Verstappen leading Hamilton, but the Mercedes driver had dropped back to 1.2 seconds behind the Red Bull. A combination of dirty air and tyre saving kept Hamilton at bay so far.

On Lap 37, Norris came into the pits for fresh tyres dropping from ninth to 17th.

Verstappen came into the pits on Lap 40 to fit fresh hard tyres – however it looks like his attempt at an undercut was halted with Nicholas Latifi’s Williams coming out of the pits in front of him. The Dutchman came back out into third place.

Mercedes responded by bringing Bottas into the pits a lap later, leaving Hamilton out longer. The Finn dropped down to fifth place behind Leclerc in the Ferrari, but managed to get past the Monegasque straight away.

On Lap 42, Perez was the next car to pit, promoting Bottas into third place, coming out behind Leclerc. Hamilton then came into the pits a lap later with Verstappen setting fastest laps behind.

The Briton came out of the pits 2.6 seconds behind Verstappen in the lead, whilst Bottas behind set the fastest lap of a 1:12.862.

With tyres much fresher, Hamilton smelled blood and started to charge after Verstappen up front. The Briton clawed back time to just 1.6 seconds to Verstappen. However, Bottas got over the radio to exclaim that “we just threw away an easy one-two there”, clearly wishing for a one stop strategy.

With track position, but crucially tyres that were three laps older, Verstappen tried to hold on to the lead, but a new fastest lap of a 1:11.982 put Hamilton within DRS range of the Red Bull.

The gloves came off as the title contenders locked horns up front – Hamilton tried a move around the outside of Turn 3 on Lap 48. However, Verstappen forced Hamilton wide to try and defend, forcing himself off the track at the same time. The incident was noted by the stewards, but the FIA deemed no investigation was necessary.

A bad day for Stroll got worse as his Aston Martin succumbed to the damage sustained earlier in the race and retired on Lap 50.

Ricciardo was the next car to retire from the race as the Australian brought his car into the pits on Lap 51.

Lap 58, and Hamilton tried again around the outside of Turn 3, but couldn’t make the move stick. However, a lap later, Hamilton had a good run on Verstappen and breezed past the Red Bull into Turn 3 to snatch the lead from the Dutchman and push on ahead. Due to some excessive weaving on the straight, Verstappen was shown the black and white flag.

Further back, the two French drivers Ocon and Gasly dueled on Lap 60 as they banged wheels into Turn 1. Gasly managed to get ahead of Ocon and also snatched seventh from Fernando Alonso in the other Alpine.

Perez came into the pits on Lap 70 to claim fastest lap of the race for a crucial point in the constructors’ championship.

However there was no holding back Hamilton who crossed the line to take victory, and close down the gap to Verstappen in the championship to 14 points.

Perez finished in fourth place, three seconds adrift of Bottas. It was a good day for the Ferrari’s with Leclerc finishing in fifth and Sainz in sixth.

Gasly finished in seventh place ahead of the two Alpine cars of Alonso and Ocon. Norris managed to salvage a point for McLaren by finishing in 10th place.

Sebastian Vettel finished in 11th for Aston Martin ahead of ex-teammate Kimi Raikkonen in the Alfa Romeo. George Russell finished in 13th for Williams with Antonio Giovainzzi in 14th for Alfa Romeo.

Tsunoda finished in 15th ahead of Latifi in 16th. The two Haas drivers of Nikita Mazepin and Mick Schumacher were the last of the finishers.

There were only two retirements which were Ricciardo and Stroll.