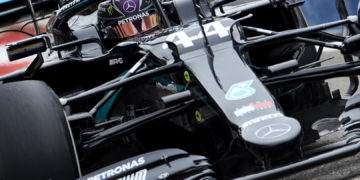 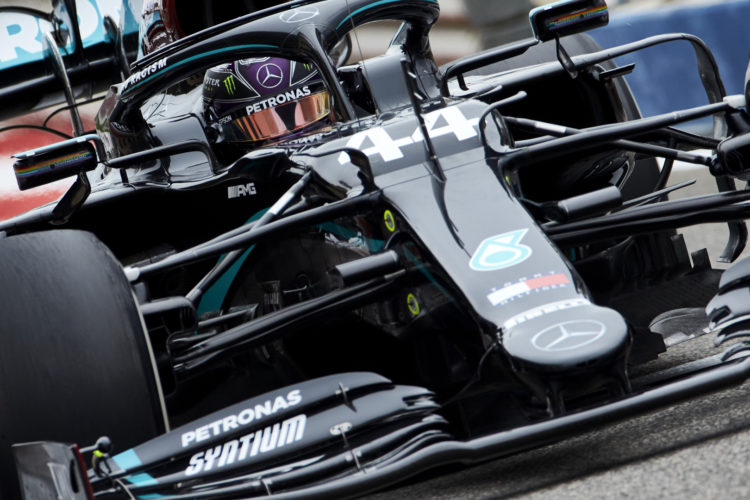 Bahrain Grand Prix – Mercedes’ Lewis Hamilton has won a processional Bahrain GP, but all focus was on Haas’ Romain Grosjean after he escaped a horrific opening lap crash.

Click here for the complete results from the 2020 Bahrain Grand Prix.

Lewis Hamilton has won the Bahrain Grand Prix, leading from start to finish for Mercedes.

The race was marred by a horror smash on the opening lap, with Romain Grosjean smashing into the barrier in his Haas. Grosjean had been racing with Daniil Kvyat through Turn 2 when the French driver swerved across the front of the Alpha Tauri. Tagging the front of Kvyat, Grosjean speared off into the barrier at high speed. The car split in half, with the front half punching its way through the armco barrier, while the rear exploded in a ball of flame on the circuit side of the barrier.

Grosjean extracted himself from the car engulfed in flames, with the Medical Car crew battling the flames to help him. Shell-shocked after getting out of the car, he was helped to the Medical Car by Alan Van der Merwe to be brought to the helicopter for extraction to hospital. Grosjean is suspected to have suffered a broken rib, and some minor burns from the flames. Replays showed that the Halo unquestionably saved his life, with the safety device taking the brunt of the impact with the barrier as the car punched through the barrier.

With the race suspended for a full hour as the barriers required extensive repair under the watchful eye of Race Control, the Grand Prix finally resumed with Hamilton starting from pole position. Max Verstappen started from P2 after getting past Valtteri Bottas on the original start. Coming under serious pressure from Sergio Perez’ Racing Point on the second start, Verstappen held onto P2 to try keeping up with Hamilton.

However, Hamilton went untouchable throughout the race. He never lost the lead, including throughout his two pitstops. Max Verstappen came home in P2, close behind due to a late Safety Car intervention. Sergio Perez, who had looked nailed on for P3 for Racing Point, lost the position and was knocked out of the race due to an engine failure within sight of the chequered flag. As a result, Alex Albon was promoted to the final podium spot, coming home in P3 as the train of cars passed the chequered flag under Safety Car conditions.

Lando Norris finished P4 for McLaren, with Carlos Sainz working his way up to P5 in the second McLaren. The Spaniard put in a stellar first stint on the Softs to bring himself into contention after starting from P15 on the grid.

Pierre Gasly finished P6 for Alpha Tauri. He looked set to finish lower, as he was struggling after running a long stint on the Hard tyres to get to the chequered flag, but was saved by the Safety Car intervention that prevented Daniel Ricciardo and Valtteri Bottas behind from attacking.

Bottas, having started from the front row, lost five positions on the original start and suffered a puncture when the race restarted. This shuffled him right to the back of the field and with it all to do.

Daniil Kvyat finished P11 for Alpha Tauri. Having been caught up in Grosjean’s first lap crash, Kvyat was involved in a further incident on the restart. Attempting to pass Lance Stroll’s Racing Point, he tagged the right rear of the Canadian’s car and flipped Stroll upside down. He was uninjured and clambered out of his upsided car while the race was put under a further Safety Car. Kvyat was given a ten second time penalty for the incident.

George Russell finished P12 for Williams, holding off the Ferrari of Sebastian Vettel. The German driver struggled throughout the race, spinning off shortly after the second start and falling down to last. However, he never appeared to have any pace with any possible position gain negligible as he bemoaned his car as ‘undriveable’.

Nicholas Latifi finished in P14 for Williams, with Kimi Raikkonen down in P15 for Alfa Romeo ahead of teammate Antonio Giovinazzi. Kevin Magnussen was the last classified finisher, in the remaining Haas.

Sergio Perez, Lance Stroll and Romain Grosjean were the three drivers not to reach the chequered flag.