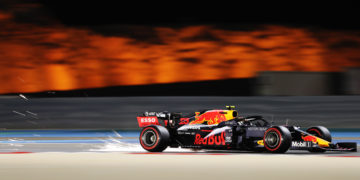 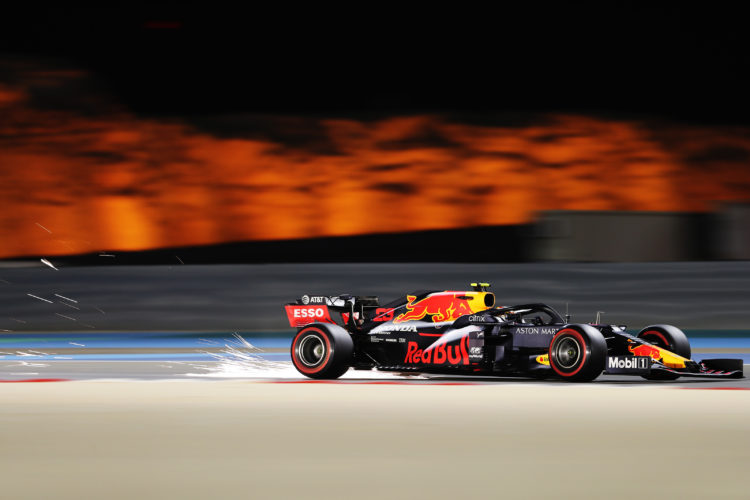 Bahrain Grand Prix – Red Bull’s Alex Albon brought out the red flags in second practice as he crashed his RB16 at the final corner. Albon was classified P10 in the second practice session at Sakhir, despite missing the final half hour of track time.

The Red Bull driver had just passed Alpha Tauri’s Pierre Gasly going down the back straight when he appeared to carry too much speed into the final corner. Running wide onto the sand, Albon lost control of the rear as he tried to resume the circuit and speared off sideways into the barriers. Hitting the barriers facing against the flow of the circuit, the right hand side of the car was destroyed as it came to a stop.

The red flags were shown while the car was recovered. Albon was uninjured but brought to the Medical Centre for precautionary checks.

“It was OK, I’ve had a few of them so used to it but it was OK.” Albon said afterwards. “It was just one of them things that should have got pulled out of really. It was a difficult awkward angle, that crash, and not fun but all good. I’m sorry to the guys in the garage.”

Asked whether it was just a case of not backing off when he should have, Albon explained that he thought he had done enough: “I mean I did back out but not enough obviously. Because like when you have one tyre on the astro and one tyre on the grip – that’s when the tankslappers happen.”

Heavy damage to the right-hand side of the car and Albon's session is over.

Apart from that, Albon was pretty happy with the general feeling of the car, saying “Straight away from FP1 the car was feeling pretty good and then in FP2 we tried a couple of things that didn’t quite work out.”

“Throughout the year we’ve suffered with the rear tyres but strangely here it seems to be the fronts so we’ll have to look at that and see how to make them last longer. We also sampled the prototype tyres and swapped between different compounds but they didn’t have a lot of grip so we’ll see how they develop and hopefully they improve.”

Team boss Christian Horner spoke after the session, saying that the incident was frustrating: “There is a lot of superficial damage, the monocoque looks okay, the engine looks okay. It’s not a race gearbox but it’s certainly going to keep the guys busy tonight.”