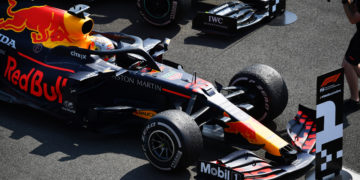 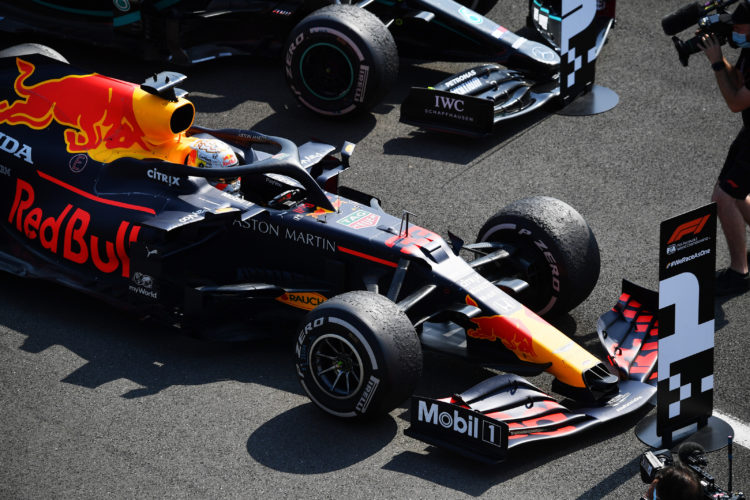 70th Anniversary Grand Prix – How did Max Verstappen rise from P4 on the grid to defeat both Mercedes drivers in a straight battle?


Max Verstappen clinched a convincing victory ahead of both Mercedes drivers on Sunday at Silverstone. The Dutch driver won the race after Red Bull’s disruptive strategy managed to wrong-foot Mercedes. Hamilton and Bottas struggled throughout the race with tyre blistering but would still have been in a race of their own had Verstappen not forced himself into the mix.

It was always going to be a more unpredictable race than last weekend’s British Grand Prix, thanks to Pirelli bringing along tyres that were a step softer than last week’s, meaning this week’s Medium was last week’s Soft, and so on.

The seeds of the victory were sown on Saturday afternoon at the start of Q2. The drivers must start the race on the tyres used to set their fastest time in this session, meaning there’s a chance to roll the dice with strategy. It’s a delicate balancing act, as drivers need to place in the top ten to get into Q3, while also thinking about keeping their tyres in optimum condition for the first stint of the race.

Mercedes, with their ultimate one lap pace seemingly out of touch of anyone else, went for the Medium compound, as did pretty much everyone else. However, Verstappen went for the Hard compound. Pirelli said this tyre was half a second slower than the Mediums, so it was a stellar effort from Max to put in a time less than a second slower than what Valtteri Bottas managed. He made it into Q3 by just 0.106 seconds, and the crucial first step was done.

After being pipped to P3 by Nico Hulkenberg, the next step was to clear the Racing Point driver as quickly as possible. Max managed it within the first hundred metres, with Hulkenberg maybe not razor-sharp as he started a race in an unfamiliar car for the first time. Max lost a little bit of initial ground to the Mercs as they enjoyed the initial benefit of the Medium compounds but, by Lap 5, this pace difference equalised and he started closing in on the Mercs.

Over the next few laps, Verstappen hounded Hamilton despite Red Bull telling him to slow up to relax his tyres. Seeing an opportunity to pressure the Mercs, Max said he ‘wasn’t going to drive a grandma’ and explained afterwards: “I was already managing but their tyres were completely gone. I could see the tyres opening up. It was also very expected with these tyres, especially on high fuel, when the car is very heavy. But I didn’t just want to sit behind, like I’ve been doing at the previous races all the time, so once I had the opportunity to put a bit of pressure on, I want to do that. So, I tried. I had a big moment once, when I was close to Lewis in Turn 13, because it’s really hard to follow, even when I have the grip advantage with these cars – but of course then it was just impossible for them to continue, so they boxed. And that’s where my race started.”

Bottas pitted on Lap 13, with Hamilton following him in on Lap 14. Both took on the Hard tyres that Max was enjoying so much and showed some good initial pace to close in a little but, within just a few laps, their pace began to drop off. So much so that Max, on 20+ lap old Hards, was streaking away by around half a second a lap to increase his lead to 20 seconds at half distance. Red Bull brought him in on Lap 26, putting him on the Mediums, and he came out alongside Bottas. He technically lost position, but used his tyre advantage to pass Bottas into Luffield.

This was the only real mistake from Red Bull in the race. Verstappen had been pulling away effortlessly just before his stop, so it was a bit strange that they’d bring him in before being sure of clearing Bottas more easily. Verstappen explained that the stop wasn’t forced due to tyre worries, but that the stop had just been a little bit slow: “I never really had any struggles and I could extend that first stint, which I think was key. My stop was not great, one wheel was a bit slow, so I came out behind Valtteri but then I had the softer compound, so I had a lot more grip, so I got past Valtteri.”

Now ahead of Bottas, Verstappen’s tyre advantage faded fast. Within three laps, Bottas had pegged the gap at 2 seconds, but Red Bull had no intention of staying on the Mediums for long. On Lap 32, both Verstappen and Bottas dived into the pits and took on the Hard compound for a straightforward dash to the flag. Now with track position, it all looked pretty straightforward for Max and he said: “There was a question mark of who’s going to the fastest to the line. But I think straightaway the car felt good on those tyres again.”

Verstappen spent the next ten laps slowly edging away from Bottas, but the Finn’s pitstop had brought Lewis Hamilton into play. Having ditched his Hards on Lap 32, Mercedes had a chance to look at them and decided they were in good enough condition to keep Hamilton out to try attempting the one stop strategy. Unfortunate for Bottas, as he was essentially used as the sacrificial lamb to gauge the tyres.

Despite the blistering on Hamilton’s tyres, there was plenty of rubber under the blisters and he was able to control the gap for a while. However, Hamilton came in on Lap 41 and aborted the one stop strategy. He explained: “I was trying to go for a one-stop at the end but there was a lot of vibration with the tyres that we had and I didn’t know if the tyre was going to last if I’m being honest. Not just with the rubber but I just a rear tyre blow-out through a corner was too big a risk to take; that would have been end of race, so I think it was a good decision by the team. I was trying to keep going but there were a lot of laps to go and Max, I think at the end, was doing 28s, 29s and I couldn’t do that on the tyre old tyres.”

Now with clear track and the outright lead, Verstappen massaged his car home to win by 11 seconds over Hamilton, who used his much fresher tyres to catch and pass an annoyed Bottas for P2.

Despite the win, Verstappen says he doesn’t think the Red Bull is a Mercedes-beater just yet, and that the specific conditions of the race, and the tyres played into their hands: “I think today we were just very good on tyres and then of course you can push a lot harder on them, especially when we go back to conservative tyres everywhere – because basically most of the tracks we go to we are just doing a one stop – yeah, I think it will be a bit harder for us because then nobody really has blistering that severe, and you don’t need to manage as much as we did today. We will see. Like I’ve said before, let’s just enjoy today and then we’ll see again in Barcelona where we are.”

It’s clear, from this side of the race, that starting on the Hard tyre was the better option and, considering Verstappen made it into Q3, Mercedes could have started the race on this compound had they rolled the dice. But Hamilton says that even this wouldn’t have changed the outcome of the race: “Hindsight’s always a good thing but I really don’t know. Maybe we wouldn’t have fallen back towards Max but even on the Hard tyre we had blistering. A lot of blistering, even with a lot of management. His tyre didn’t look like it had anything on it so there’s something quite wrong, obviously, with something that we’ve done and we’ll analyse it and try to fix it for next time.”