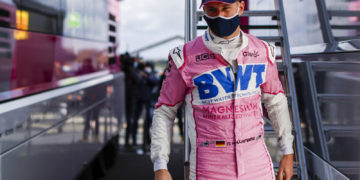 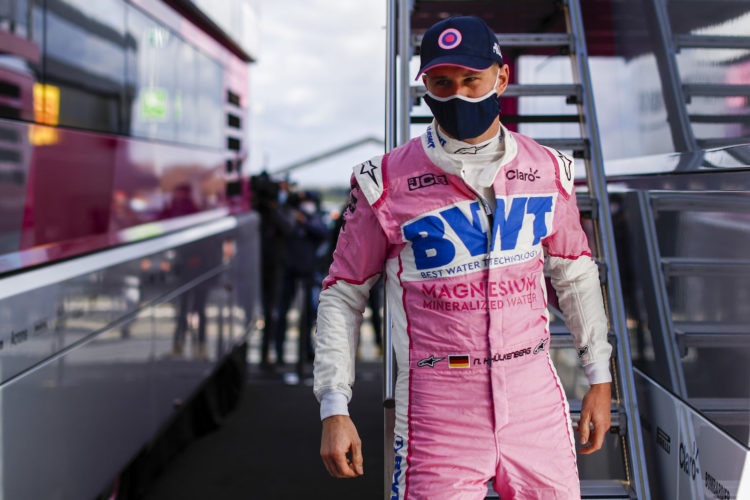 Eifel Grand Prix – Nico Hulkenberg says he’s in for a ‘hell of a challenge’ as he takes on the Nurburgring with just four flying laps completed ahead of the race.

Super-sub Nico Hulkenberg is back at the wheel of the Racing Point this weekend, as Lance Stroll is sidelined through illness.

Having been called up to race for the team at the two British rounds at Silverstone two months ago, Hulkenberg’s summons for this weekend came even later than last time – to the point where he didn’t get any practice laps in at all, unlike at Silverstone.

Hulkenberg explained that he had been due to arrive at the Nurburgring for qualifying anyway, as he had media commitments with German TV, but got the call from team boss Otmar Szafnauer to come to the track as quickly as he could. Szafnauer said: “He was on his way here anyway, I think to do some work for RTL, because I stay in contact with him. So I knew that he wasn’t far off. I called him and I said, ‘How far away are you?'”

Hulkenberg said:  “It was even wilder and crazier than last time. I was in Cologne which is kind of an hour from here. I was sat with a friend having a coffee at 11am when Otmar rang me and said: ‘Nico hurry, we need you here’. I stepped in the car, came here and the rest is history. You saw what happened now. A 2.0 return in a heartbeat!”

Getting through a very quick COVID test before entering the paddock, Hulkenberg had about 40 minutes with the engineers before he got into the RP20 and headed out for his first laps in an F1 car since finishing the race at Silverstone. Without any practice, qualifying well was practically an impossible task. Hulkenberg performed well though, finishing up 1.7 seconds away from the fastest time in Q1 and just 0.9 away from what Sergio Perez managed. He will line up at the very back, but completed the basic task required of setting a time within 107% of pole and will be allowed to take part in the race.

With Racing Point introducing aero updates over the last two races, Hulkenberg noticed the difference and said:  “The car has moved on too, a couple of technical bits that are very different and give the driver a very different sensation. So I have to adjust around that a bit and just find my feet again.”

“Obviously in four laps that is not so easy. But all in all even though we’re last and quite pleased with the laps that we produced just now.”

Hulkenberg said tomorrow’s race will be “very difficult and a hell of challenge” given his lack of recent experience.

“But we’ll do what we can. Obviously I’ve got the experience the four laps in the pocket now those will sink in and tomorrow we’ll just go race and see what we get.”

As for the illness that has struck Lance Stroll, team boss Otmar Szafnauer said that the COVID tests have come back as negative so far.

“He hasn’t been feeling great since Russia,” Szafnauer explained. “I think he had a bit of a cold. At first we thought, ‘Well you had better get tested for the virus.’ We’ve tested him multiple times, including the pre-event test for this race. And he’s come back negative three or four times. He doesn’t have the classic COVID-19 symptoms, he just doesn’t feel well in himself.

“And last night he had a bit of an upset stomach. So he was on the toilet the whole time. And he said, ‘I’ve got rid of a lot of fluid, and I can’t get off the toilet for long enough to get in the race car.’ I don’t know if it’s something he ate, or if it’s a tummy bug. He just said, ‘I’m just not feeling up to it. We’re going to have a double header coming up soon. And I’d rather rest and get ready for that.’

“We were hoping that he was going to get better. He had kind of flu-like symptoms. Just not well in himself, and couldn’t exercise, and so now that, with whatever he ate or a tummy bug together, he said, ‘I can’t do it.’ We’ve got a doctor looking after him and when he’s fit to leave, he’ll go home.”

Szafnauer explained that they left it late to call in Nico Hulkenberg, as Stroll left it as late as possible before deciding he wasn’t well enough to take part.

“He was hoping that he could get off the toilet and come in. But it was 30 minutes before FP3. Otherwise, yesterday, we would have called Hulkenberg a day earlier, and he would have done FP3.”