Ilott, Schwartzman and Ticktum all named for Macau

Bottas ‘planned on sleeping’ towards the end of Austrian GP

Ilott, Schwartzman and Ticktum all named for Macau

A host of big names, including Dan Ticktum, Calum Ilott and Rob Schwartzman are all confirmed for next month’s Macau Grand Prix.

The FIA has released the list of confirmed entries so far for this year’s F3 World Cup in Macau. The famous race will field a capacity grid of thirty cars, all of the current Formula 3 specification.

Defending Macau champion Dan Ticktum may have had a turbulent year after being dropped from the Red Bull programme, but he’ll be racing with Carlin this year alongside Felipe Drugovich and Logan Sergeant.

“I wasn’t sure if I’d have the chance to return to Macau again and so to be able to come back with Carlin this year is very exciting,” said Ticktum.

“Macau is the most incredible circuit and obviously I’ve been a race winner there in the past so that is obviously the aim again this year.

“It’s a really exciting challenge for me driving the new FIA F3 car for the first time in Macau, but hopefully I can get to grips with that and the Pirelli rubber quickly.”

Prema will field Robert Schwartzman, winner of the Formala 3 Championship this season, as well as Marcus Armstrong and Jehan Daruvala. Sauber Team by Charouz, entering Macau for the first time, will put Callum Ilott in one of their cars, despite him having moved up to Formula 2 full-time this season. They will also be fielding Enzo Fittipaldi, grandson of F1 Champion Emerson, along with David Schumacher – son of Ralf.

ART have also revealed they’ll be taking part in Macau, and will race Ferdinand Habsburg, as well as Christian Lundgaard and Sebastian Fernandez.

Sophia Floersch, who survived a horrifying and worldwide headline grabbing crash at Macau last year, is not confirmed as taking part as her 2018 team Van Amersfoort pulled out of the new Formula 3 before 2019. Also not named is Mick Schumacher – the 2018 F3 Champion. He took part last year, but stepped up to Formula 2 with Prema this season and thus is unlikely to find a seat elsewhere.

The full confirmed line-up so far is below: 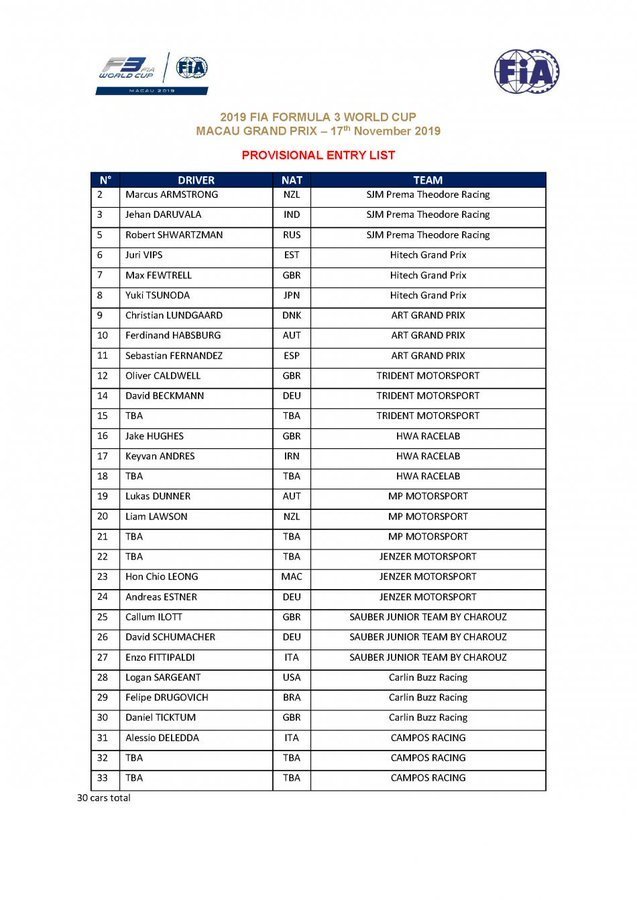