Lando Norris: Being teammates with Sainz was ‘a pleasure’

Pirelli’s initial test of the new 18 inch tyres, due for introduction in 2021, has concluded at Paul Ricard in France.

Pirelli conducted a two day test of the new 18 inch tyres at Paul Ricard in France over September 12th and 13th. The two day test saw the Renault team supply a mule car, fitted with 18 inch rims and prototype rubber, for Russia’s Sergey Sirotkin to carry out the test on Pirelli’s behalf. Simultaneously, Mercedes carried out a test of 13 inch compounds for 2020 with Esteban Ocon driving the W10.

Outside of prototypes for demonstration purposes, it’s the first time 18 inch tyres have been run on a contemporary Formula 1 car as the sport moves towards the change for 2021. While Formula 2 makes the switch for 2020, F1 has delayed it a year in order to allow for greater information gathering in light of the huge engineering challenges behind the switch.

There were no problems over the two days, with Sirotkin racking up 213 laps in the mule Renault. Pirelli boss Mario Isola says they’re very happy with how the first run on the tyres has gone: “We were delighted to open up a brand new chapter at Paul Ricard, with the debut for our 18-inch tyres – which will change the face of Formula 1 – taking place alongside our latest development test for next year’s 13-inch tyres.”

“Renault provided a 2018 mule car for the 18-inch test, with Sergey Sirotkin driving to mark this historic moment. We completed our planned programme as expected, covering 213 laps with the 18-inch tyres over two days. This was very useful for us to take a first look at the new generation of tyres and start shaping the development path that we will follow for the remainder of this year and next year.”

“Of course, it is hard to read too much into this test as these are still very early days, but we have accumulated all the preliminary data that we wanted in good weather conditions, so thank you very much to Renault and to Sergey for their availability. With the 13-inch 2020 tyres, we covered 212 laps over the two days thanks to Esteban Ocon and Mercedes. The work consisted of assessing a range of prototype slick tyres, as we begin to finalise next year’s specification: the last season of 13-inch tyres before we move on to 18 inches in 2021.”

“We worked with both new and used rubber, tried different configurations and tyre designs. On the first day, the tests were of medium duration, and on the second we switched to a race simulation with a lot of laps in one session. These tests were carried out to refine the data and future work on the tyres and the car, which will appear in 2021,and the information gathered is confidential. Such tests are extremely rare, so it’s especially nice that the Renault team invited me to these Pirelli tests.”

McLaren and Mercedes will also conduct 18 inch tyre tests between now and the end of the year, with the plan being that these will be also be two day dry tyre tests at Paul Ricard. In 2020, the entire F1 field will have the option to take part in these tests over the course of the year, provided they can supply a mule car capable of running the bigger wheels. 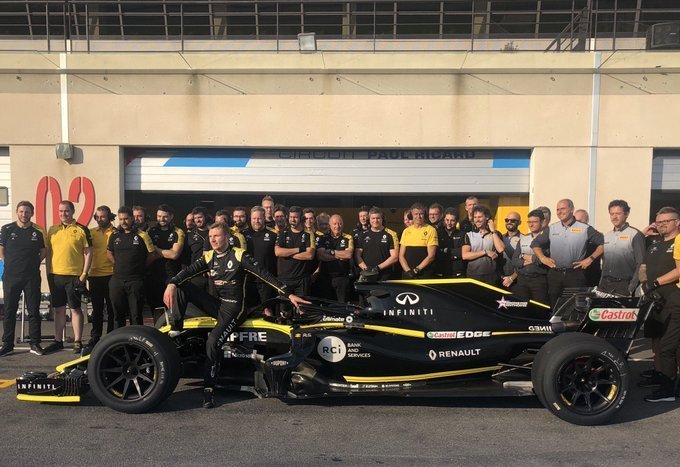