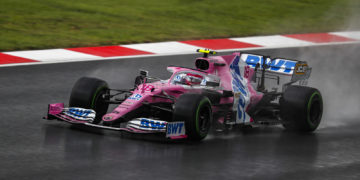 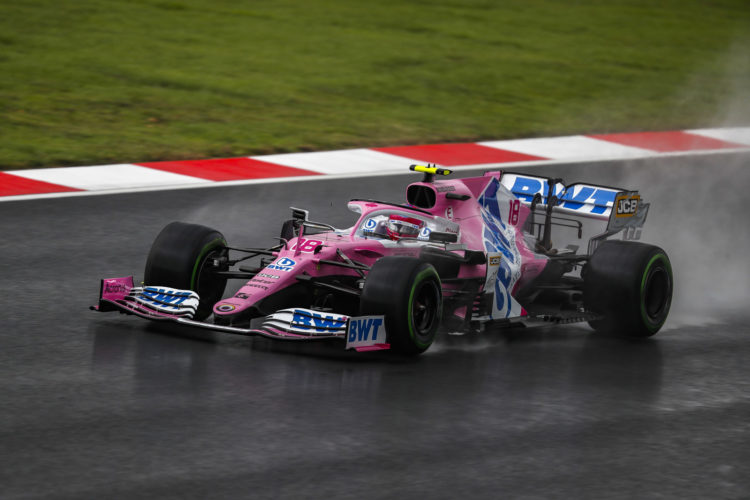 Click here for the complete results from the 2020 Turkish Grand Prix Qualifying session.

Lance Stroll has weathered the conditions at a very wet Istanbul Park to take his first ever pole position, and the first pole position for the Silverstone-based team since their 2009 Spa pole with Giancarlo Fisichella when the team were Force India.

The session was a complete deluge of rain, with Q1 taking over an hour to take place as race control opted to try waiting out the rain. As a result, Q2 and Q3 were very much a case of staying on track and trying to maintain tyre temperature. Added to the confusion was the fact that the circuit appeared to be right on the knife’s edge of being suitable for both Intermediates and full Wet tyres, with personal preference seeming to be the only differentiator.

Having made it through into Q3, Stroll put in a late 1:47.765 on the Intermediate tyre to snatch away provisional pole position. This time proved unbeatable as Max Verstappen fell two tenths short with his last run – the Dutch driver having done his best with the full Wet tyre after being unhappy with the grip on the Intermediates. The front pair eclipsed the best time set by Sergio Perez, who had vaulted to the top in the final minute with a 1:49.3 also on the Intermediates. Perez made an error on his final run, and wasn’t able to improve further from there.

Alex Albon also did well in the tricky conditions as he launched himself into P4 late in Q3, with Daniel Ricciardo placing in P5 for Renault.

Lewis Hamilton could only manage P6 for Mercedes, having never looked capable of challenging for the top spots throughout the session. Esteban Ocon was P7 for Renault, while Kimi Raikkonen finished in P8 as both Alfa drivers enjoyed the wet weather to make it into Q3. Antonio Giovinazzi finished in P10, with Mercedes’ Valtteri Bottas in P9 after spinning off on his final flying lap.

Lando Norris will start from P11 for McLaren, while Sebastian Vettel outqualified his teammate for the first time in nine races by taking P12 for Ferrari. Carlos Sainz was P13 for McLaren, with Charles Leclerc down in P14 in the second Ferrari.

Pierre Gasly finished P15 for Alpha Tauri, at the bottom of the standings at the end of Q2.

Knocked out in the first part of qualifying, and making up the bottom five are Kevin Magnussen for Haas in P16, with Daniil Kvyat in P17 for Alpha Tauri. George Russell was P18 for Williams, Romain Grosjean P19 for Haas, and Nicholas Latifi P20 for Williams.

However, the stewards have indicated that there will be investigations of several drivers after qualifying due to yellow flags being on track when several drivers improved right at the end of Q1.