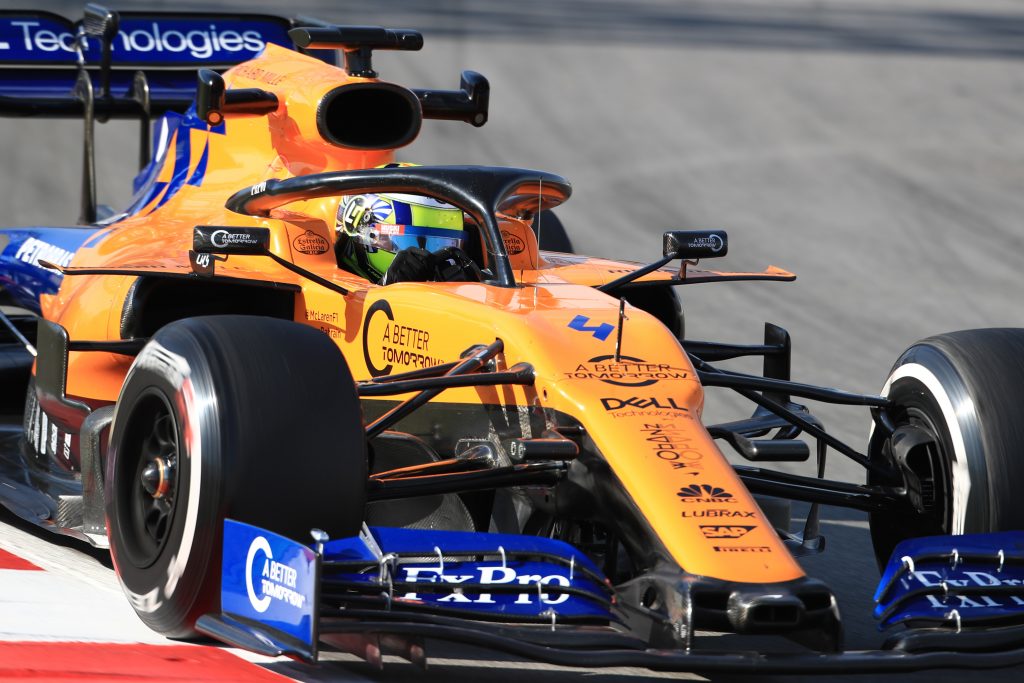 Lando Norris fastest as McLaren up their pace – Test Two, Day One (PM)

Lando Norris fastest as McLaren up their pace – Test Two, Day One (PM)

McLaren’s Lando Norris has ended the first day of the second pre-season test as fastest man. The British driver bolted on a set of C4 tyres with half an hour remaining to snatch the spot away from Red Bull’s Pierre Gasly.

Lando Norris has ended the first day back from the short break between the two pre-season tests by going fastest for McLaren. After a morning breakdown, linked to the car’s hydraulic systems, Norris came back out in the afternoon to place in the midfield throughout the day. However, a late glory run on the softer C4 tyre saw him pop in a 1:17.7 to go quickest. Shortly after, the McLaren pulled over and stopped again at Turn 3, requiring a red flag period to recover the stricken McLaren.

This displaced Pierre Gasly down to P2 after Red Bull finally started to show some of their pace. It was a quiet first test for the team but Gasly used the C3 tyre to put in a 1:17.715 during the afternoon and spent most of the afternoon at the top of the times before Norris’ late lap. He put in 136 laps of the track.

Racing Point were another team to show some promise after a quiet first test as Lance Stroll used the C5 tyre to put in a 1:17.824 during the afternoon. This was enough to place the Canadian P3 after completing 82 laps of the track.

Ferrari’s Sebastian Vettel finished P4 after taking over the SF90 from Charles Leclerc, who drove the car during the morning session. Vettel used the C3 tyre and put in a 1:17.925. However, it wasn’t all plain sailing for Ferrari as they lost half of the morning session due to issues they explained as ‘checking a few things’.

Alfa Romeo’s Antonio Giovinazzi was P5, putting in almost 100 laps of the circuit en route to a best time of 1:18.589 on the C3 tyre. This was enough to finish ahead of Toro Rosso’s Alex Albon. After the highs of the team finishing fastest on Day 3 last week, Albon’s best time of 1:18.649 placed him P6 after the first day of this test.

This was a tenth clear of Charles Leclerc’s best time from the morning, which was enough to keep the Monegasque driver in P7.

Haas seemed to have gotten on top of their electrical gremlins that plagued them throughout the first test, as Kevin Magnussen put in a trouble-free 119 laps to go P8. His best time of 1:18.769 was set on the C3 tyre.

On a brighter day for Williams after their troubled week at the last test, George Russell showed that the FW42 has some potential by clocking a lap under the 1:20 barrier for the first time. He put in a 1:19.662 and over 100 laps and finished P9 on the timing screens.

This kept him ahead of Renault’s Daniel Ricciardo on a quieter day for the French marque. After finishing P1 & P3 with Hulkenberg & Ricciardo respectively on Thursday last, Ricciardo placed P10 today with 54 laps tallied. He drove the afternoon session after taking over from Hulkenberg in the morning.

It wasn’t a smooth day for Mercedes. As Hamilton handed over the W10 to Bottas at lunchtime, the Finn broke down on his outlap. Stopped at Turn 3, he clambered out as the car was recovered. Mercedes then sat out almost the entirety of the afternoon as a power unit change was required on the W10. Bottas emerged with five minutes remaining and put in a handful of laps and improved his position to P11 right at the end of the session.

The reigning Champion only drove the morning session, putting in 83 laps with a best time of 1:20.332. He ended the day P12, just ahead of Nico Hulkenberg’s Renault.