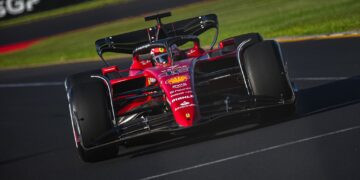 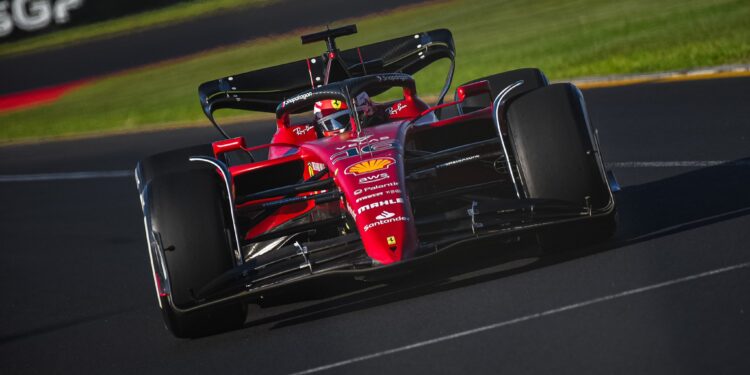 Australian Grand Prix – Charles Leclerc took a pole to lights victory in Melbourne while an issue for Max Verstappen saw him retire.

After his clash with Nicholas Latifi during qualifying, Lance Stroll, who hadn’t set a lap time and was already set to start at the back, was given a three place grid drop along with a couple of penalty points for his licence. Despite that, the Aston Martin racer will be starting today’s race in P19 after Alexander Albon had all his qualifying times stripped when there wasn’t enough fuel left in his Williams for the required 1 litre sample to be taken.

The medium tyre was the choice of the majority of the grid for the start, the exceptions to that were Carlos Sainz P9, Fernando Alonso P10, Kevin Magnussen P16, Sebastian Vettel P17, Lance Stroll P19, and Alexander Albon P20, who all had the hards compound on.

As the lights went out for the first Australian Grand Prix since 2019, it was an ideal start for polesitter Charles Leclerc, who held station at the front and pulled out over half a second on Max Verstappen over the first lap. Behind the top two,it was Lewis Hamilton, the Mercedes driver moving up from P5 while the big losers of the top 10 were Lando Norris, who got swamped and fell from P4 to P6, and Sainz who dropped to P14.

It went from bad to worse for the Spaniard however, as on lap 2 he braked too late for T9, running across the grass and spinning into the gravel on the outside of T10, beaching his Ferrari, ending his race and leading to a brief Virtual Safety Car before the real Safety Car was deployed.

The race was back on at the end of lap 6, but there were no position changes as it did. Over the next couple of laps, before the DRS was enabled, Leclerc had managed to pull over a seconds gap over the second placed Red Bull. The leading two had dropped third placed Hamilton, though the Mercedes had Sergio Perez all over his rear wing and it wasn’t long before the Mexican had regained his position,

By lap 12 Verstappen was four seconds behind the leader, with the gap only widening, and was struggling with his tyres. The Dutchman telling his team “my left front is completely grained”.

Magnussen was setting himself up for a pass on Zhou Guanyu for P13, but the Haas driver almost copied Sainz, going over the grass but managed to keep it on the tarmac on the other side rather than continuing into the gravel trap.

Lap 19 saw Verstappen as the first of the front runners to head to the pitlane, the Dutchman rejoined in P7, just ahead of the squabbling pair of Pierre Gasly and Alonso. The Alpine got past the AlphaTauri but wasn’t able to bother the Red Bull.

The other Red Bull, Perez in P2, was however being put under pressure at that point as Hamilton had closed up and was all over the rear of the Mexican, who pitted before the Mercedes could try overtake and rejoined the pack in P9.

The race leader made his trip to the pits on lap 22, Hamilton following him in and while Leclerc emerged still in the lead, just less than a second ahead of George Russell, still to pit, while Hamilton came back out in P5.

There was another addition to the hefty Aston Martin repair bill for the weekend then as Vettel lost the rear of his car on the kerbing, spun and hit the wall. That called the Safety Car out once again which worked out very nicely for Russell who made his stop and emerged back out in P3.

There was a very close call behind the Safety Car for Mick Schumacher as Yuki Tsunoda almost came to a complete stop ahead of him, the German radioing his team saying: “holy cow, that was close!” The stewards will investigate the incident after the race.

The track was back to green on lap 27, this time though it was nowhere near as good a restart as the first one was, Leclerc having Verstappen all over the back of him but was just able to hold onto his position.

The battle for P7 was where most of the action was just over halfway through the race, Magnussen was doing his best to hold off the two McLarens behind him, but the Dane, who hadn’t pitted yet, couldn’t hold off forever and Norris the make his move before a couple of laps later Daniel Ricciardo breezed past the Haas on the start/finish straight.

Lap 39 saw Verstappen told to “stop the car” and the reigning champion pulled his Red Bull off the track just after T2. He told his team he could “smell some weird fluid” and fire extinguishers were required when the car stopped. That meant Perez moved to P2 while the Mercedes cars of Russell and Hamilton were into P3 and P4. The Mexican was told not to worry about his teammate’s issue as it wasn’t relevant for his car.

Stroll, in P9, was handed a five second penalty for weaving on the straight when he was defending from Valtteri Bottas, but the Canadian will avoid heading to the stewards for squeezing the Alfa Romeo driver off the track, which allowed both the Aston Martin and Gasly to get past, as the stewards decided the incident didn’t need to be looked into. A few laps later though and both Gasly and Bottas had made it past the Canadian, demoting him to P11.

With a 20 second gap to his nearest rival, Leclerc was asking Ferrari if he could go for the fastest lap. The Monegasque was told he wasn’t allowed to go for it again as he already had the fastest lap and it didn’t look like anyone was on track to beat it. Leclerc accepted that, but sounded very disappointed to hear that.

Hamilton was also sending messages to his team, his “you guys put me in a really difficult position” was quite strange as it was Vettel’s accident and subsequent Safety Car which allowed Russell to be ahead of his teammate and in the final podium position.

It was very close between the two McLarens at the end, but it was Norris who took P5, just over 0.4 seconds ahead of his Australian teammate. Esteban Ocon took Alpine’s only points of the day in P7, Bottas was P8 ahead of Gasly and it was Albon, who had started last on the grid who took the final point. The Williams driver had an incredible race on one set of tyres, only heading to the pits for the required stop on the very last lap.