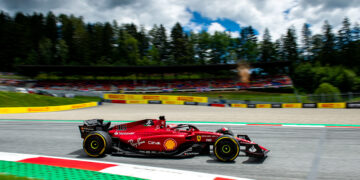 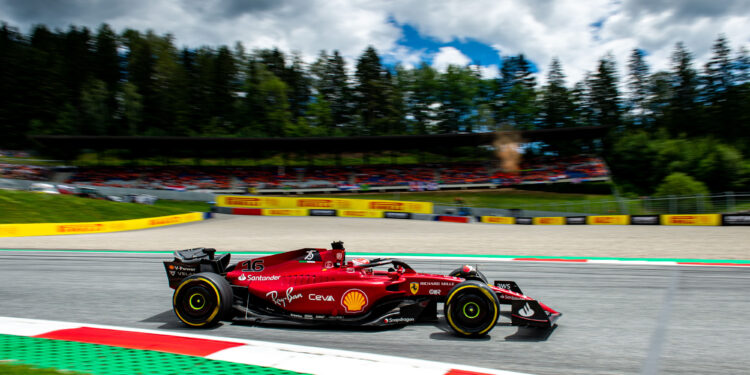 Austrian Grand Prix – Charles Leclerc had the pace over Max Verstappen, passing him multiple times, while Carlos Sainz blew up as he was going for a 1-2.

After finishing P10 in yesterday’s Sprint, Valtteri Bottas’ turbo charger and MGU-H were changed which bagged him a ten place penalty but Alfa Romeo also swapped part of his rear wing assembly for a newer spec part so there will be 19 cars on the grid as the Finn must now start from the pit lane.

The last car on track will be Fernando Alonso, who failed to start the Sprint yesterday due to a suspected electrical issue, Alpine later changed a raft of parts on his car (ICE, MGU-H, turbo charger, energy store, and control electronics) but the required back of grid start for all of that won’t make any difference to him.

The other Alpine also had a problem yesterday but luckily for Esteban Ocon he was able to make it past the chequered flag before his car stopped on track also with a suspected electrical issue, those his was on the high-pressure fuel pump. The team were able to replace the part without dropping Ocon from P6.

It wasn’t the smoothest of race preps for Lewis Hamilton whose Mercedes had to undergo some last minute work to bleed the brakes after Hamilton said the pedal felt a little long on his lap to the grid.

The top four were in the same positions as yesterday though George Russell in P4 will have Sergio Perez, who raced from P13 to P5 in the Sprint, looking to get past him at the start to even up the Red Bull/Ferrari battle at the front.

The medium compound tyre were the majority choice for the grid, however Zhou Guanyu P13, Yuki Tsunoda P16, Sebastian Vettel P18 and Fernando Alonso P19 decided that the hards were the better choice for the first portion of the Grand Prix.

There was no drama on the formation lap today and so the lights went out when scheduled but as with the Sprint, Verstappen was able to hold the lead and this time Carlos Sainz had to battle with Russell to hold his P3 instead of competing with his teammate ahead.

While the Ferraris held the podium positions Russell’s attention then turned to Perez who was aiming to move into P4 but the two touched the Red Bull was sent spinning into the gravel and while he was able to avoid being beached, he ended almost a lap behind after limping back to the pits for new tyres.

Four laps in and the top three had pulled ahead, Leclerc within a second of Verstappen while Sainz trailed the two by a couple of seconds. There was a big gap back to Russell who was leading one of two DRS trains. His with Hamilton in P8 at the rear, the seven-time champion’s battle with Mick Schumacher from the Sprint yesterday having been resumed with the Haas racer having made it to P7 after a mistake from the Brit.

Lap 10 saw Leclerc make a first attempt on the lead with a lunge at T3 and then continue the fight at the following one but the reigning champion was able to hold on. Two laps later though and another lunge at T4 saw the Ferrari into P1. The following lap Verstappen ducked into the pits to put on the hard compound and he rejoined in P8.

While that was happening Russell was handed a 5 second penalty for his earlier incident with Perez and took the time penalty before swapping to the hards and an undamaged front wing.

With most of the cars ahead also heading to the pits, Verstappen found himself back in P3, only 20 seconds behind Leclerc, on lap 19 after passing Hamilton on track.

Lap 24 saw a five car battle over P8. Firstly there was a three-wide battle with Zhou, Alonso and Magnussen, the Haas driver jumping up two places with that while then Schumacher and Lando Norris got involved and the places continued changing with some incredible close battles though it was Alonso who lost out most, falling to P11 while Zhou bailed into the pits.

The end of lap 26 saw Leclerc head to the pits with Sainz taking his stop the following lap. The Ferrari racer rejoined in P2 just over five seconds behind Verstappen, while Sainz was P4 for a lap before Hamilton ducked into the pits. While Ferrari had smooth stops, there was an issue with the front right for Hamilton and that was enough to allow Ocon slip past and force the Mercedes driver to have to overtake just over a lap later.

The pace was certainly with the Ferraris, especially Leclerc, during the Grand Prix and the Monegasque had closed the gap and made a very easy pass on Verstappen, who was having issues with inconsistent grip on his hard tyres, to retake the lead on lap 33.

The Stewards seemed to be fond of the 5 second penalty in Austria, after Russell’s earlier, with both Pierre Gasly and Norris being handed them for exceeding track limits too many times.

Ferrari moved into a 1-2 on lap 37 when Verstappen took to the pits again for fresh hards and fell to the final podium position, 25 seconds off Leclerc. As he rejoined, Red Bull recommended he match Hamilton’s time rather than push to close up with the Ferraris.

There was a clash between Gasly and Vettel on lap 40, as the Aston Martin tried to move ahead for P12. Vettel was sent into the gravel but was able to continue while Gasly was then handed another 5 second penalty.

Lap 50 saw the leader into the pits, Leclerc rejoining three seconds behind Verstappen as the Red Bull driver became the leader at the end of that lap when Sainz continued to follow the same tyre strategy as Leclerc and take his own second stop.

Lap 53 saw Leclerc make a third pass on Verstappen for the lead, and a few laps later, just as Sainz was right behind the Red Bull and about to put Ferrari into a 1-2 again then smoke started pouring out the back of his F1-75. The distraught Spaniard pulled into the runoff but as it was on a hill, Sainz had to remain in his flaming Ferrari for much longer than ideal as he needed to keep his foot on the brake to stop the car rolling back onto the track until a marshal put a chock behind his wheel.

The Virtual Safety Car was called to cover that incident and Leclerc and Verstappen took the time to pit and swap to medium tyres for the final few laps. The race was back to green on lap 60 and it was then a battle for fastest laps between the top two as Verstappen tried to reel the Ferrari, and the race win, back in.

There were a few moments of worry for Leclerc as he reported his throttle pedal felt strange but a few minutes later the team confirmed the data was fine while all was good again in the cockpit too. The drama however wasn’t over as Leclerc was then once again on the radio asking what was happening with his throttle pedal, the team then decided that it was just the pedal getting stuck at times and not resetting to zero percent as it should.

Leclerc had to continue to deal with the throttle pedal issues and issues with his downshifts as the car wouldn’t shift down while the throttle was still engaged. Despite that, he managed to hold a gap to Verstappen and take the chequered flag first in Austria.

Verstappen took P2, just a second a half behind the Ferrari but with the point for fastest lap while Hamilton took a third P3 in a row, the Mercedes ending his race 41 second after Leclerc. Russell continued his run of only finishing in the top five, with another P4.

Ocon in P5 was the last driver on the same lap as the leaders while after his first F1 points last time out in Silverstone, Schumacher came home as the lead Haas in his highest ever position, P6.

Norris took P7 for McLaren with Magnussen giving Haas another double points finish with a P8 while Daniel Ricciardo gave McLaren their third of the year with a P9. The final point went to Alonso after he got past both Albon and Bottas in the final few laps. The Alpine racer is however under investigation for being released from the pits in an unsafe condition.