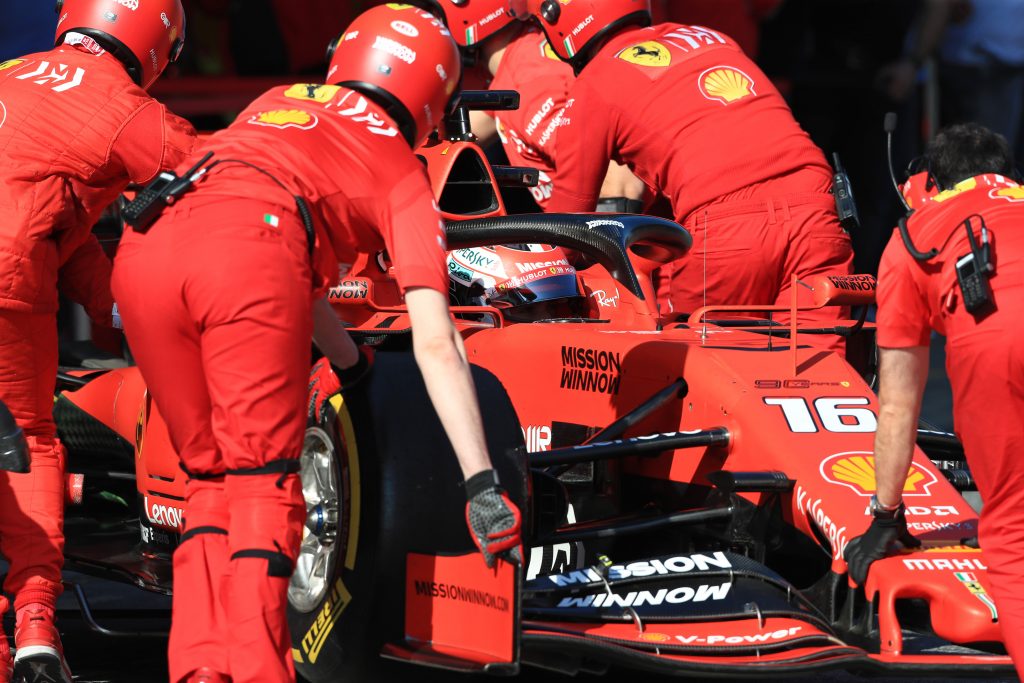 Ferrari’s Charles Leclerc has finished the penultimate day of pre-season testing as the quickest driver. This was despite him breaking down on track with twenty minutes of the day remaining.

Leclerc set the pace of the day and for testing overall by putting in a 1:16.231 during the morning session. This time was set on the C5 tyre but the indications are that the Ferrari is capable of more as he also did a 1:17.2 on the C2 tyre – the adjusted tyre delta would indicate a laptime below 1:16 is possible for Ferrari.

After the trials of Wednesday with Sebastian Vettel’s crash, the team confirmed the issue as being a rim failure on the SF90. With their worries assuaged for Thursday, Leclerc came out on track around 9.30 and had a straightforward day where he racked up 138 laps. This was until twenty minutes remained in the day and he suffered a breakdown on the back straight, triggering a late red flag.

There was an extended red flag period earlier in the afternoon, too, as Pierre Gasly crashed his Red Bull for the second time during pre-season testing. Losing the rear of his RB15 on entry to Turn 9, he made heavy impact with the barriers. Thankfully, he was unhurt, but the car was badly damaged and Red Bull took no further part, losing about two and a half hours as a results. Gasly’s best time was enough to place him P4 with 1:17.0, set on the C5 tyre during the morning session.

Alex Albon was P2 for Toro Rosso, putting in a 1:16.8 on the C5 tyre during the morning. He was another driver to manage over 100 laps over the day. His time was just over a tenth clear of Lando Norris in P3 as the McLaren driver used the C5 tyre to put in a 1:17.0. McLaren managed 82 laps.

Lance Stroll was P7 on another respectable day for Racing Point. His best time was 1:17.556 on the C5 tyre, but he was one of the drivers to bring out the red flags during the day as he broke down on the back straight with just over an hour remaining in the day. He didn’t come back out.

Antonio Giovinazzi was P8 for Alfa Romeo, putting up 71 laps and a best time of 1:17.639 on the C5 tyre. This kept him ahead of Romain Grosjean’s Haas, who vaulted up the timing screens right at the end of the day as the session went green for five minutes after Vettel’s breakdown. Grosjean had missed out on most of the afternoon after taking over from Kevin Magnussen, due to an exhaust issue on the Haas.

Lewis Hamilton was P10 for Mercedes but his time of 1:18.0 was notable as it was set on the hard C2 tyre, suggesting Merc have the pace to challenge outright for the fastest time once they use the C5 tyre. He did 85 laps over the day after taking over from Valtteri Bottas, who drove the morning session. The Finn’s best time was 1:18.8 with 94 laps done.

George Russell capped off a good day for Williams as they found pace and reliability. The FW42 went around the track 140 times, more than anybody else, as Russell brought down Williams’ fastest time of testing to 1:18.130 on the C5 tyre.