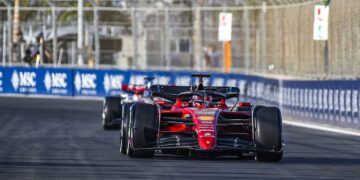 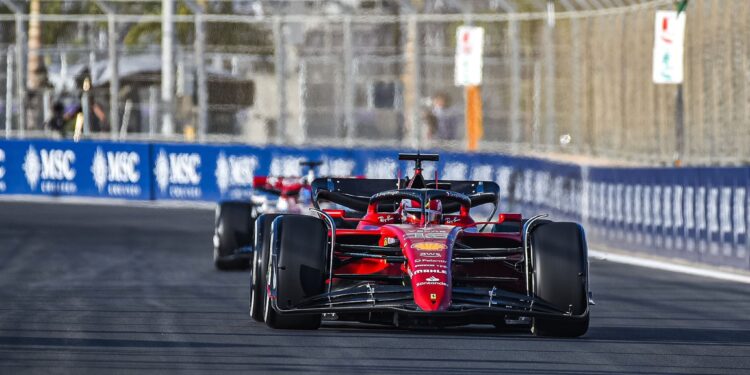 Only four months after taking to the streets of Jeddah for the first time, the Formula 1 circus is back in Saudi Arabia for another go on the slightly altered in places, to hopefully improve visibility, Jeddah Corniche Circuit.

Fernando Alonso was the first out into the very sandy pit lane and onto the track in his pink Alpine. It wasn’t only the pitlane that had a good sprinkling of sand, if any car went off the racing line or especially onto the run-off, they would throw a lot of sand up behind them.

The fastest times dropped rapidly in the opening few minutes of the session, from Yuki Tsunoda, one of the first on the board with a 1:36, to Max Verstappen’s second quick lap which dropped the time to a 1:31.885 just before ten minutes had passed.

There were early problems for Haas’ Kevin Magnussen, the Dane was one of the stand-outs at last weekend’s season opener, but he was only out for a lap when he received a message from his team telling him to return to the pit lane slowly and not to shift gears. The team then revealed that it was a hydraulic leak and that they would most likely need to change his radiator.

After seventeen minutes of track time the session was red flagged to allow marshals to clear up some debris on track. Daniel Ricciardo had radioed in to report that the 50 metre braking marker board at the first corner had come loose and would likely fall onto track, the board did just that and it was Ricciardo’s McLaren teammate, Lando Norris, who turned the fallen board into confetti although he initially thought he’d hit the wall.

At that point Verstappen had shaved even more time off his quickest time of the day with a 1:30.888, while neither Ferrari had even left the pitlane. After ten minutes to sweep up the debris, the circuit was back to green and the Ferraris made their first on-track appearance of the day.

The session got very quiet before the fifteen minute mark with Lance Stroll and Mick Schumacher having the track to themselves for a few minutes before being joined by the rest, aside from Magnussen, for their final few runs.

Charles Leclerc had an amusing moment near the end of the session where he forgot the garage order in the pitlane, thinking that Ferrari were further down than they actually are, so he had to pull in at McLaren, the next team down, and be pushed back by his mechanics.

Porpoising was still an issue, with Lewis Hamilton and Carlos Sainz complaining about bouncing while footage of the Ferrari saw the Spaniard being shook around as much as a shopping trolley would be over cobblestones.

Despite that, porpoising didn’t manage to hold Leclerc back as he knocked Verstappen off the top of the timesheet with a late 1:30.772. Bottas started his second weekend with Alfa Romeo off well finishing in P3, just ahead of Sainz.

The two AlphaTauri’s were P5 and P6, with Pierre Gasly a couple of tenths quicker than Tsunoda, while Sergio Perez in P7, was the last to be within a second of the Ferrari’s time at 0.791 seconds slower.

Alpine ended P8 and P10, with Esteban Ocon finishing ahead of Alonso while the two were split by Hamilton, the Mercedes driver over 1.5 seconds slower than Leclerc.

Magnussen did not make it back out during the session and ended without a time on the board.