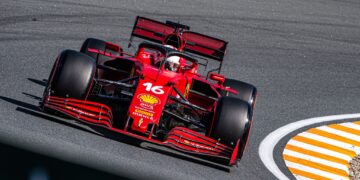 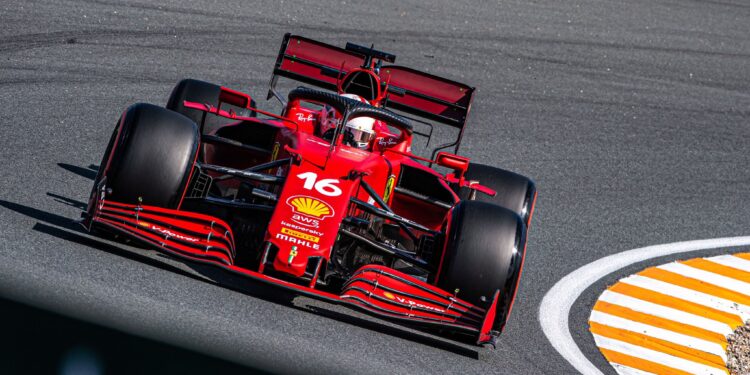 Dutch Grand Prix – Charles Leclerc led a Ferrari 1-2 in another red flag disrupted session while Hamilton stopped on track only a few minutes in.

After less than half a session of track time in the opening practice session, the drivers had to wait an extra five minutes to get on track as Race Control briefly delayed the start of second practice as, according to the BBC commentary, a track sweeper had gotten bogged down in a gravel trap and needed the extra time to get free and return to its position.

Once the 60 minutes started ticking down the drivers headed out and it was Valtteri Bottas putting in the best initial time, a 1:11.664, just 0.164 off the best from FP1. Six minutes into the session and the red flag was once again being flown around Zandvoort as the fastest car from the morning, Lewis Hamilton’s Mercedes, slowed on track and was told to stop when he reported a loss of power.

The stricken Mercedes was pushed to safety and Hamilton was heading back to the pits in the medical car but was returned to his W12 to confirm it was turned off before he could rejoin his team. The session resumed with 46 minutes on the clock. Bottas had improved his time to a 1:11.353 before Esteban Ocon put Alpine on top with a 1:11.074 a few minutes later.

At the half hour mark the red flag once more silenced the track as Nikita Mazepin spun into the gravel and beached his Haas at the chicane. The practice got back underway after a six minute pause and it was Charles Leclerc who made the most improvement and was the first driver under the 1:11s, putting in a 1:10.902 with Carlos Sainz slotting into P2 just over a tenth and a half slower.

The teams then focused on long runs so there were no more laps to challenge Leclerc’s hold on the top spot. The two Ferrari’s ended on top with Ocon 0.172 off in P3, while the only Mercedes to see it through to the chequered flag, Bottas, was P4 with a 1:11.132.

Max Verstappen was unable to get a clear lap in, traffic and red flags saw him end P5 with a best of 1:11.264. Fernando Alonso was P6, 0.378 off Leclerc while Pierre Gasly was over half a second off.

Lando Norris was the best of the McLaren’s in P8 with Antonio Giovinazzi and Sebastian Vettel, who caused the half-session red flag in FP1, took the final top ten positions.

Despite only getting one lap in before his car issue, Hamilton’s opening time, a 1:11.911, was good enough to see him P11 over fifty minutes after he left his car.