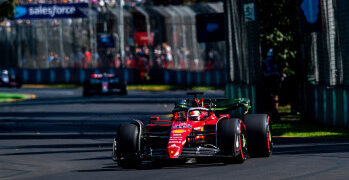 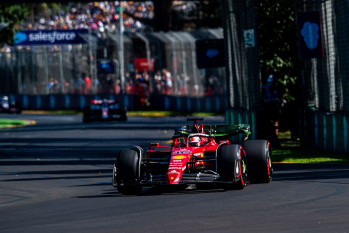 A few spots of rain started to fall as the pit lane opened, but the downpour never arrived, leaving the teams to continue their practice programmes. It was a busy start to the session, with Zhou Guanyu and Lando Norris, Daniel Ricciardo, and George Russell  first out on track.

McLaren’s Daniel Ricciardo first lap of 1:21.793 was set on the soft tyre, teammate Lando Norris slotted into second. Despite a hair raising moment into turn 10, Norris was just a tenth behind his teammate.

Ricciardo was quickly displaced by the two Ferrari’s, Charles Leclerc jumping to the top of the times, followed by teammate Carlos Sainz. The stewards took note of an impeding incident involving Sainz and Aston’s Martin’s Lance Stroll. The stewards stated they would investigate Stroll and Yuki Tsuonda for separate incidents after the session.

We have a feeling Lando's heart-rate may have spiked just now 😅 pic.twitter.com/fhjuUiO5Kd

Alfa Romeo’s Valtteri Bottas continued to enjoy his strong form in practice sessions, jumping to P1 before the two Ferrari’s resumed their places at the top of the sheets.

Reigning world champion Max Verstappen lost his debut lap after going into the fast turn 10 too deep. His first successful run saw him 7th, while Fernando Alonso impressed in the Alpine, his time good enough to remain 4th for a large part of the session.

A lull then appeared over the track, as the teams fitted soft tyres. The Ferrari of Carlos Sainz’s first lap on the softs was compromised by Tsuonda’s AlphaTauri, although damage to his tyres was minimal as he backed off at the start of the lap. Teammate Leclerc on his run was not noticeably faster on the softer tyres, and only went two tenths faster than his medium run to remain at the top of the timesheets. Sainz’s second attempt on the softs was two tenths faster than Leclerc, taking him to P1.

Lando Norris on his soft run once again jumped into the top three, going third fastest, as Bottas took to the grass at turn one.

In the second half of the session, Fernando Alonso lit up the sector times on his soft run, going 0.31s faster than the Ferrari’s to go fastest before being beaten by Sainz and Leclerc. Alonso’s teammate Esteban Ocon slotted in behind his teammate to go fourth, the strong performance no doubt of concern to the midfield.

Mercedes did not feature in the top part of the timings in the first half of the session, both Silver Arrows running down the order. When they ventured out for their soft tyre runs,, it was once again Russell ahead of Hamilton. Russell’s time saw him move to P9, Hamilton to P12, just under a tenth slower than his teammate.

Verstappen’s first lap on the softs was good enough to split the Alpine’s, the Red Bull encountering cars during his lap, and missing the apex of turn 11.

Alfa Romeo, McLaren and AlphaTauri  continued to swap positions in the lower part of the top ten, as Verstappen and Perez improved to P3 and P5 respectively. Verstappen was then set to go fastest, but locked up at the final corner.

With 15 minutes to go, the track became quiet, as the top runners pitted, leaving a few of the midfield drivers out, with no improvements made as the teams shifted focus to race runs.

The only red flag of the session made an appearance after part of Lance Stroll’s AMR22 parted from the chassis, the Canadian dislodging it as he took to the kerbs. The session quickly resumed and race runs continued, with no changes in the times.

A piece of wheel-brow has flown off Lance Stroll's Aston Martin bringing a brief halt to FP2. pic.twitter.com/K0vsQcF01C

As the chequered flag fell, it was current race winners Leclerc and Verstappen that topped the times, Leclerc’s fasted time a 1:18.978, Verstappen 0.245s slower than the Ferrari. Carlos Sainz rounded off the top three.

The Alpine’s showed genuine pace in 4th and 6th, split by the second Red Bull of Sergio Perez. Both McLaren’s like the Alpine’s were in the top ten throughout the session in P8 and P10, split by the AlphaTauri of Pierre Gasly in P9.

Mercedes ended the session 11th and 13th in another understated performance from the reigning constructors champions, behind on both high speed and long race runs.