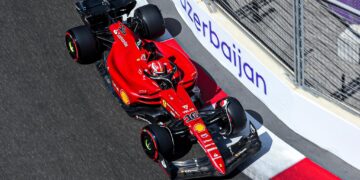 Leclerc fastest in qualifying to take third pole in a row

Leclerc fastest in qualifying to take third pole in a row 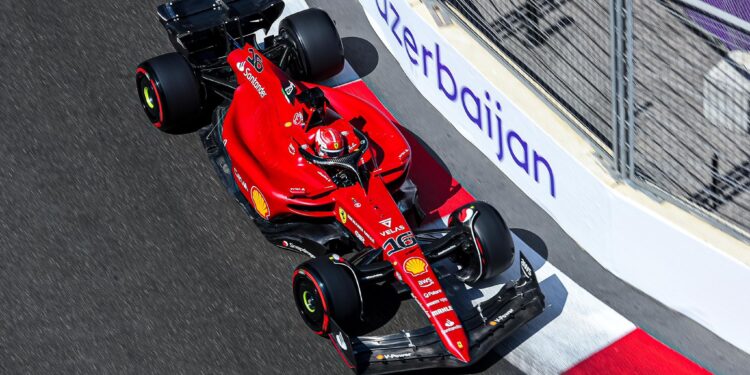 Azerbaijan Grand Prix – Charles Leclerc put Ferrari on pole once again as he beat the Red Bulls in Baku, while Sergio Perez out qualified Max Verstappen.

Qualifying got underway fifteen minutes later than originally scheduled after the final practice session was delayed to allow time for barriers to be repaired following a crash at the end of the Formula 2 sprint race. With the F1 rules prohibiting qualifying from starting less than two hours after the end of FP3 and the third practice running for the full hour, that meant that a quarter past the hour was the earliest that qualifying would be permitted to get underway.

The majority of the cars were queued up in the pit lane waiting to take to the track once the session got the green light, but it was Lando Norris who was at the head of it and put the first time onto the board, a 1:45.061. With all cars out on the track, the leaderboard changed rapidly as they all set their opening times and once they had it was the Red Bulls ahead of the Ferraris with Max Verstappen as the first driver to get into the 1:42s so far this weekend with a 1:42.938.

Two thirds of the way through the first part of qualifying, after the second round of laps, all of the Ferraris and Red Bulls had made it into the 1:42s but it was the reigning champion who still had the best of it, as he got back past Charles Leclerc and Sergio Perez’ efforts.

In the final five minutes Lance Stroll stuck the nose of his Aston Martin into the barriers at T7 but the Canadian was able to reverse out of it, however, the red flag was brought out with 2:30 left on the clock as Stroll and the barriers had another coming together, this time a more terminal side-on collision at the exit of T2, breaking his front right and leaving bodywork scattered over the track.

As the track emptied to allow a recovery vehicle to crane the worse for wear Aston Martin off the circuit while Alex Albon, Valtteri Bottas, Nicholas Latifi, Stroll, and Mick Schumacher were in the elimination spots at that point.

The pit lane traffic jam was back again as the cars lined up with five minutes still to wait while this time it was Mercedes at the front of the queue. The top five – the Red Bulls, Ferraris and Sebastian Vettel, as well as Esteban Ocon in P8, all decided to stick it out in the pits.

Despite not having much time, all drivers on track did manage to make it onto their fast lap before the chequered flag came out and there were a few who managed to improve, the most significant of those being Bottas who made it to P15 and will continue into Q2 at the expense of Haas’ Kevin Magnussen.

While Schumacher was pretty racy on his lap, overtaking cars to try to improve, Fernando Alonso didn’t make any friends with Albon complaining that he was driving too slowly on purpose and then going off the track in a ridiculous manner.

The Williams driver reported that: “He was driving slowly on purpose. It was so obvious how he went off the track. It was ridiculous. He braked so early and then he just went off the circuit.” The yellow flag shown when Alonso went off meant that the cars behind weren’t able to improve.

The second part of qualifying saw the Ferraris have the early advantage over Red Bull this time, Carlos Sainz a tenth faster than his teammate with a 1:42.088. Further back, there was an Aston Martin in the wall again with Vettel locking up and going nose first into the wall at T15. As Stroll did with his first incident in Q1, Vettel reversed out of it without front wing damage though his tyres were flat spotted.

Around the same time Perez had put Red Bull back on top with a 1:41.955, with Leclerc and Verstappen both brushing the walls on their laps. In the final few minutes none of the Red Bulls or Ferraris were on track and while Lewis Hamilton finished the second part of the session in P6, he will be investigated for driving unnecessarily slowly.

Neither of the McLarens made it through to the pole shootout, Norris had been on a better lap but lost the rear of his MCL36 near the end of it and wasn’t able to improve. Ocon and the two Alfa Romeos were the other cars who failed to progress.

Alonso was the first to take to the track for the start of the final portion of qualifying but after the banker laps were set it was once again Ferrari on top, Sainz setting a 1:41.814 as both of the red cars were sliding around on their laps. Leclerc slotted in half a tenth behind his teammate while Perez was 0.126 off the Spaniard while Verstappen was also half a tenth off his teammate’s pace at that point.

With slipstreaming being an important part of how to set the fastest time on the Baku track, Verstappen was left without an assist from his teammate as there was a refuelling issue on Perez’ car and he was stuck in the pit lane for longer than the rest of the drivers. It was a messy lap for Sainz, who wasn’t able to convert the provisional pole to an actual pole, but behind him it was a great lap for Leclerc who put in a 1:41.359 to take pole.

Verstappen had jumped Sainz for P2 but a late flyer from the Perez saw the Monaco Grand Prix winner push his teammate to the second row. Russell was the best of the rest, his Mercedes setting a time 1.353 seconds slower than Leclerc.

Gasly split two Mercedes in P6 with a 1:42.845, while Yuki Tsunoda slotted into P8 behind Hamilton, who does have a stewards investigation along with Norris to deal with for driving unnecessarily slowly, and the fifth row on the grid will see Vettel and Alonso line up together.