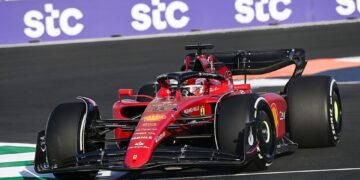 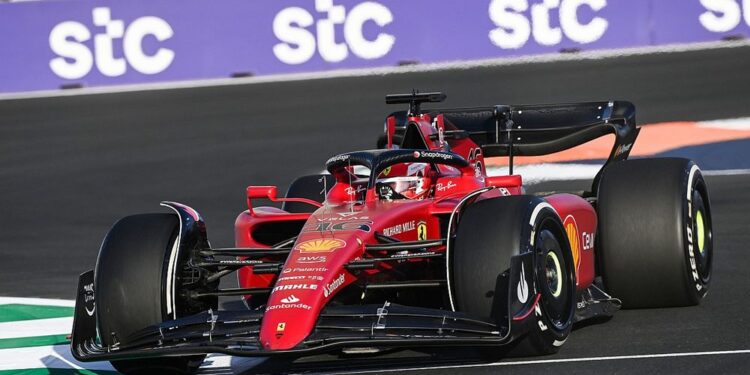 The start of the final practice session had the shadow of yesterday’s missile attack looming large over the circuit as the pit lane opened.  Windy conditions continued to prevail, causing drivers to run wide throughout the final session before qualifying.

In a quiet start to the session, the Alfa Romeo’s were first out for their installation laps along with Kevin Magnussen’s Haas. Magnussen and Haas were hopeful of a more productive session after his reliability woes yesterday.

Norris was next to set a time, McLaren continuing to struggle for pace.  Norris was unable to get within 1.3 seconds of the Ferrari’s, as the lap times continued to drop after twenty minutes.

Mercedes and Red Bull made their first moves after twenty minutes, however Hamilton abandoned his first flying lap after running wide. Teammate Russell was only 9th fastest, as Red Bull’s Sergio Perez jumped to 4th on his first lap, before improving to second place on soft tyres. Teammate Max Verstappen opted for a very slow out lap, setting the 4th fastest time on his first run.

At the halfway mark, AlphaTauri were setting the timesheets alight. Pierre Gasly’s first lap put him into second place, his teammate Yuki Tsunoda’s first time placing him 5th.  Gasly’s session was then brought to an abrupt end, the Frenchman reporting driveshaft issues when attempting a practice start.  Gasly was forced to reverse his stricken car up the pit exit so his mechanics could recover his ATO3 and diagnose the problem.

We did not expect to see Gasly pushing his AlphaTauri back into the pit lane 😅 pic.twitter.com/xtB0jcE2kC

Warm up laps continued to vary, with Verstappen dethroning Leclerc from the top of the timesheets, with a time of 1:29.768 on his fifth flying lap.

In the final twenty minutes Bottas became an unexpected name at the top of the timesheets, jumping to an impressive second place before falling down the order as the qualifying simulations started.

Verstappen then showed Red Bull’s hand in the final ten minutes, on a very fast lap before running wide over the kerbs and being forced to abandon his attempt. Teammate Perez on his second run then went second fastest, 0.65s slower, making it a Red Bull one-two.  Verstappen’s session then ended, the team opting to look over the Dutchman’s car after his high speed excursion.

Verstappen is pushing the Red Bull to it's limits in the final stages of Practice Three 😅 pic.twitter.com/D94l7U9aYF

Both Ferrari’s struggled to maintain speed in the final two sectors when on their runs.  Charles Leclerc went third fastest as the clock counted down, 0.111 seconds away from Verstappen, having set the fastest first sector. Sainz’s best time saw him move to 4th, a tenth slower than his teammate.

Mercedes’s next attempt to get in the top five was also unsuccessful, Hamilton still running a second away from the Red Bull’s.  Russell also struggled, ending up 14th. The bottom seven places were filled by Mercedes powered cars, in another challenging session for Mercedes, McLaren, Aston Martin and Williams.

Leclerc made a last attempt to get to the top of times in the closing seconds. Despite losing time, Leclerc succeeded,  0.33s faster than Verstappen. However Verstappen’s abandoned lap was 0.333 seconds faster in the first sector, leaving questions over which team has the better pace ahead of qualifying.

Haas got their wish for a productive session despite Kevin Magnussen’s reliability problems on Friday, finishing eighth. Bottas also continued his and Alfa Romeo’s strong start to the season, finishing in fifth.