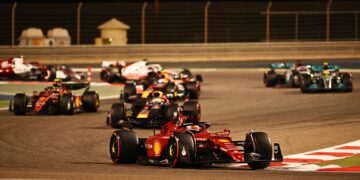 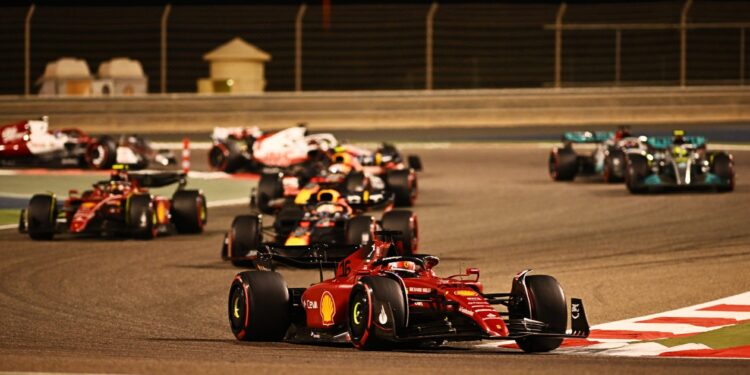 Tension built on the grid at Bahrain built before the start of the new season, the new regulations creating cars that looked  and drove very differently to the 2021 challengers. The race looked to be between Red Bull and Ferrari, and proved to be the case.

At lights out, Leclerc’s Ferrari held the lead going into turn one from Max Verstappen’s Red Bull.  Kevin Magnussen proved he had lost none of his fighting spirit while away from F1 , challenging Hamlton after Perez lost two places, moving up to fifth place.

Further down the order, Ocon’s Alpine received the first race penalty of the season after spinning round Mick Schumacher, awarded a five second time penalty.  Bottas dropped from 6th to  14th, having a bad start.

Ocon sent Schumacher for a spin 🌀

Leclerc out in front, pushed to be out of DRS range, 1.1 seconds clear after 3 laps.  Magnussen then began to slip back on lap 3 following his strong start, locking up and allowing Perez to move up to 6th.   One lap later Magnussen ran deep into turn one again lap later, later allowing Russell through.

On Lap 4, Verstappen complained he was unhappy with engine noise, the team also asking him to undertake brake management.

Battles raged in the midfield in the race’s early stages between Schumacher’s Haas, and the Alfa Romeo’s of Bottas and Zhou.  Zhou passed Schumacher on lap 7, then on  lap 10, Bottas moved to 12th passing Albon at turn 10.   Zhou then passed the Williams on the main straight a lap later.

Perez passed Hamilton for 5th going into turn 4 on lap 10, as the soft tyres began to degrade. Hamilton was the first of the top runners to pit from lap 12, opting for the hard tyres, but lost a place to Zhou after running wide when he rejoined the track, complaining  no grip over the radio.

"For a man who's been Grease Lightning for most of his F1 career that looked like he was driving on grease." 😥

Max Verstappen was the first of the top two to pit on lap 15, Carlos Sainz’s third placed Ferrari  following the Red Bull in. Both fitted another set of soft tyres. Their teammates pitted one lap later, Ferrari opting to bring in Leclerc immediately to counter Verstappen.

When Leclerc rejoined the track after his stop,  the Red Bull had very nearly undercut the Ferrari. The status quo was maintained, but the three second cushion Leclerc had was gone.

Verstappen and Leclerc then had an epic battle for the lead across two laps. Verstappen took the lead on lap 17 using DRS on the pit straight, Lerclerc reacting  immediately by retaking the lead at turn 4. The next lap, Verstappen retook the lead, Leclerc once again moving back to first  at turn 4.  Verstappen then had one final attack on lap 20 at turn one, but locked his tyres, giving the Ferrari a rest-bite from the Red Bull attack. Verstappen had flat spotted his tyres in the attack, placing him out of DRS range.

WHAT A BATTLE BETWEEN LECLERC AND VERSTAPPEN AT THE FRONT!!

Down in the midfield, Mclaren’s trying start to the new season continued, the decision to start on the medium tyres not paying off. Schumacher overtaking Norris, while Ricciardo ran in P19.  Norris had yet to stop, losing a position to Albon on lap 24, dropping to 16th before finally stopping on lap 26, dropping to last place.

Bottas and Tsunoda were locked in a battle for 11th place, the advantage remaining with Tsunoda’s AlphaTauri, until Tsunoda’s second stop.

Degradation continued to be a problem as the race approached half distance,  Alonso pitted for the second time on lap 26, fitting the hard tyres. Verstappen then stated over the radio on lap 28 his tyres were dead, Hamilton stopping and fitting the medium tyres on the same lap.

Verstappen pitted on lap 31, fitting the medium compound tyre. Ferrari bought in race leader Leclerc one lap later, the Ferrari mechanics performing their stop half a second faster than Red Bull. When Leclerc emerged from the pits the Monegasque driver had more of a cushion to defend his lead, the top two now both on the mediums.  Verstappen believed he could have jumped Leclerc at his stop if he had been allowed to push before pitting, angrily stating to his team  he felt he had missed an opportunity.

The pitlane battle resumed for Red Bull and Ferrari on lap 33,  Sainz coming in ahead of Perez. They left in the same formation, Sainz on mediums, Perez on softs.

Magnussen after his pitstop overtook Gasly for tenth on lap 37, Haas continuing to show their promise. Magnussen passed Zhou Guanyu on the next lap, the Chinese driver impressing on his debut.

Leclerc continued to extend his lead over Verstappen, while his teammate had a near miss, lapping the Williams of Alex Albon. Both Red Bulls dropped back from the Ferrari’s they were chasing before attempting to attack again, the Red Bull’s seemingly struggling with their brakes.

Verstappen and Perez then both came in for a third stop on lap 44, both fitting soft tyres. Ferrari reacted with Sainz to counter the Red Bull threat.

Verstappen then came on the radio on lap 45 concerned about an issue with his power steering only to put in the fastest final sector the next lap.  The Red Bull mechanics opted not to box, instead attempting to nurse the issues to the end of the Grand Prix.

Pierre Gasly’s AlphaTauri became the first retirement of 2022, losing all power before catching fire on lap 46. The Safety Car was deployed on track, Leclerc being told to box, with the gaps between the top runners gone as they toured behind the Safety Car.

Pierre Gasly has had to pull to the side of the track with his car overheating and catching fire.

All lapped cars were allowed to un-lap themselves as part of F1’s new regulation changes. The race restarted on lap 50, Leclerc backing up the pack, Lerclerc bolted out of the final corner, leaving Verstappen vulnerable to attack from Sainz’s Ferrari, the Red Bull maintaining second place.

Elsewhere, Mick Schumacher’s chance of points faded, losing tenth place at the restart to Tsuonda, a  further place to Fernando Alonso, and then to Zhou Guangu, dropping to 13th.

DRS was re-enabled on lap 53, with Sainz passing Verstappen. The Dutchman’s race then  ended as his car slowed on lap 55, retiring as his car issues became terminal. This promoted Perez to third, and Hamilton to fourth.

IT'S A FERRARI ONE, TWO!

The second Red Bull then began to complain about power issues as Hamilton chased down Perez. Perez then spun the car as his engine seized up,  giving Red Bull a double retirement, moving Hamilton up to third.

Charles Leclerc then led home a Ferrari one two, the team’s first since 2019. Hamilton salvaged third place for Mercedes, with teammate Russell fourth.

Kevin Magnussen was a brilliant fifth for Haas, galvanising the American team and providing hope for a better season than those of late.  Bottas was a strong seventh for Alfa Romeo, Ocon eigeth, Tsunonda ninth, and Zhou Guangu scored a point on his debut.