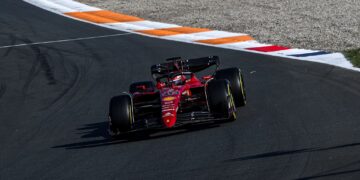 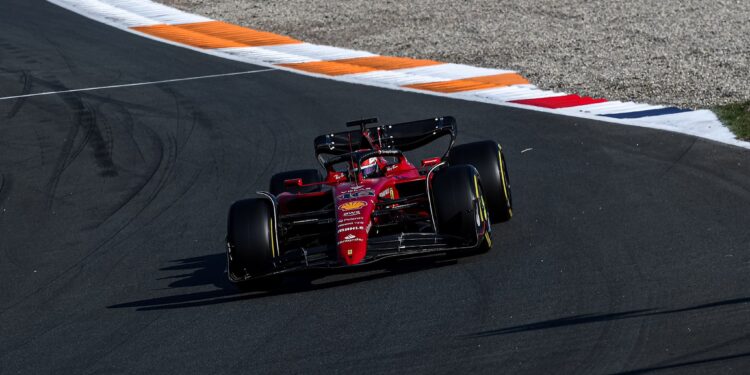 Dutch Grand Prix – It was Ferrari leading the way in FP2 as Charles Leclerc and Carlos Sainz set very similar times to end 1-2 ahead of Lewis Hamilton.

There was a fifteen minute delay to the start of the second practice after the F2 qualifying session ran over thanks to two Red Flag pauses. When the session did get underway, it was once again Lance Stroll who made it out onto the track first.

The Canadian’s 1:14.370 was the first time to come in but, just as in the earlier session, Max Verstappen was into the top spot by the ten minute mark with a 1:13.465. This time however the Dutch driver did not end up stopping on track afterwards.

After fifteen minutes it was Ferrari leading the way with Carlos Sainz posting a 1:13.412, the track went mostly silent then as the majority of cars took to the pits before the soft tyres runs started. Fast laps followed with Sainz cutting the best time down to a 1:12.349 while George Russell, the fastest driver from FP1, slotted into P2.

Pierre Gasly was slightly late joining the FP2 party, only making his first appearance of the session just before the halfway point, as AlphaTauri had some work to do on the Frenchman’s car.

With twenty minutes left to run it was still Ferrari leading the times but Charles Leclerc had just managed to outpace his teammate, the Monegasque with a 1:12.345, four thousandths faster than Sainz’ effort. Lewis Hamilton was P3 within a tenth of the scarlet cars, the Mercedes driver was called to the stewards between the sessions after an impeding incident in FP1.

There was no action taken as the stewards recognised the track lends itself to impeding and given the incident was during practice but the Hamilton has mentioned in both practices that he can’t really hear his radio which could have caused the issues as it would make it hard to receive traffic information from his team.

The session was Red Flagged with just over 12 minutes to go when Yuki Tsunoda beached his AlphaTauri in the gravel at T10. The practice got back underway with four minutes of track time left but there were no real improvements to be seen then.

It ended with Leclerc ahead of Sainz while Norris in P4 split the two Mercedes with Hamilton finishing ahead and Russell behind him. Stroll was the best of the Aston Martin cars in P6 setting a 1:12.746 while both Alpines once again ended in the top ten. Fernando Alonso in P7 just over half a second off Leclerc’s time while Esteban Ocon was P9, the last car within a second of the lead time.

After stopping on near the start of FP1, Verstappen didn’t have an ideal FP2 either as he struggled for pace, only setting a 1:13.042 to see him end the day in P8. The final driver in the top ten was Daniel Ricciardo, who spent most of the second half of the session in the garage with wads of tissue paper stuck into his car as McLaren dealt with an oil leak on his radiator.