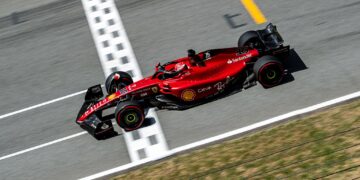 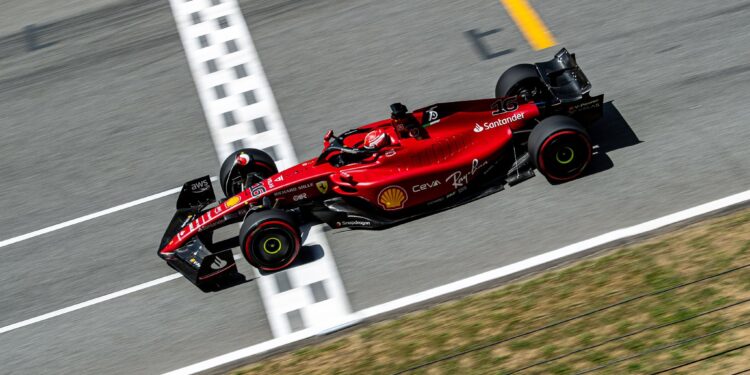 Spanish Grand Prix – Charles Leclerc was fastest once again in practice but Mercedes were the surprise as they went quick than Sainz and the Red Bulls.

The second practice of the day saw the vast majority of drivers heading out of the garages at the start of the session and after five minutes it was only Valtteri Bottas’ Alfa Romeo that remained in the pit lane.

The first lap of the practice was set by Alex Albon, for his only hour of track time after he surrendered his FW44 to Nyck de Vries for FP1, the Dutch driver acquitted himself well in his first appearance at a Grand Prix weekend, ending the session ahead of Nicholas Latifi. Albon’s 1:24.368 on the medium tyres didn’t remain at the top for long and after ten minutes it was Max Verstappen’s 1:20.932 that was the one to beat.

Bottas’ time on track during FP2 was very brief. The Finn didn’t even get five minutes in the second session as he had just set a 1:21.828 to go P6, but then there was a puff of smoke from the Alfa Romeo with Bottas radioing in that “something’s broke” had to retire at the side of the track.

The Virtual Safety Car was called to allow the stricken car to be cleared and then the session was back to green with 45 minutes to run. Not too long after that the soft tyres were brought out and Sebastian Vettel jumped to the top of the times for Aston Martin with a 1:20.703.

Sergio Perez, also getting his first taste of the Barcelona-Catalunya track since testing after F2 driver Juri Vips was behind the wheel earlier, had some traffic and couldn’t beat the Aston Martin on his first soft-clad lap but Max Verstappen could, going almost seven tenths quicker than Vettel. The first sub-twenty second lap went to Carlos Sainz, a 1:19.900, only 0.016 better than the Red Bull but still over a tenth and a half off the best time from FP1.

Just before the half-hour mark it was Charles Leclerc himself who was the first to better his opening session time with a 1:19.670, while the two Mercedes cars slotted in between the Monegasque and his teammate. The reigning teams’ champions didn’t seem to be suffering from as much porpoising as they had been so far during the year, if they have managed to sort that issue out, then they might be able to join in the fight for podiums rather than just scavenging them.

The session ended early for Lando Norris, he had gone across some kerbs and through a gravel trap which had caused damage to his floor. The rest of the field completed their long runs to see them to the end of the hour, both Ferraris recorded complaints about tyre degradation.

When the chequered flag was waved at the end of the hour, Leclerc remained P1, George Russell was P2, 0.117 seconds off while Lewis Hamilton was less than a tenth further back. The Mercedes cars were sandwiched between the two Ferrari’s with Sainz finishing P4, while Verstappen’s 1:20.006 saw him in P5, while Perez was P7.

Between the Red Bulls was Fernando Alonso, once again right in the mix for Alpine, the Spaniard had been handed a reprimand for impeding Hamilton during opening practice, and his best lap was 0.533 seconds slower than Leclerc.

Vettel was P8 for Aston Martin with his earlier chart-topping time while Esteban Ocon and Mick Schumacher were both not too far behind, the Alpine driver set a 1:20.745 compared to the young German’s 1:20.757.