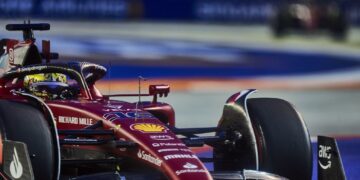 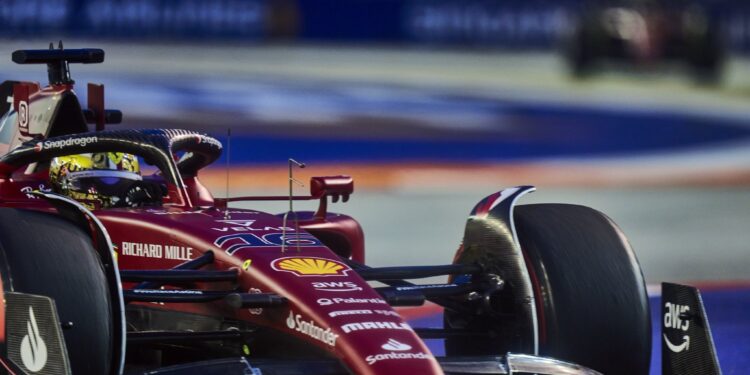 After a wet final practice earlier the circuit had mostly dried up since then and the early cars out, led by the two Mercedes drivers, all headed out on intermediate tyres to figure out where the last of the standing water was.

The first time of the session, a 1:57.099, was set by George Russell and he was immediately demoted to P2 with Lewis Hamilton managing to go over a tenth and a half faster. Just as the clock ticked down to eleven minutes, Charles Leclerc got his first time on the charts, going P1 with a 1:55.054, over seven tenths quicker than Russell’s second attempt.

The top of the times was constantly changing in the final ten minutes but with three minutes left Leclerc was back on top ahead of the two Red Bulls while Sebastian Vettel, Valtteri Bottas, Yuki Tsunoda, Alex Albon, and Nicholas Latifi were in the drop zone at that point.

No one decided to risk it on slicks in the opening portion of qualifying but the times continued to fall as the track got drier and drier. It ended with Max Verstappen beating Hamilton to the best time, the Dutchman’s 1:53.057 just over a tenth better than the Mercedes’ effort.

Mick Schumacher was one of the last to cross the line and it all rested on that lap as to whether he would be continuing in the session or not, and the Haas driver made it work to boost himself from the drop zone into P14, which pushed Bottas into P16 where he joined Daniel Ricciardo, Esteban Ocon, Albon and Latifi in ending their qualifying there and then.

Pierre Gasly was the first out in Q2 and he was joined on track by the other fourteen cars before he had even completed his out lap. The intermediate tyres were still the compound of choice at the start of the second session. Gasly’s opening effort was a 1:54.368 but after everyone had set a time it was Leclerc’s 1:52.343 sitting on top of the pack while the Red Bulls were the closest to him, both within half a second, while Hamilton in P4 was over 1.5 seconds slower than the Ferrari.

WIth six minutes to go Leclerc made the call for slicks but Ferrari weren’t feeling as brave as their driver and instead put a fresh set of intermediates on. While the red car remained on the green-ringed tyre, the green Aston Martin cars made the switch to the red-ringed soft compound.

With three minutes to go Schumacher, Kevin Magnussen, Zhou Guanyu, Russell and Tsunoda were in the drop zone with Zhou having followed the Aston’s lead in switching to slicks in the hopes of making it to Q3.

The slick tyre gamble did not pay off for either the Astons or Zhou, the track still just too damp for them to work as hoped. Lance Stroll, Vettel and Zhou were joined by Schumacher, who couldn’t repeat his last lap escape from the elimination positions this time, but the most surprising non-progressor was Russell in P11. The Mercedes racer reported that there was nothing he could do and he was having the same problem as he’d had in FP1.

While the end of Q2 was too early for slicks, the start of Q3 was almost universally thought to have been the right time with Verstappen heading out first on the softs and all the others apart from Tsunoda and Magnussen, who remained on inters, following suit.

Verstappen’s first time was a 1:56.940, while Tsunoda went two seconds faster than the Red Bull at that point, Hamilton’s opening effort was two seconds quicker again, the Mercedes racer setting a 1:53.082 while Haas brought Magnussen in to swap to slicks instead of setting a time on the other compound.

With five minutes to go, Hamilton, who had seen his initial time beaten by Fernando Alonso and Leclerc, was back on top with a new target for the rest of the field, a 1:51.019. Verstappen was on a potential provisional pole lap but a big moment a few corners before the end saw him only slot in a few tenths behind the seven time champion while Sergio Perez was into P3 with only three minutes to go.

The final few minutes saw everything changing with the last driver on track, Verstappen who had aborted his previous lap, was told to pit as he was on a very quick lap. The irate Dutchman was told they would explain their reasoning later, instead of over the radio. There was confirmation soon after though that Red Bull didn’t think there’d be enough fuel left in the car for the mandatory post-session sample if Verstappen continued on track.

It ended with Leclerc taking pole with a 1:49.412 with Perez and Hamilton very close behind in P2 and P3. Sainz took P4 in the second Ferrari while Alonso was the last of those in the 1:49s as he took P5 for Alpine.

Lando Norris was P6 for McLaren, his time 1.172 seconds off the Ferrari’s while Gasly was P7 just ahead of Verstappen. Magnussen took P9 for Haas while the final spot in the top ten went to Tsunoda.