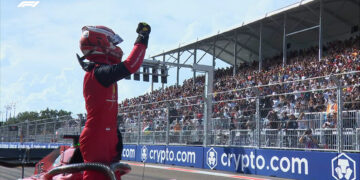 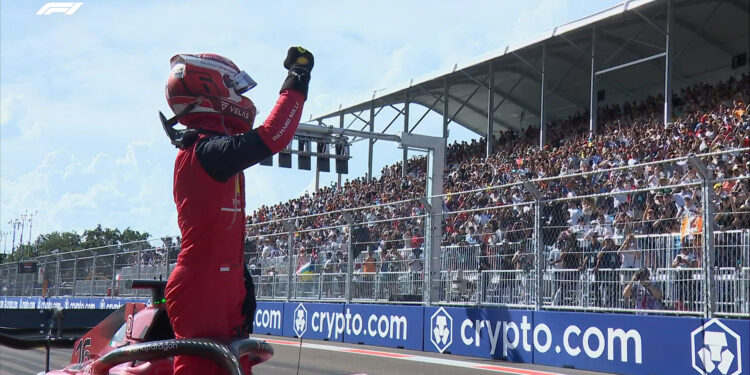 Miami Grand Prix – Charles Leclerc will start on pole in Miami tomorrow with Carlos Sainz alongside while the Red Bulls will both start on row two.

There would only be nineteen drivers competing for pole position in Miami as Esteban Ocon was ruled out by Alpine as his car’s chassis got cracked in his FP3 crash and there wasn’t time between sessions to get it repaired.

Haas’ Kevin Magnussen was the first to put a time on the board in Q1, though his 1:33.148 only spent a few seconds at the top of the charts and after the first round of laps it was Max Verstappen, with a 1:30.235, who was in the prime spot.

George Russell seemed to have re-found the pace Mercedes had demonstrated yesterday after changing car set up since FP3 and he slotted into P3, behind the Red Bulls, with a 1:30.807, while his teammate, Lewis Hamilton could only manage P10 on his first attempt.

Verstappen and Charles Leclerc set the first sub-ninety second laps of the day, the Red Bull driver with a 1:29.836 while the Ferrari managed a faster 1:29.474. Valtteri Bottas was the last to leave the pits, only heading out after half the session had elapsed, but he was quick to get himself up to speed and into the top ten.

It was looking like a potential Q1 exit for Hamilton heading into the final few minutes of the session, but the seven-time champion pulled it all together when it counted, boosting himself from P18 to P5 with a 1:30.388.

There was a lot of traffic to contend with at the end of the session, Zhou Guanyu not being impressed by that and he along with Magnussen, Alex Albon and Nicholas Latifi would not be taking any more part in qualifying.

While Magnusssen ended P16, it wasn’t game over for the only American team on the grid as Mick Schumacher put in a very strong performance to finish P11, 1.171 seconds off Leclerc’s time.

Schumacher was the first out when the second part of qualifying started and, as so, was the first to set a time, the young German managing to shave two tenths off his Q1 time with an opening 1:30.423 effort.

The Haas driver wasn’t the only one to take a good chunk of time off his previous best, with Verstappen putting in a 1:29.202 as his banker, while his teammate, the Ferraris and Hamilton were all in the 1:29.6 or 1:29.7s. Russell meanwhile was struggling with porpoising however he did manage to get a lap together and slot into P7 with just less than four minutes on the clock.

While Leclerc had put in a 1:29.130 to top the session, both McLarens were in a do or die situation on their last laps, Lando Norris managing to get out of the danger zone and into P3, but it didn’t work out for Daniel Ricciardo, who almost didn’t get across the line in time to even attempt a final lap, he did though but it made almost no difference, the Australian moving up one spot to P14.

He was joined in the elimination zone by Fernando Alonso, Russell, Sebastian Vettel and Schumacher, who wasn’t able to improve on his first time of Q2. Alonso felt he was impeded by Sainz, but the stewards disagreed, and decided that there was nothing to it.

The opening flurry of the pole shootout was advantage Red Bull with Verstappen on provisional pole with a 1:28.991, though there was less than a tenth separating him from the two Ferraris behind. Perez slotted into P4, but his lap was a little over half a second slower than his teammate.

After all had set their first times, the track went quiet as the drivers returned to the pits to put on fresh tyres and take a few moments to prep for the final attempts. As the clock ticked down past the three minute mark, the cars started to return to the sun drenched track.

While the Ferraris improved, Sainz had a much better first sector than Leclerc but couldn’t keep the pace up and ended P2. Verstappen meanwhile made a mistake in the first sector and gave up on his lap, so he will be starting on an all-Red Bull second row.

It was another impressive qualifying session for Bottas, the Alfa Romeo driver setting a 1:29.475 to be the best of the rest in P5 ahead of his ex-teammate, Hamilton in P6.

Pierre Gasly, who had been slower than Yuki Tsunoda in the first parts of qualifying, saved his best for last and set a 1:29.690 to see him start P7 in tomorrow’s race. It was P8 for Norris, who ended in an AlphaTauri sandwich in P8, while Lance Stroll rounded out the top ten.