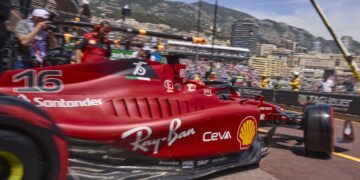 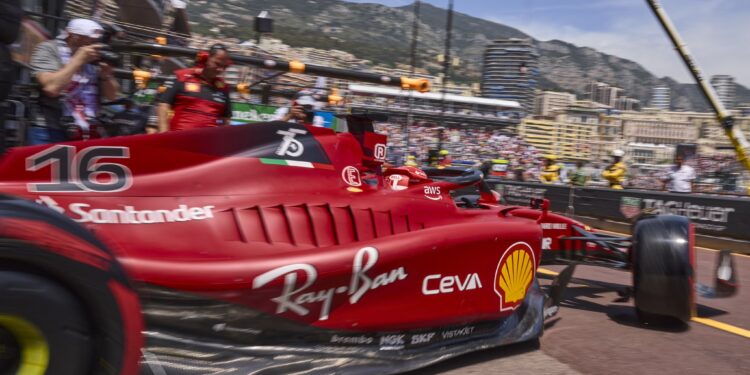 Monaco Grand Prix – Charles Leclerc will once again take pole for his home race as Sergio Perez brought out the red flags at the end of Q1.

Kevin Magnussen led the way onto the track as the lights went green for the start of the first part of qualifying. After two and a half minutes, all cars were circulating after the two Ferraris were the last to emerge from the pits.

After all drivers had put in a first timed lap, it was Red Bull on top with Max Verstappen leading his teammate with a 1:14.295. With the clouds having rolled in since practice, the track was said to have been ten degrees cooler. With ten minutes left to run, Sergio Perez had jumped to the top of the times with a 1:13.292, a time that was equalled by Carlos Sainz a few seconds after the Mexican set his.

It’s not even the first time that drivers have set identical times so far this weekend, with at least three other occasions seen in the practices, with two of those in the final practice earlier today.

Charles Leclerc was the first to get back into the 1:12s with the Monegasque managing a 1:12.939 before shaving almost four tenths off it a few laps later for a 1:12.569. With five minutes of the session, the two Alfa Romeos, Sebastian Vettel, Nicholas Latifi and Mick Schumacher were all in the elimination zone though the Haas driver didn’t remain there long as the young German moved himself up to P7 with a time 0.9 seconds off Leclerc’s.

The Red Bulls, who had been sitting P3 and P4, were the only two to remain in the pits for the final few minutes though they were joined by the rest of the field as the Red Flag came out with 2:25 minutes left. Yuki Tsunoda had hit the barriers at the Nouvelle Chicane, causing a puncture and damaging his wheel but was able to continue and return to the pits.

None of the top five, the Ferraris, George Russell, and the Red Bulls, decided to return to the track but even without them there was traffic chaos and not all cars managed to get around before the chequered flag and that left Pierre Gasly, who had been P5 in FP3, unable to get a final lap in and he will be P17 for the race.

The second part of qualifying saw the return of the sun and the times were quick from the off with Perez just getting the better of the Ferraris on the first runs with a 1:12.059, with Sainz and Leclerc both within 0.033 of the Red Bull driver’s time. However, the Monegasque was the first to get under seventy two seconds for the weekend with a second attempt on his softs to take the top of the times with a 1:11.864.

With just five minutes left, it was Magnussen, Bottas, Tsunoda, Ricciardo and Schumacher who were in the drop zone. Leclerc lost time in the pits after initially missing his call to the weighbridge though he did stop before returning to his garage and the Ferrari mechanics pushed him back to the FIA zone so they could weigh his car before any work was done.

All cars were back on track for the final two minutes, with Red Bull being the last out. Vettel had been in a dangerous position but was able to put in a good time to see him move to P8, but it was the the same drivers as at the five minute mark who fell short, though Tsunoda and Bottas had gone quicker then Magnussen so they will be P11 and P12 to the Dane’s P13.

All but the Alpine cars were out as the session went green, with Leclerc the first onto the track when the top ten shootout started. The Monegasque setting a 1:11.376 as his banker lap, over half a second faster than his Q2 lap, while Sainz slotted into P2 ahead of the Red Bulls, all of their laps though over two tenths slower than the provisional polesitter.

After the first laps, all but Perez, headed back to the pits but the Mexican remained out to try another lap though there wasn’t enough life left in his tyres to see him improve on his P3 time.

Lando Norris had a very eventful end to a late lap with understeer and oversteer in the final few corners but still saw the McLaren driver improve to P5. In the final minute both Leclerc and Perez were putting in quick segments but once again Perez slid and whacked the barriers just before the entrance to the tunnel, a few seconds later Sainz saw the yellow flags too late and went into the stricken Red Bull as he tried to avoid him. That blocked the track and the Red Flags were once again flying with only 30 seconds on the clock, so the qualifying ended there and then.

Perez will start P3 with reigning champion Verstappen, who hasn’t seemed to be on the pace of his teammate or the Ferraris so far this weekend, beside him in P4, Norris, who is still not recovered after catching tonsillitis ahead of last weekend’s Spanish Grand Prix, put in a great time to start P5, 0.473 seconds off the Ferrari’s time despite that.

Russell will be the higher of the Mercedes after he set a 1:12.112 for P6 with Hamilton back in P8 behind Fernando Alonso, the Spaniard had his own incident in the final minutes of of qualifying sending his Alpine nose first into the barriers at Mirabeau. The final two spots in the top ten went to Vettel in the Aston Martin and the Esteban Ocon in the second Alpine.