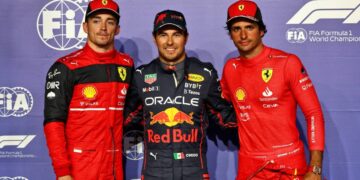 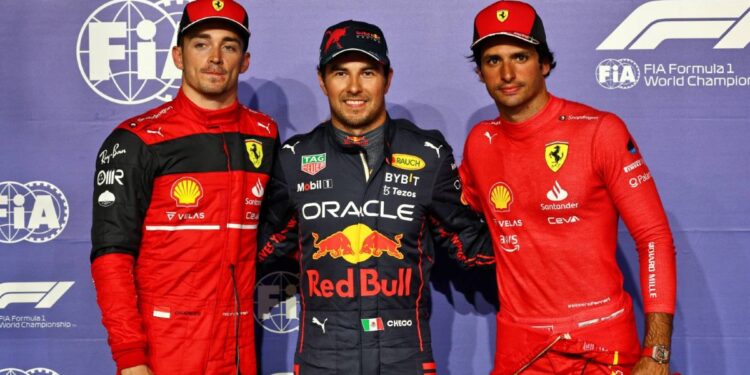 
Saudi Arabian Grand Prix – Charles Leclerc looked set to have two consecutive pole positions this weekend, after turning up the wick at the end of Q2.

The battle appeared to be with his teammate in Q3, the two Ferrari’s traded the fastest times on the opening runs, Sainz topping the timesheets as the cars returned to the pits.  Verstappen’s Red Bull was struggling for pace and requiring more warm up laps, while Perez although faster, was unable to take provisional pole.

On the final qualifying laps of the night, Charles Leclerc started to light up the sector times, going faster than his teammate’s provisional pole lap. Sainz meanwhile was unable to improve.

Sergio Perez then pulled out a blinder of a lap to take pole away from Leclerc in the dying seconds of qualifying by just two hundredths of a second.  It was the Mexican’s first pole position of his career, on his 215th attempt.

Speaking after qualifying, Leclerc confessed he was “disappointed” to lose pole by the smallest of margins, acknowledging the risks Perez took to secure pole:  “I’m a bit disappointed. Only two hundredths, it’s so close. I am pretty sure Checo’s lap is exceptional, I mean the last sector, pretty sure he took a lot of risk and was rewarded by it, and this is how it works on those city tracks.

Arghh, so close ! But what a lap from Checo, fully deserves the pole today.
Very happy to see Mick getting out of the car after this big crash.
Race is tomorrow and I’ll give it all. pic.twitter.com/IFdM5oSeWq

Reflecting on challenging Red Bull in the race, Leclerc said he will planning a ‘full attack’ to take the top spot away from Perez.  “I think on our side there is plenty to learn from this qualifying.”

“Yes, it is full attack, as always. The race is tomorrow… so hopefully we can have a better day tomorrow.”

The Monegasque said the difference between pole and second place was from the used tyres on the Ferrari: “For some reasons we were quicker on the used tyres than the new tyres, so we need to understand why, and also lacking a little bit of slipstream in the last run of Q3.

And everything makes a difference, but that does not change anything on how amazing Checo has been today.”